Pointing Hands are a popular collecting area - BUT... 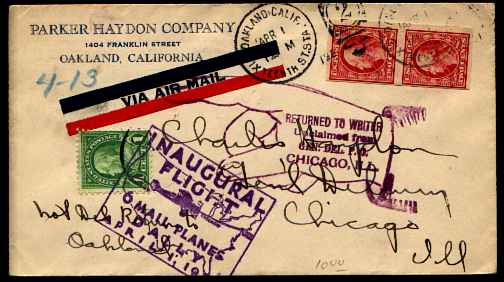 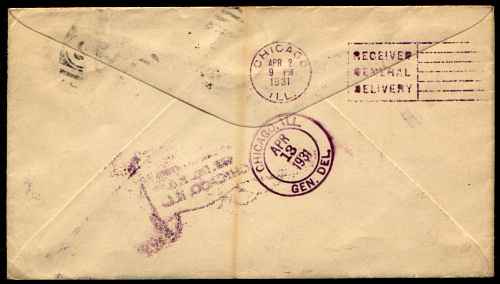 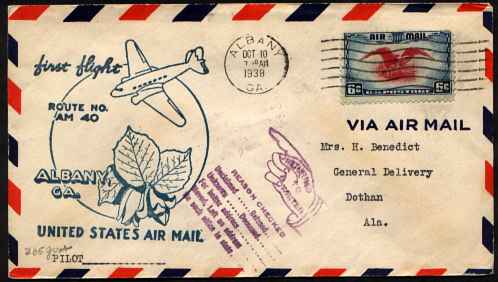 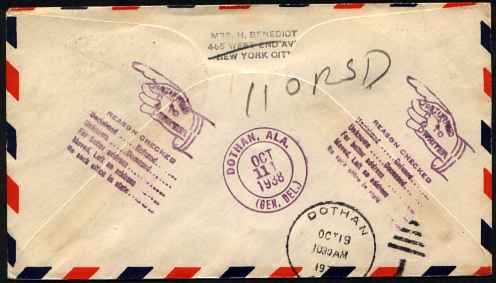 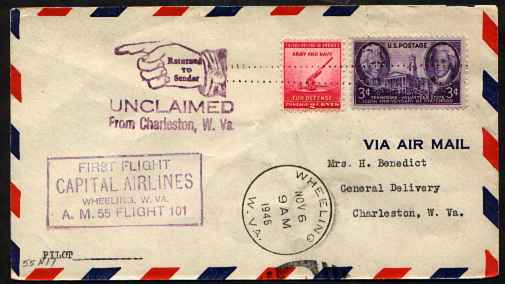 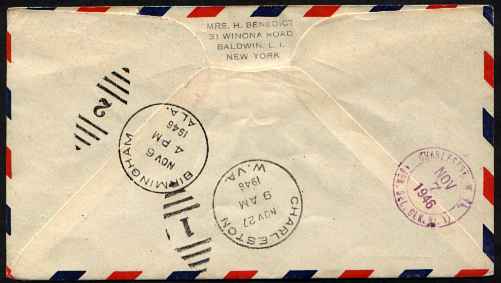 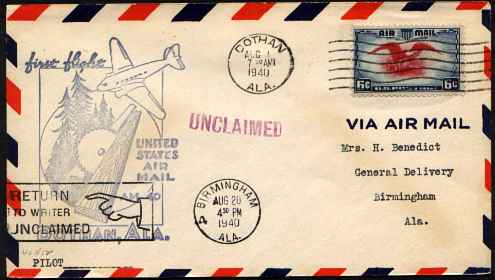 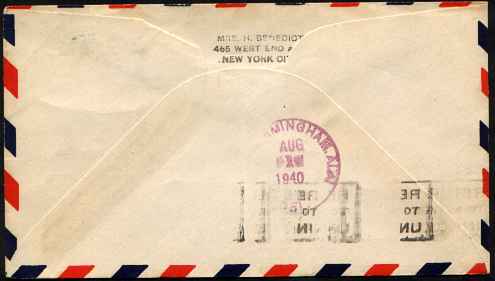 All of these First Flight covers have pointing hands because they could not be delivered as addressed, and were returned to the sender. Why would someone go to all the trouble and expense of sending a First Flight cover, and then not claim it? Based on the number of these that I have acquired with little effort, it appears the practice was common - perhaps it is a formal subset of First Flight cover collecting. And in fact it is economical, since it exploits the Post Office policy of returning unopened mail at no additional charge! The major disadvantage I see is that the return markings may obscure the First Flight markings.

Note that all of these covers are addressed to "General Delivery", which was an accepted practice at the time for travellers who wanted to receive mail during a trip. They might not know where they would stay, or when, so they simply told people to write them at General Delivery at some place they knew they would be passing through, and the letter would be held at the main post office of the town or city for some minimum period, perhaps a month, where the addressee could collect it by showing some form of identification.

You may wonder why I show both sides of these covers - that's traditional when discussing postal markings, since they often appear on both sides, and seeing them all is necessary to the complete story of the cover.

If you would like some First Flight covers on which the cachet includes a train, click here to open a page that shows them.

LATER - it turns out these are typical First Flight covers - Yes, it was common practice to send them to General Delivery, and have them returned, pointing hand and all - for a full explanation of the entire process go here. 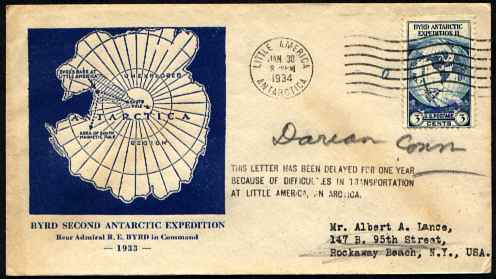 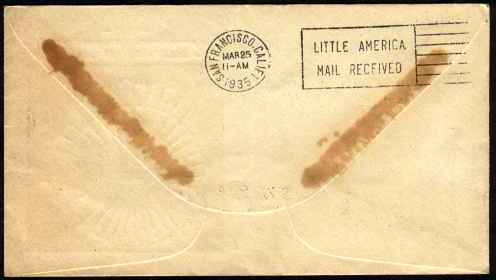 In 1934, the Post Office issued a special stamp to publicize and honor Admiral Byrd's heroic expeditions to the South Pole. Originally the stamp was intended excusively for use on mail originating from the Second Expedition, from late 1933 to early 1935 - one could have a souvenir cover postmarked at the Expedition base camp, Little America, for an additional fee of 50c. Public outcry led the Post Office to change the policy, and the stamp was released for normal use as well.

The interesting thing about the cover above, one of 56,000 such covers submitted to the
USPS in late 1933 (the deadline was November 1) for the 1934 Little America cancel, is the handstamp on the front,

THIS LETTER HAS BEEN DELAYED ONE YEAR
BECAUSE OF DIFFICULTIES IN TRANSPORTATION
AT LITTLE AMERICA, ANTARCTICA".

I have seen differing stories about what happened. One contends that most of the covers sent for the initial souvenir cancellation were delayed in the States, could not reach Antarctica before access was cut off in 1934, and were held until the following year, but were still postmarked with the date originally intended. Another contends that all the covers reached the base, but many could not be cancelled in time to get on the return ship. Whatever the case, most of the covers I have seen with Jan 30 and Jan 31, 1934 postmarks have the "delayed" handstamp, so ones without the handstamp, that were actually cancelled and returned in 1934, may be scarce.

THIS JUST IN - the April 15, 2002 issue of Linn's Stamp News contains an article about these covers. According to its author, Kenneth M. Pollock, whose father was directly involved in the whole story, all the covers did reach Little America on time, and the delay in returning most of the 1934 covers to the US was caused by an administrative foul-up - Byrd's men simply forgot to load the covers onto the return ship! He says that all the stories about bad weather and other problems are simply fictions created to avoid embarrassing Byrd and his men.

6/28/2004 - BUT WAIT, THERE'S MORE! - I just discovered Paul Skowron's web pages on this topic. Here is a link to the first of four pages with another version - the full story (everything you could want to know) of the Admiral Byrd stamp and its use on Little America covers. Apparently the problem was not that anyone forgot to load the covers, but that the guy in charge of cancelling them was incompetent, and botched the job so badly that Byrd decided it was better to delay them a year than send them! And note what he says about the "little blue marks" - the one shown above has a very clear one between two of the wavy lines of the cancel, but none of the others I own shows one - probably under the stamp. And my questions are answered - of about 56,000 covers submitted in 1934, only about 6,000, all dated Jan 31, 1934, were actually returned in 1934. The rest are like mine.

So it appears that covers with the 1934 cancel and without the DELAYED handstamp are relatively scarce.

9/1/2006 - AND STILL MORE - today I received the following email from the author of the Linn's article quoted above:

I just saw your historical piece on the reasons for the Byrd cover delay from Little America. I am the Kenneth Pollock who wrote the piece in Lynn's. Here are some additional details about the affair.

My father, who was the stamp editor for the New York American, a Hearst newspaper, was approached by Admiral Byrd through CB Eilenberger, who was the Third Assistant Postmaster General and a close associate of James Farley.

Admiral Byrd told my father that he was essentially trying to avoid embarrassment, and even more not to embarrass Farley, who had agreed to help sponsor the expedition by issuing the postage stamp and then the souvenir sheet(the sheet was my father's idea... Max Johl writes about this in one of his volumes). My father told me that he personally concocted the entire story about the ship being stuck in the ice...hence the year's delay getting the covers back. What I distinctly remember is that my father told me that Admiral Byrd said that the crates were simply forgotten. What we do not know is if Byrd obscured or hid the "cancellation screw-up" story from my father, or whether this latter piece is simply not true.

Incidentally, when I was at FIPEX with my father(1957??), he pointed at a large display of Antarctic covers and told me that those specific covers had, in fact, been stolen from Admiral Byrd, and that Admiral Byrd has asked my father to see if he could ever help him recover the covers. I do not recall who the owner of the covers was at that time, but do think my father believed that the exhibiting owner was probably not the thief.

My thanks to Mr. Pollock for this fascinating inside view of the affair. 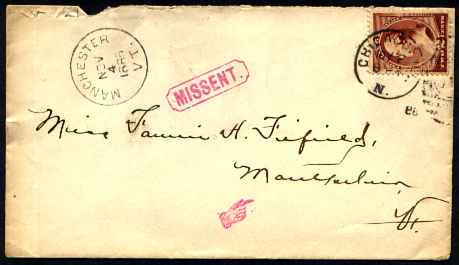 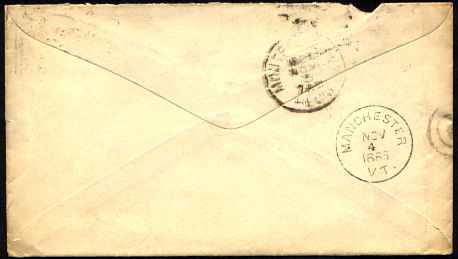 Not all Pointing Hands are synonymous with "Return to Sender", though that is the most common use of the marking. Here's a nice example of a letter that was simply misrouted initally, and handstamped to draw attention to the correct destination. Thanks to the practice of backstamps, which were routine on all domestic US mail until 1913, we can see that the cover originated in Chicago on Nov 2, 1885 (the year is not discernible, but is clear on several of the other datestamps), and was mistakenly sent to Manchester VT, where a receiving backstamp was applied on Nov 4. The cover was then datestamped on the front and rerouted to Montpelier that same day. It was received and backstamped at Montpelier on Nov 5.


Backstamps as a legal record

You remark that a backstamp is used currently only on registered mail.

This is mostly true, but a backstamp can be *requested* on any seal and will normally be done by the clerk as a courtesy. What's interesting is that there can be really good reasons for obtaining one, from a legal standpoint.

For example, let's say that a person wishes to document that he thought of something at a certain time (an idea for an invention is a good example). He could make a note of the idea, place the note in a sealed envelope, and get the seal of the envelope date-stamped when sending the envelope to himself {or simply have the clerk hand it back}. This unopened envelope has the same status in law as any document under seal - the round date demonstrates that the envelope's contents were sealed on the date shown in the postal jurisdiction shown. (Round daters are under lock and key and are diligently kept accurate. Their legal status is appreciated by most clerks.) Mechanical stamp cancellations are considered much more casual and do not have the same legal weight. (You and I have both seen many cancellations that are incomplete, inaccurate, or illegible.)

I looked in the postal regulations on the USPS web site, and found nothing there, but diligent Googling led me eventually to the site of the American Philatelic Society, which quoted this paragraph from postal regs:

Backs of Envelopes. Post offices may cancel unused stamps when they are affixed to the reverse side of envelopes bearing already canceled stamps. This service is available only for envelopes presented for handback service. They may not be returned through the mail, even when outer envelopes are provided. Such a cancellation denotes only that the item was presented to the post office for postmarking on that date; it does not denote that the envelope was carried by the Postal Service...This type of cover may be presented, for instance, in situations re-enacting Pony Express routes, promoting special airline flights, balloon ascents, adn the like, on which covers are carried outside the mail service.
http://www.stamps.org/Education/images/usps_rules.pdf

That seems to cover David's idea, but only if there is a stamp on the back, i.e. postal clerks are NOT allowed to apply postmarks willy-nilly.