The letter X has been used in many ways on stamps and in postal services.

As a Roman numeral, of course, "X" means "10", and was so used on the ten-cent value of the first US stamp issue. That is the only time it has been used on U.S. stamps for the denomination, but the Roman numerals for 1 and 3 were used once.

Some early stamps of Austria, such as Scott 11, issued 1858, were printed with large X's in unused spaces on the plate, supposedly to render the excess paper useless to counterfeiters. Or it may have been to balance the wear on the plate used to print the stamps. These X's are called St. Andrews Crosses. Some call the stamps bearing them "Kiss Stamps". Collectors pay surprising prices for them, even detached. This image shows where the X's were positioned on the plates, and demonstrates what I mean by "unused spaces". The goal was to create an 8x8 pane with 60 valid stamps, its total value a multiple of Gulden, since prior to 1858 60Kr = 1 Gulden.

To a collector who uses the Scott Catalog numbering system for stamps, "X" denotes the Postmaster's Provisional stamps issued during the mid-1840's, immediately prior to the release of the first official US postage stamp.

X was also at one time a simple and popular way to pen-cancel a stamp, and this gives us the term we chose for our alphabet - "X-cancel." Pen cancels are generally anathema to collectors, though there are cases where, because of scarcity or some special significance, they are acceptable. Below are some examples of these cancels, with my thoughts on how they affect the value of their bearers.

Incidentally, while I have not been commenting on the artists' images, I think the one above deserves an explanation - it is a composite of two stamps, the red part being the 1921 ½¢ US Nathan Hale issue, Scott 551, and the blue being an issue of the same period by Russia, Scott 186. The artist's concept was that the two stamps cancel each other out, as their countries' ideologies did - so this is an "X cancel".

The ideal cancel on the earliest US stamps is a clear handstamp that ties the stamp to its cover cleanly, unambiguously, and attractively. The two covers below - NOT with x- cancels - are the ultimate in this regard, apparently. The catalog value of #1 on cover is only $600, but these two sold for almost identical amounts, over $18,000 each, in a 1993 auction. 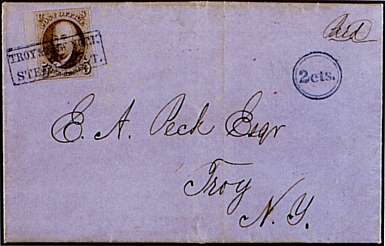 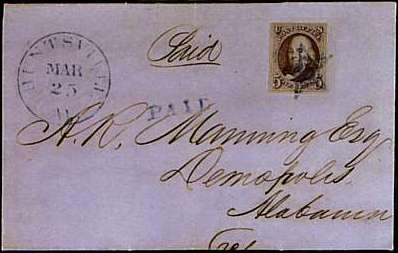 The TROY & NEW YORK/STEAMBOAT cancel on the left-hand cover is the key to its success ( early Steamboat cancels are rare and highly prized), plus a stamp with four clear margins. For the cover on the right, the "blue 5- point star with negative stars and numeral 5" cancel is the key, AND the auction description says there is a "lightened ms. X cancel" to boot, telling us that the "X" is so undesirable that altering the stamp chemically, usually the kiss of death to anything philatelic, is preferable to leaving that "X" - presumably this item would have fetched a lower price if the "X" were still there! 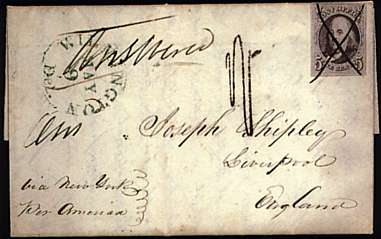 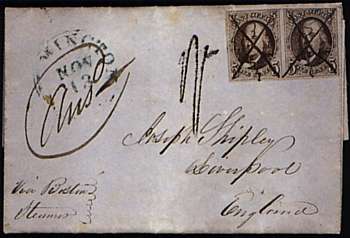 Here, on the other hand, are two covers, both from the same correspondence, one with a single of Scott #1, the other with a pair, both with x-cancels. They too sold for identical amounts, $2,300 + 10%, in a 1996 auction. The cover with a pair has not only the x-cancel, but ink squiggles as well, and its stamps are not clearly tied, though apparently one of the squiggles does just tie the stamp on the left. Replace those x's with stars or STEAMBOAT's, and the value of these would double or triple.

The cover below sold for $23,000 + 10%" in 1993, so I figure it's worth showing it to you twice. What makes it worth so much? First, there are fewer than 24 known blocks of 4 or more of this stamp, the first US postage stamp issued, and the largest block in existence is only 16. So scarcity is definitely a factor. Second, lots of cool handstamps, several with the date, plus a nice PAID. AND it turns out this is the only known block on a transatlantic cover, so the usage is also very scarce. 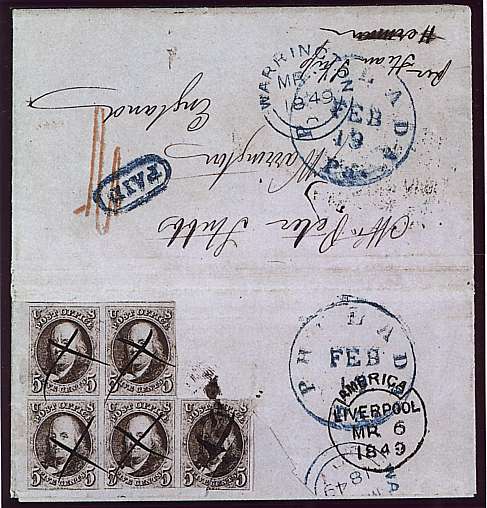 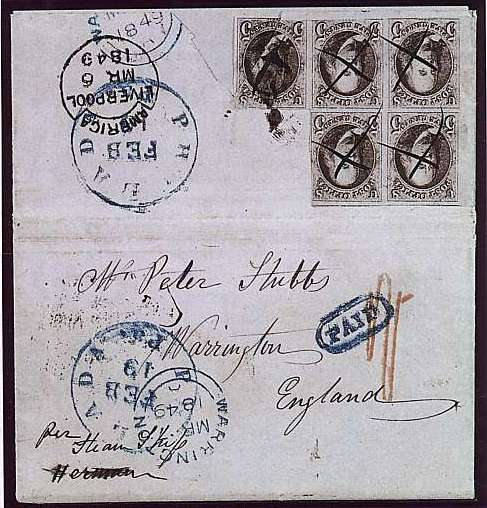 On the other hand, the estimated value of this cover in the auction catalog was $40,000- 50,000, so it realized barely half of the expected amount, in a market that was pretty strong. Why? First, in my opinion, those x-cancels. They're not attractive, and though the catalog description says one of them ties its stamp to the cover, it sure doesn't do it very well. Second, the condition - look at the area in the middle of the bottom of the image on the left, and you can see that one of the stamps was half torn away when the letter was opened. What looks like a complete stamp there now is really parts of two different stamps - what's left of the original stamp plus a second one on a separate, matching piece of paper behind. It's a clever device to improve the appearance of the item, but it doesn't correct the defect.

This is not really a cover, of course, it's a folded letter, which explains the odd, upside-down relation of stamps to address - the stamps are on the back-flap, which was folded down and sealed to the side we cannot see here. The result is unattractive, and that's another reason for the low realization, I think. Scarcity alone is not enough, something that expensive has to look good too. The describer in the catalog did an excellent job of pointing up the item's good points, and playing down its weaknesses, but those weaknesses still showed. 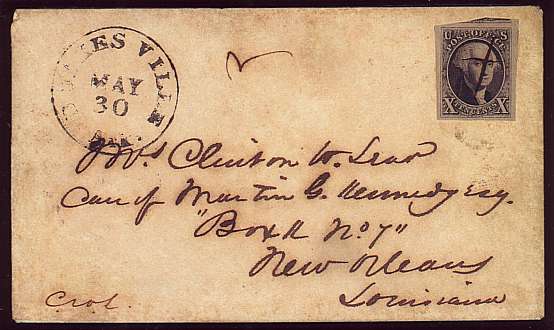 In this case, the auction estimate was $4,000-5,000, but the cover sold for $8,000 + 10%. What made the difference? Mainly, it's the origin - this is "the finest" of only seven known covers with this stamp (Scott #2) from Indian Territory (Doaksville, Arkansas was in the Choctaw nation). And, though the x-cancel doesn't even come close to tying the stamp, it turns out the ink actually bled through onto the envelope, so it is, in a sense, tied. Moreover, all the known covers from this location are part of the same correspondence, so they authenticate and date one another. Sometimes the factors that affect valuation are relative.

This folded letter with bisect was expected to realize $12,500-15,000 in 1992, but failed to meet its reserve, and did not sell at that auction. I wonder what the actual bids were. I think the reason is the fact that there are enough better-looking bisects that people would rather have one of them than pay that much for this - yes, it's the X- cancel.

Recent scholarship suggests that some of the early "x-cancels" on the 1847 issues may have been Pre-cancels, i.e. markings applied BEFORE the stamps were sold and applied to their covers. This would help explain why so many are not "tied".

But why precancel them? Even 5 cents was a LOT of money in 1847 - I found a web page citing US Department of Labor statistics that claims $1 in 1850 is the equivalent of about $20 now; that seems WAY too low to me. Another article I found said that in 1880, 80-cents per day was considered a decent wage! Remembering that the work week was six days, that's still only $250 a year. I suspect that's the equivalent of about $25,000 a year today, so I'd say the ratio is more like 100 to 1, and I think it's fair to say a nickel in 1850 was the equivalent of at least $5.00 today - hence a pane of 100 such stamps was worth $500 in today's terms, and that's enough to make it worth the extra trouble to protect it. The precancels are presumed to originate with railroad Route Agents, who collected mail on trains, and would have needed a supply of stamps on hand - but would have wanted a way to render the stamps useless to anyone else, hence the precancel - only the agent himself could make valid use of the stamp once so marked.

For more on this topic, see the article "The Naugatuck Railroad Precancel" by Bernard Biales, in the November, 2000 issue of The Chronicle, journal of the U. S. Philatelic Classics Society.

SO WHAT'S A DOLLAR REALLY WORTH?

I maintain in the section above that a dollar in 1850 must be worth at least $100 today. Admittedly, comparisons of wages and prices of 1850 to today's are difficult, at best. The U.S in 1850 was still primarily agrarian, and a significant part of many people's trade was barter; nonetheless, I think my estimate of a 100:1 ratio is far closer to reality than the DOL's of 20:1.

Consider this - in English novels of the late 19th century, 100 Pounds a year is considered a substantial income, enough to support a family - a very middle class income. Well the British Pound was worth $4.86 in 1890, so 100 Pounds was worth $486. Shall we say $40,000 a year today would provide one a solid membership in the middle class? So by that standard $1 in 1890 is the equivalent of $82 today. Let's carry the issue a little farther, though. Here are some other numbers, for comparison:

All the statistics I can find say that the value of money, aside from some spikes during times of war, remained relatively constant before 1913, when the US DOL started keeping statistics. see this chart, for example. So is steady inflation a uniquely modern phenomenon?

Maybe it's not as simple a question as I thought.


Here are some links, if you want to explore this topic further:

Calculate the relative value of an amount of money in any two years, 1800-2000

Current Value of Old Money, a very scholarly treatment of the subject, with links to other related sites.

Here's an interesting one - Minimum Wage, 1938-present - it looks like the minimum wage, though it has increased steadily in "current dollars", has been falling in relative dollars since 1968!

From a page maintained by the US Diplomatic Mission to Germany, Income and Prices 1900 - 1999 . (This was the source of some of my numbers in that table above.)