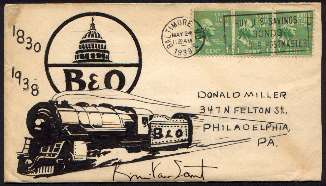 Here's a cover I acquired recently from Al Peterson (aka The Rail Philatelist). It's a little stained, and browned with age, but not only does it have the very attractive, hand- drawn cachet honoring the 108th birthday of the railroad, it contains the following letter:

When you receive this letter, you will have some misgivings at first that I did not carry out your wishes as to its mailing so that the cachet would be post-marked on the anniversary of the running of the first train on the Baltimore and Ohio.

But the anniversary date happens to be May 24th, not the 22nd as indicated in your letter. The first train of the Baltimore and Ohio was horse-drawn from Baltimore to Ellicott's Mills and return, May 24, 1830. Our records substantiate this as the correct date. Two other very important events in B&O history are also commemorated on this date.

It was on May 24th, 1844, that the first telegraph message in the world - "What Hath God Wrought" - was tapped out by the inventor Prof. S. F. B. Morse, and sent from the offices of the Supreme Court of the United States, in Washington, over wires strung along the B&O right-of-way to a B&O station that then stood on Pratt Street, near Light Street, in Baltimore.

On May 24th, 1931, the B&O inaugurated the operation of the first completely air- conditioned train in the world, the "Columbian," between Washington and New York.

I thought you might like to have this additional information, especially in view of the fact that you went to so much trouble in preparing your cachet.