From time to time I receive inquiries from viewers of this web site who want help identifying a stamp they own.
Usually I can answer them, occasionally I have to consult some expert, but now and then the item in question remains a mystery. This page is where I put the mysteries.
THE MOST RECENT ENTRY IS AT THE TOP.
If you can identify something shown here, or wish to contribute your own mystery, please email me: 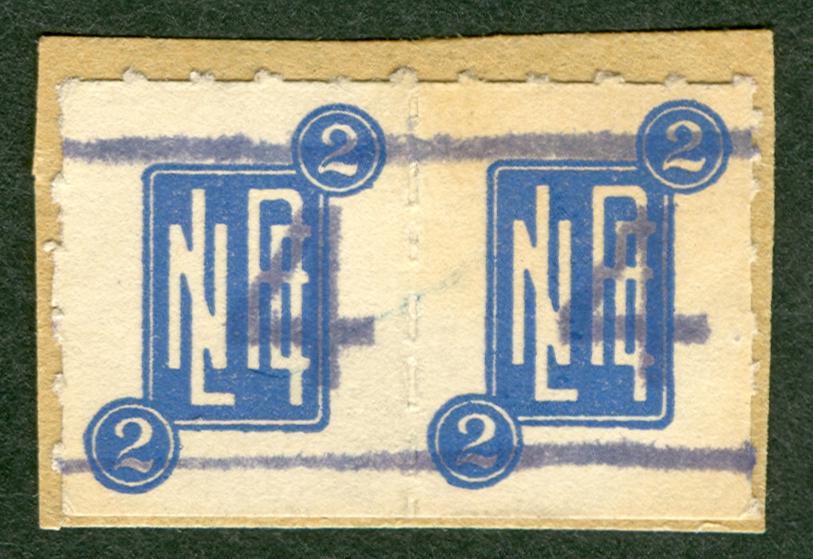 I owned item 2a until a few years ago, when I sold it on eBay.

I have been trying to identify it for at least twenty years.(!)

I acquired it many years ago from Al Peterson (aka The Rail Philatelist), who knew only that he got it as part of a collection of rail-philatelic material, so assumed it had a rail connection.

Here are details, and my analysis:

Pair of self-adhesive labels "on piece." Blue on white, four letters (see below). The size of each label is about 13 mm wide by 18 mm high. Pair of 2's stricken out with horizontal blue lines, new denomination "4."

The two letters on the left are N and L - I don't think there's any question about that. The two letters on the right are tricky, though. The large one could be an R or an A. I think it's an R, but I could be wrong. The smaller letter on the right could be an E or a C. I have a slight leaning towards E, because the cross bar of the R extends beyond the leg of the R to form the cross bar of an E. But it might be a C.

Combining all of those options in all reasonable ways, I get the following sixteen letter combinations:

The only one of those that means anything to me is "LNER," for " London and North Eastern Railway."

I have asked the "experts" I know (Roger Riga and Bill Weinberger), and I posted an inquiry on the web site of the "The LNER Encyclopedia - Discussion and reference site for the London and North Eastern Railway"

No luck so far.

NOW (2/10/2019) paraphilatelic maven Ray Petersen has come up with the second item, and this further analysis:

While recently browsing Alphabetilately I notice the small odd label in the Name That Stamp section (item #2). I remembered that I used to have some of those (or something similar) and wondered whatever happened to them.

Lo and behold, only a few days later, while rusting through some unsorted stuff, looking for something else, I ran across them.

They are the same base stamp/label, but instead of an overprinted 4, mine have the number 5. And it appears that mine (2 strips of three and a pair) were originally a strip of 8. I have scanned them they way they most likely were when joined. Looking at the scan, it becomes clear that the overprint is a numeral, repeated 5 times, in a box - enabling 5 stamps to be cancelled or overprinted at a time.

Mine have no gum, and do not really look like they ever had gum - the backs are smooth and clean.

So, the good news is that some significant new information is added, but the origin and use of these is still a mystery.

I thought they looked like they could be either:
A) Dues stamps - for an organization or trade union.
B) Savings or trading stamps (like S&H Green stamps).
So I looked through my stash of Danish dues stamps and savings/trading/rebate stamps and discovered that while only some of them had a clear indication of the issuing organization, they all had either a denomination, or a time reference (such as year or month, etc).

The key to these stamps must be the cryptic monogram or monograms on the stamps. My personal bet is NL RE.

I showed your post to a friend last night and he and I both had a nagging feeling that they might be Dutch in origin. Nothing to base it on other than a vague feeling that the first letter pair might be NL for Nederland.

I guess we will just have to wait and see if one turns up actually used on some sort of document.

SO.... the plot thickens. Can anyone else out there help?