Spanish Charity stamp - Is there a train?

The stamp shown four times below (YT57) is part of a set of six charity stamps issued in Spain in 1938. This is the one peseta value. Supposedly there is a train on the stamp, and those who can see it are adamant it is there, while those who cannot (including me), are equally adamant it is NOT there. How about you? The train is supposed to be on the mountain side in the left center of the stamp, emerging from a tunnel, traveling slightly downhill, right to left. I've supplied both low- and high-resolution images, as sometimes less is more, while other times more is more. The pencil sketch was done by Norm Wright, Sr., ATA Trains on Stamps Handbook and CJRRU New Issues Listing Editor, to help me find the train. Norm is one of the ones who see it. If someone can identify the place depicted on the stamp, and confirm that a railroad tunnel does (or does not) exist there, that would help support one side or the other. Anyone? 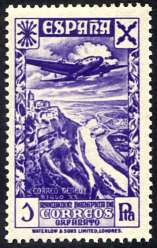 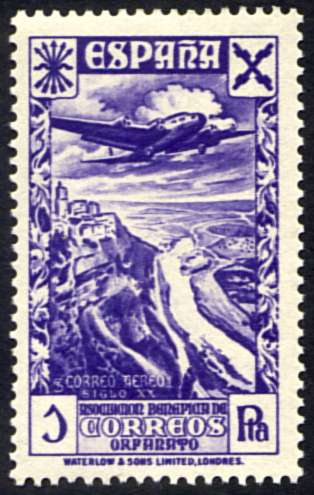 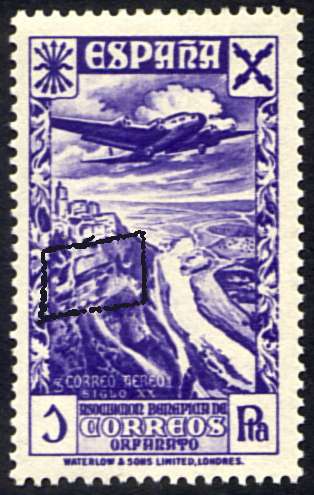 To me this is like the old story about Abraham Lincoln:
He was debating an opponent who was somewhat careless about his facts, so Honest Abe said
"Tell me, friend, if you call a goat's tail a leg, how many legs does that goat have?"
The man replied "Why five, of course!"
Lincoln replied, "Ah, but that's where you're wrong - calling a tail a leg does not make it one."

And I say - Calling a shadow a train does not make it one.