I have always been intrigued by covers that combined a rail theme with an air theme. It struck me as a little risqué, the implication of some sort of liaison between the two competing modes of transport. It was of course merely natural that the old and the new should co-exist and even cooperate in the early days of air travel. The covers below illustrate some of the ways trains and planes have worked together.

I acquired the three items below separately, and only when I decided to create this web page did I recognize their connections to one another. 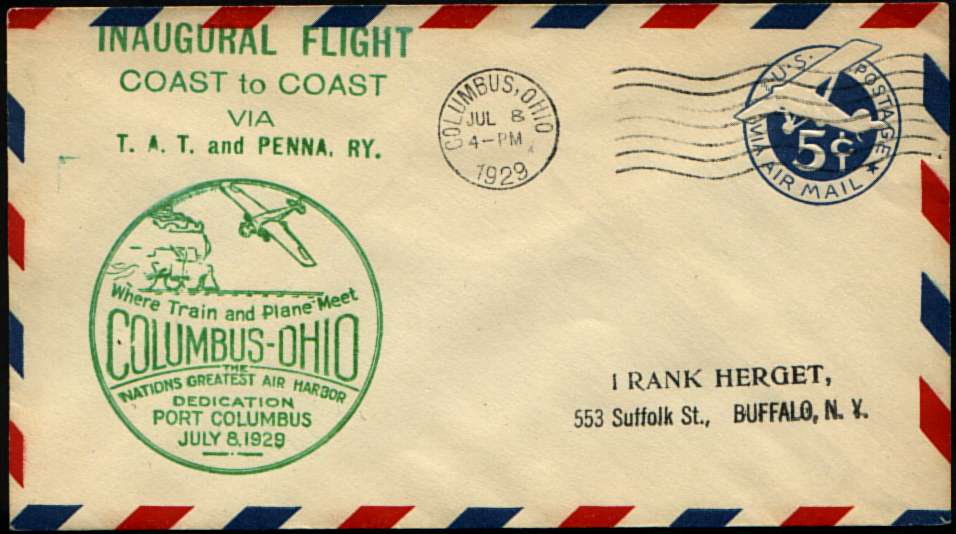 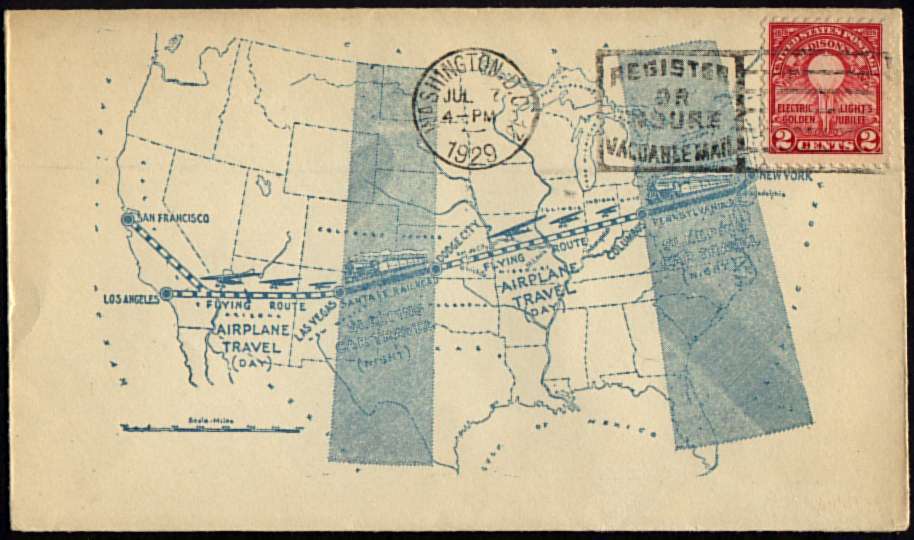 July 7,1929, was apparently the first day of coast-to-coast passenger travel in the US via plane - well, sort of. Planes could not yet fly safely at night, so the journey was a hybrid of train and plane travel. Here's the story as my friend Al Peterson (aka The Rail Philatelist) told it to me when he sold me the label in the center (I probably bought the two covers from him as well):

As I recall, this was the first transcontinental airline passenger journey. The airline (Transcontinental Air Transport Inc. - TAT) later became the recently defunct TWA. They hired Charles Lindbergh as a consultant and he helped them select the Ford tri-motor airplanes they used. Since the planes had limited range, they weren't safe to fly at night and over mountains. So arrangements were made for passengers to take the Pennsylvania RR from New York City at night thru the Allegheny Mountains to Columbus, OH where they boarded the Ford Tri-motors for the flight to Dodge City, Kansas with one or two refueling stops during the day. In Kansas, they boarded the Santa Fe RR for a night trip thru the mountains to Las Vegas, New Mexico, then again flew Ford Tri-motors on to LA and San Francisco. There are two types of covers, one with the Columbus rubber stamped cachet, usually in green but also in purple, the other printed with the route shown and the night portions shaded in blue. I have the latter with July 7, 1929 cancels from New York, Buff & Wash RPO and Washington, D.C. and July 8 cancels from Columbus, OH, Dodge City, KS, Las Vegas, NM, Clovis, NM, Kingman, AZ, Los Angeles and San Francisco. Back of the covers says "Limited number printed by E. C. Emeigh, Box 1263, Washington, D.C." The label is quite scarce -I've only seen a couple of them. The covers aren't common either.

What strikes me as strangest about the two covers is that neither could have travelled on either the train or plane involved! The airmail cover on the left could not have travelled on the plane, because not only did it not fly that route (Columbus to Buffalo), it did not carry mail, only passengers. The cover on the right apparently did not travel anywhere, it was just a souvenir hand-back. 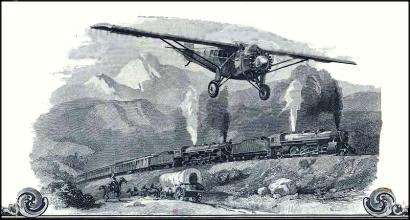 The image above is from the first stock certificate of Transcontinental Air Transport. TAT was the first airline formed expressly to provide passenger service. All other airlines of the time were created to provide mail service, and carried passengers only as a sideline. Here's a little more history of TAT from a web site that sells old stock certificates, and was the source of the image above. I think the image is supposed to show the progress of passenger travel, from horse, to wagon, to train, to plane. But keep reading.

An excellent web page about the TAT-PRR venture HERE.

There was an extensive (60 page!) article about TAT-PRR in the Keystone, the national journal of the Pennsylvania Railroad Technical and Historical Society, but the price of a single copy of that was more than I could afford. (Vol 36 # 2)

AND, from the PBS website, this interesting perspective on that first transcontinental passenger service:

TWA's long history began in 1930 when Transcontinental Air Transport and Western Air Express merged in a "shotgun wedding" at the strong urging of the U. S. Post Master General, Walter Folger Brown. The new airline would fulfill Brown's vision of providing one of several direct cross-country routes. Transcontinental Air Transport, or TAT, had been offering coast-to-coast service via train and plane for the previous year. But because of frequent flight cancellations, TAT's service came to be derisively known as "Take A Train."

You will find more interesting US airline history at http://www.century-of-flight.net/new%20site/frames2/airliner_frame.htm
and more about TAT at Wikipedia (where else?!) and here

The two covers above are the only ones I have seen documenting the development of passenger travel by air, but there may be many more. Most would not have a rail connection, so I wouldn't notice them.

My name is John Kircher and I collect US Airmail covers.

I have been aware of TAT for some time but looked into it seriously only in the last few months. I was happy to see your site.

Something you may not be aware of is that covers from Columbus come in more than two colors. I have the round Columbus cachet in four different colors; green, purple, blue, and red. The three-line inaugural cachet comes in at least two colors; green and blue. I don't know how many combinations may be out there. If you hear of any,I'd like to know.

It sometimes appears that Maddux was part of the inital service but it was not. The train/plane service began in July,1929 but the TAT/Maddux merger was in November,1929.

If and when I learn more about this service, I'll pass it along.

In the early days of the development of airmail service in the US, the inauguration of a new air mail route was a big deal, often accompanied by ceremonies and souvenirs. Both the postal service and the airlines aided collectors by providing special service for First Flight Covers. The dates of first flights on new routes were published. One could submit a cover, marked to show the flight one wanted it carried on, and addressed to General Delivery at the flight terminus, with a return address on the back, and a note "Return to Sender". In the earliest days airline pilots signed such covers. The post office applied appropriate handstamps and/or cachets, and made sure the covers were placed on the proper flight; at the receiving end such covers were back-stamped to prove they had actually travelled on the designated flight. Finally, the postal clerk on the receiving end would, as requested, return the cover, sometimes with a "Return to Sender" handstamp, but often without, preserving the integrity of the souvenir. Note that nothing like an RPO cancel existed, so the whole arrangement was somewhat a matter of faith. In later days one did not need to use the General Delivery method, the system was more like First Day Covers: one sent the cover to the city of orgination, addressed to oneself, and it was cacheted, flown, and forwarded from the flight terminus to the address on the envelope.

The cachets on some First Flight Covers show a train, so when I find those, I usually buy them.
Below are my favorites of these, with my comments. 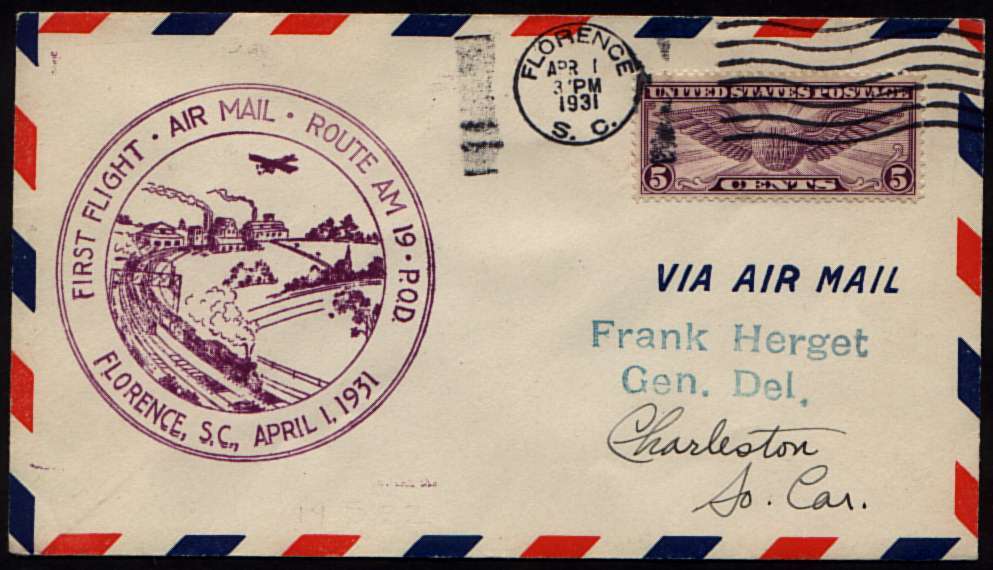 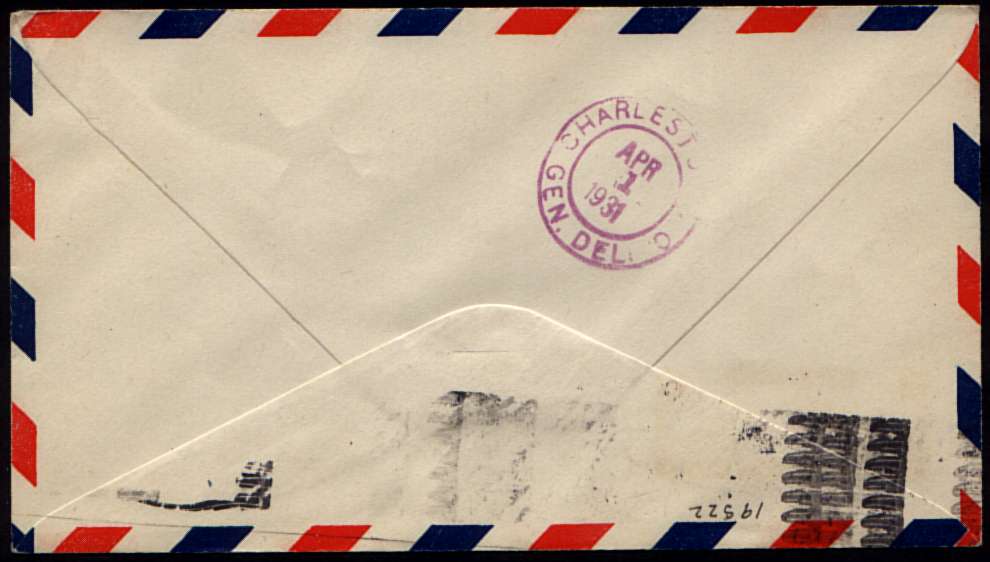 This is a relatively early one (4/1/1931), and has the requisite backstamp. There's no return address, so the sender must have picked it up. The distance between Florence and Charleston is only 100 miles, so he could have driven - or taken the train. The cachet shows a train just as a part of the scenery over which the plane is travelling.

"Dispatched by train to avoid delay" 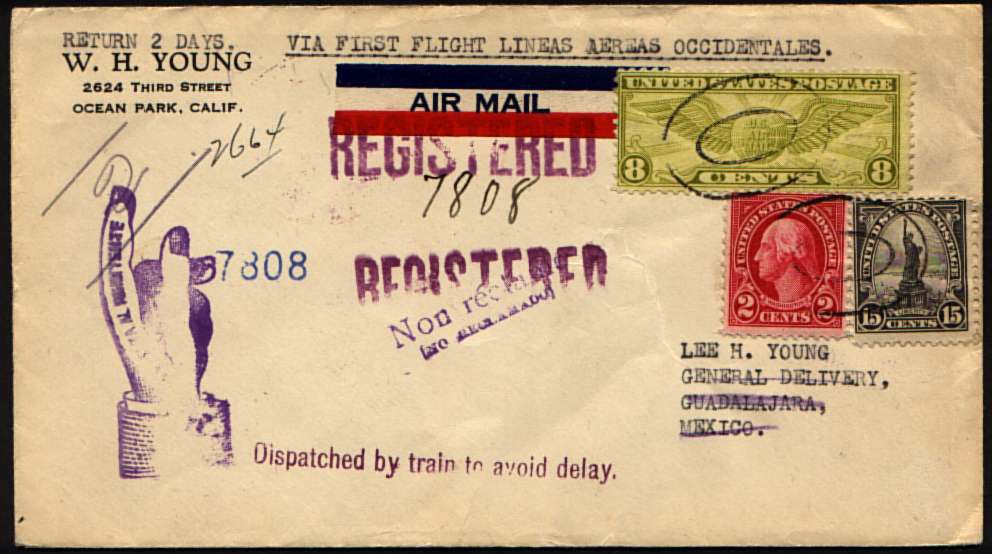 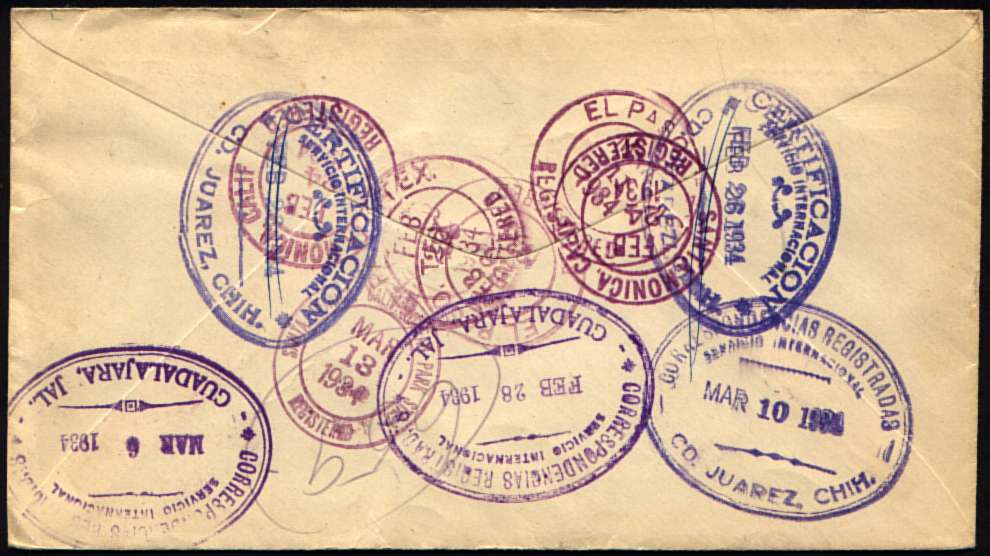 This is one of my favorites, from February 4, 1934. The sender went to a lot of trouble and expense to send the cover, and specified it should go on the flight named. Apparently there was some problem with the flight, so the helpful mail personnel routed the piece by train instead,
"to avoid delay"! 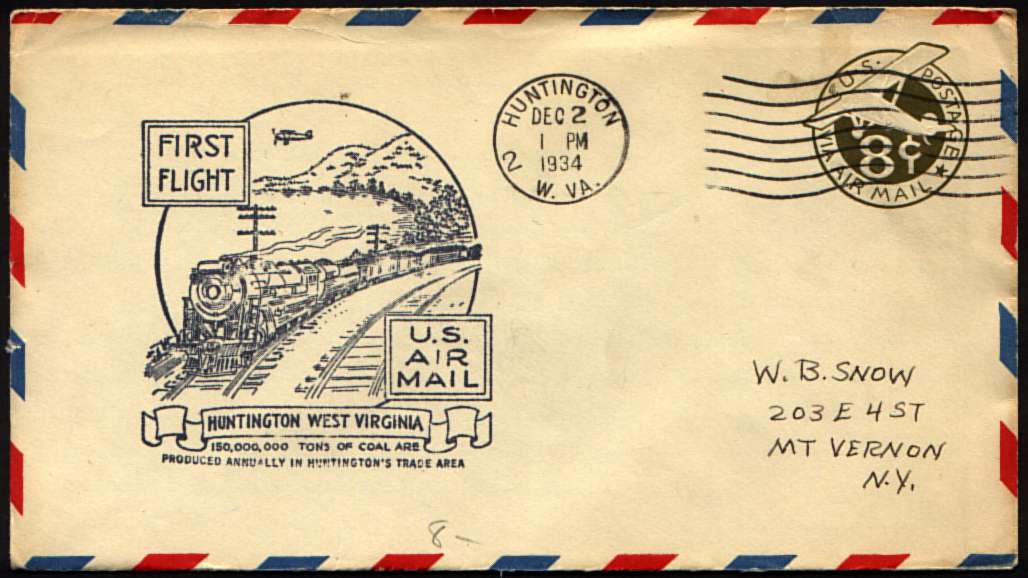 This cover is pretty standard. No backstamp. The train is obviously still far more important to Huntington than that tiny plane. It's December 2, 1934. 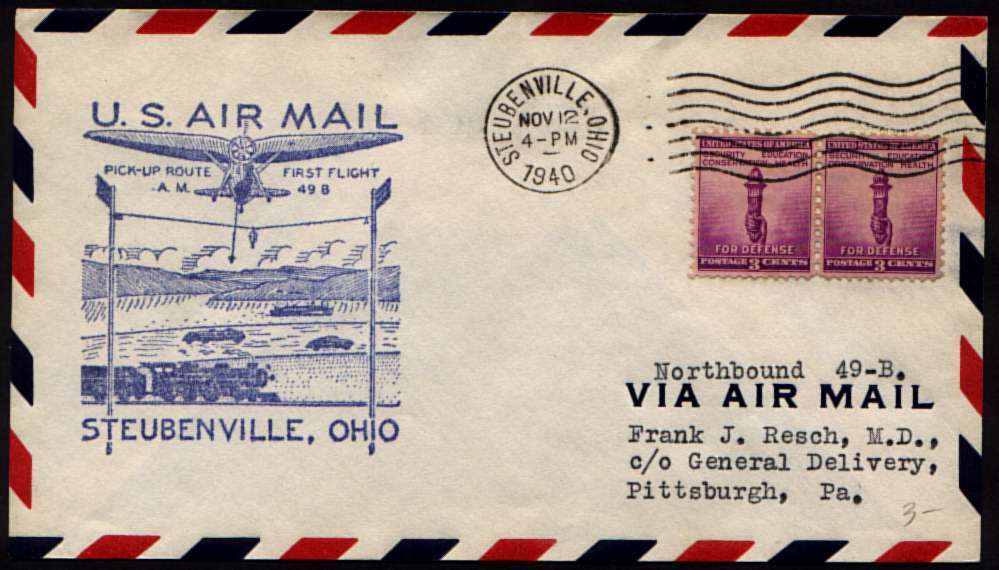 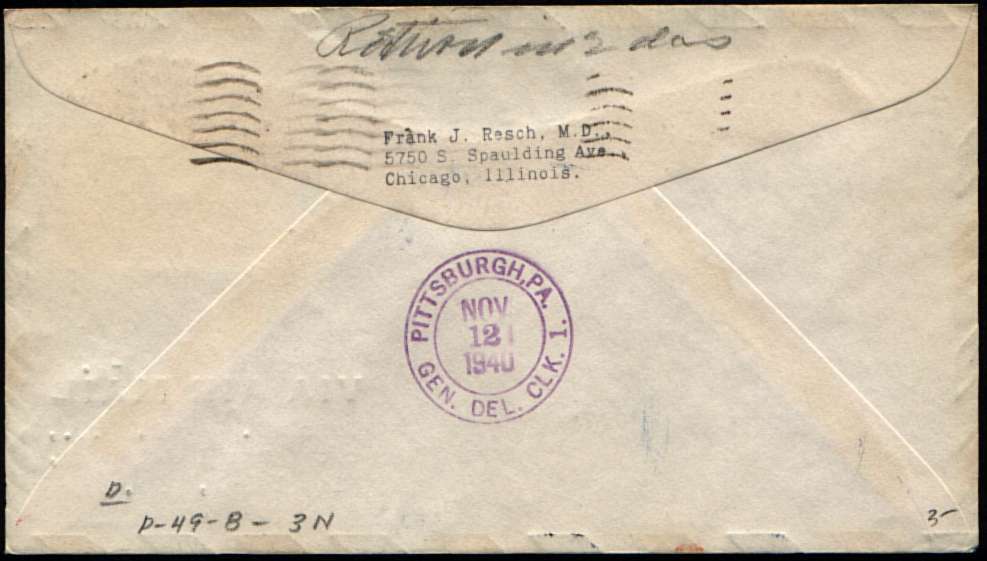 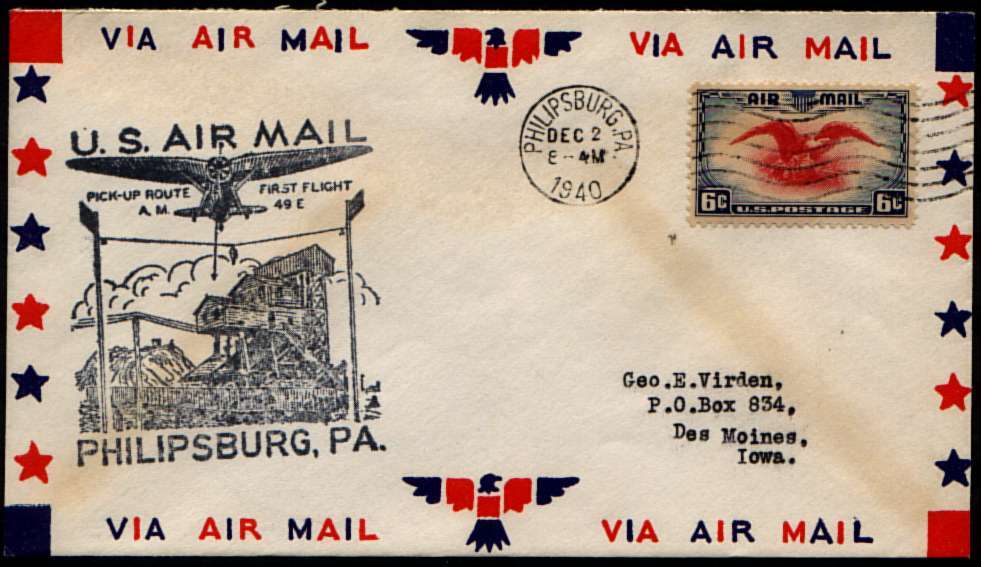 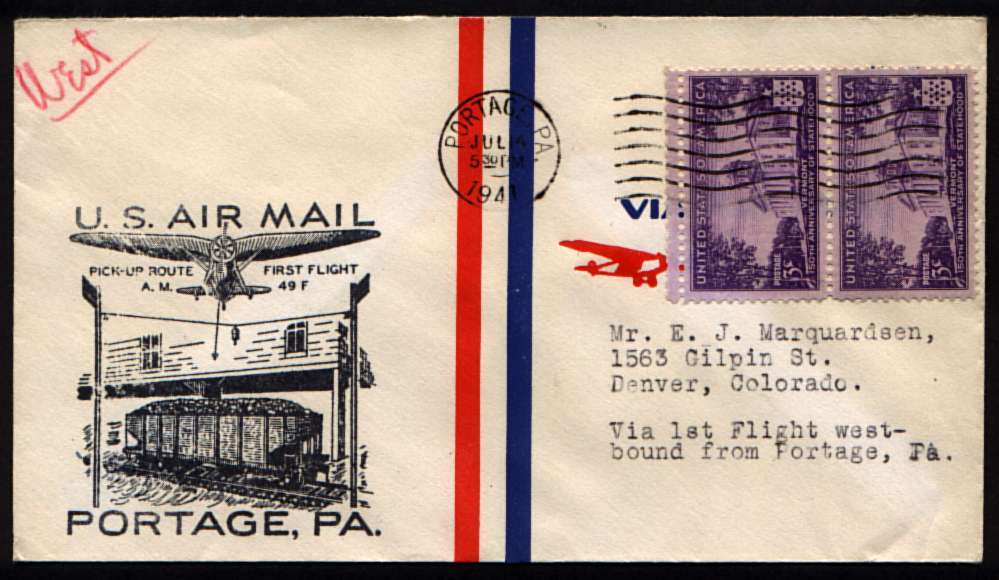 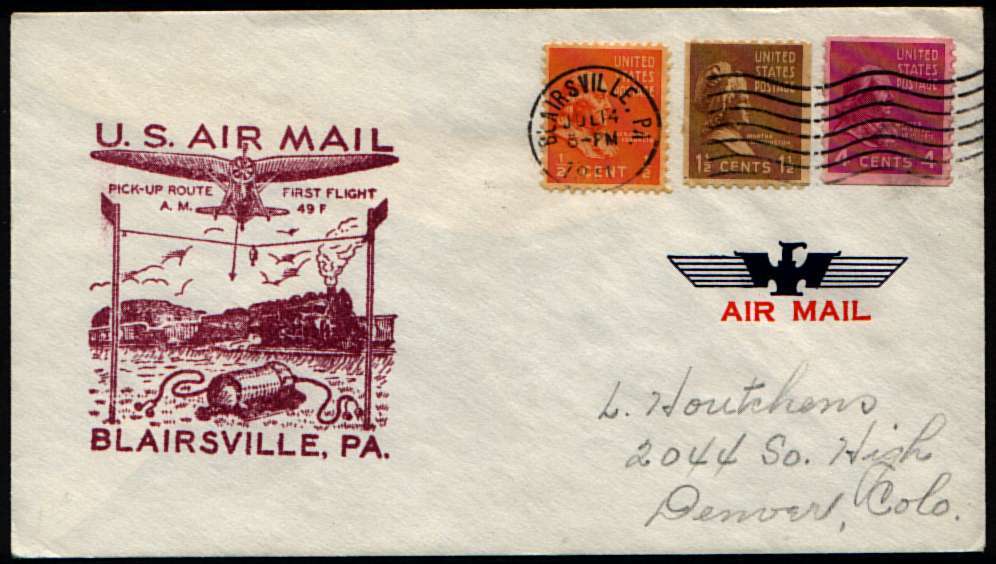 These four First Flight covers, two from 1940, and two from the same date and flight in 1941, all illustrate Skyhooking, or aerial pick-up, a scheme that was proposed as early as 1919, but did not become practical until 1939. Involving a mail bag suspended by a rope from a pair of towers, and a hook attached to the bottom of the plane, it was obviously inspired by the method moving trains had used for decades to grab mailbags. Unfortunately, it is a lot harder for a plane to execute the maneuver required, and misses and crashes were common, but it was used from 1939 to 1949, mainly in remote parts of West Virginia, Pennsylvania and Ohio. I have written more about this concept here.

Of the four covers above, three have no backstamps, so their provenance is shaky. There are no return addresses, and all are addressed to individuals, not General Delivery, so presumably the collectors sent them to the Postmasters to be serviced. The first cover shown (both sides) includes a backstamp proving it was received at Pittsburg, presumably the terminus of the flight, so it carries more weight. Still, who is to say they did not all travel by train? Note that the cachets of all four have exactly the same lettering, airplane, and posts, while the lower elements have been modified to represent the specific town of origin, so it would appear they were all produced by the same maker -was it the USPOD? Stay tuned. 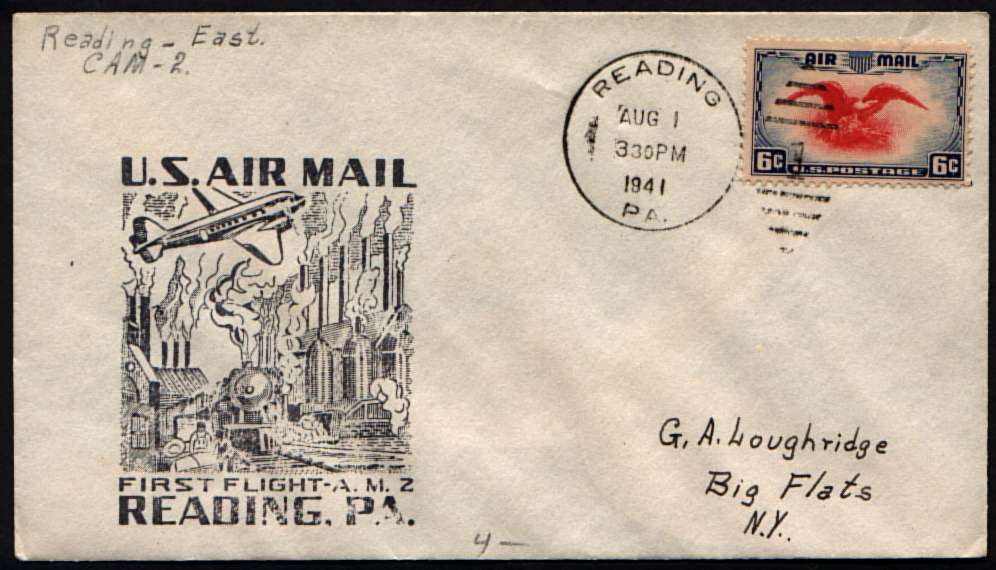 Here's another pretty ordinary one, but a nice train. The plane is far more dominant -it's 1941, and planes are becoming the dominant form of long-distance passenger travel. 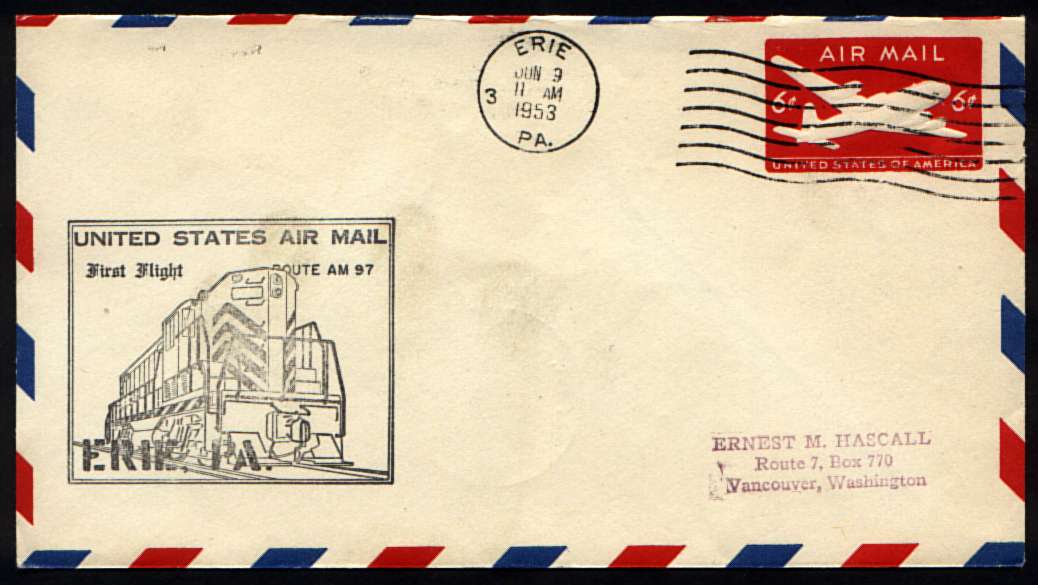 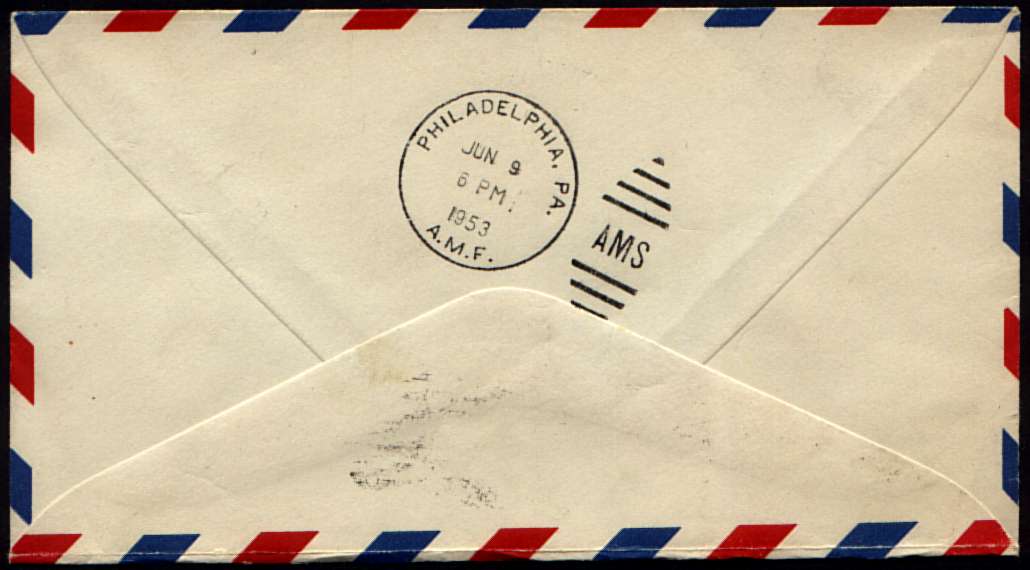 This one is the most convincing of all, with that "Philadelphia, PA -A.M.F. - AMS" backstamp. I assume AMS stands for Aerial Mail Service, or something like that, so is this just like an RPO cancel?

If you got to this page via the link on my Trains on Advertising Covers page, close this window to return to its parent.

If you got here some other way, please visit my page titled Trains on Advertising Covers.