Trains in Ukraine and Hungary

This has little to do with my philatelic alphabet, but I wanted to share these photos with an acquaintance in England, and decided a web page was the best vehicle. Once I had created it, I couldn't resist the temptation to make it available in the Alphabetilately pages as well. So no stamps below, just trains.

I took a trip with my Dad last fall, late September through early October, 1999, to the area in far western Ukraine where his father was born, near L'viv (also known as Lemberg and L'wow). I wanted to experience the trains there, so he bravely consented to book a tour that included a couple of train trips, one from Kyiv to L'viv, the other from L'viv to Budapest. Below are some photos and my commentary.

We started in Kyiv, where I ended up getting barely a day, since Hurricane Floyd delayed my departure three days. Dad very kindly hired a private guide to give me a private one- day Highlights of Kyiv tour, and it was great.

Kyiv was almost entirely destroyed during WW II, either by the invading German army, or by the Ukrainians themselves, to prevent the Germans from gaining anything. So all the historical sites are reconstructions, which seemed odd when I thought about it, but is common throughout Europe. Still I occasionally felt like I was in a theme park. 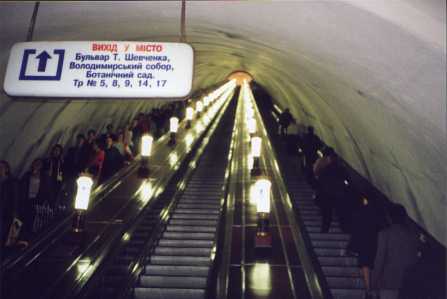 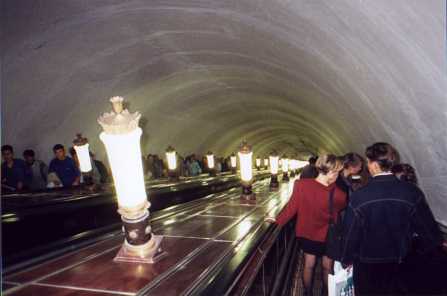 The subway lines in Kyiv are buried bizarrely deep - someone told me it is typical of all Soviet-built subways systems, something about bomb shelters. It took TWO breathtaking rides on the longest, fastest, steepest escalators I have ever seen to reach the tracks. 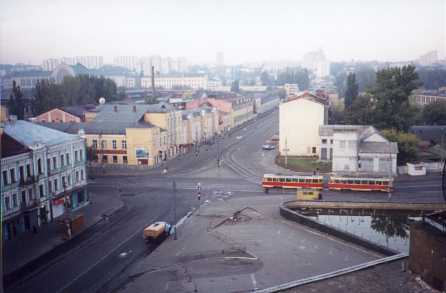 Lots of streetcars too - this was a view from the end of the corridor in the hotel.

Our train from Kyiv to L'viv left Kyiv's main train station at 8PM, so it was dark when we arrived there, and total chaos, and I couldn't get any photos. Ukrainians still use their trains heavily, so our train was crowded. Dad and I shared a compartment intended for six, and found it cramped for two. Below are a couple of shots of the corridor and one of our compartment. That white contraption is the boiler where our car's attendant (one of the few service personnel we encountered there who seemed to get the idea) heated the water for our tea, which was strong and sweet and welcome.

The trip was a joy for me, but I don't think anyone else in our group shared my enthusiasm. We arrived in L'viv early the next morning, barely after dawn, and again it was not feasible to play photographer, so I returned to the L'viv train station alone a few days later to take the pictures below. 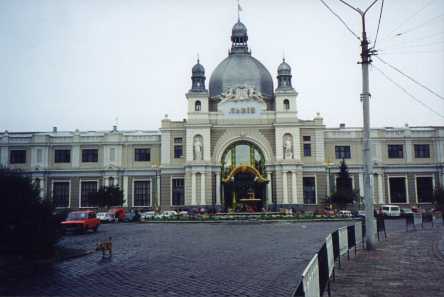 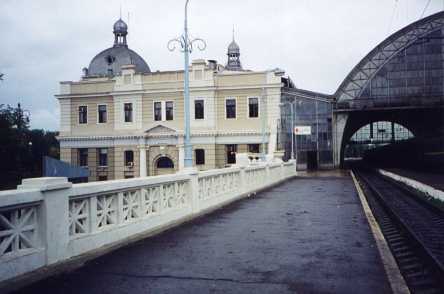 I was unable to find any information about the station in my own reference books, but emailed a (no longer active) Lviv information site and a gentleman named Rob Jordan provided the following data:

On March, 26, 1904 Lviv Railway station "Ploshcha Dvirtseva" was built by the Polish architect W. Sadlowski. It has been said that it was the largest railway station of it's time (however I could find no sources to confirm this). The construction of the station was during Austrian Hungarian occupation. During the second World War the railway station was destroyed and rebuilt in postwar time under the Soviet occupation, probably utilizing the original design as a guide

Below is a postcard showing the station as it appeared shortly after it was built. (Scan courtesy of Tony Goodbody of the UK, for whom I wrote this page.) and a recent screenshot from Google streetview from about the same angle - they did a pretty good job of reproducing the original, I'd say. 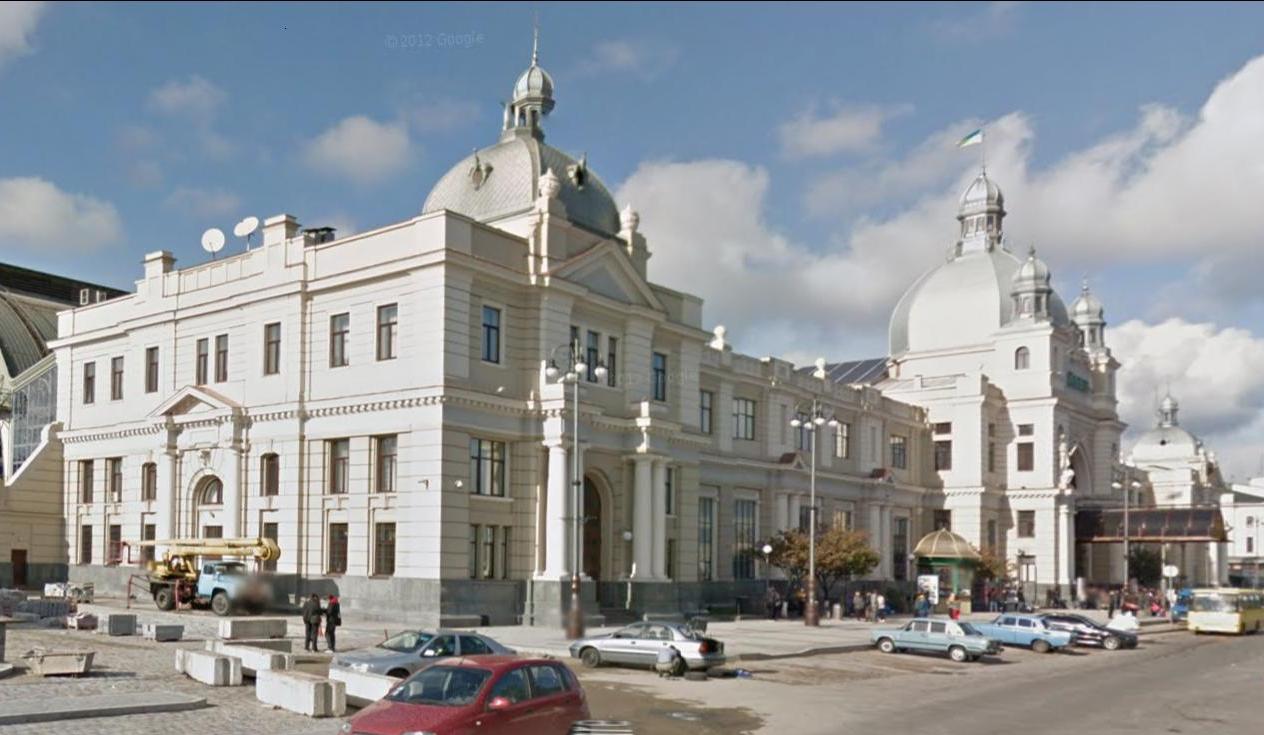 I asked my Dad what "Ploshcha Dvirtseva" means, and he replied

Dvirtseva is derived from dvir. Dvir means court, manor house or royal palace. Dvirtseva is an adjective derived therefrom. So Ploshcha Dvirtseva means public gathering place or something more indicative of that building at that time, or whatever the administrative officials had in mind when they decided on the appellation.

6/28/15 - I just tried Google Translate - it says Площа Двірцева means "Palace Square."
I asked Google Ukraine, and it says that name applies to the area in front of the station, and the station itself is Palace Station, or just Lviv Main.

They are actually expanding the station! You can see the area under construction, on the far left here. (Keep in mind that I am from the US, where trains are considered dinosaurs or oddities. We do not expand our train stations, we turn them into shopping malls.) 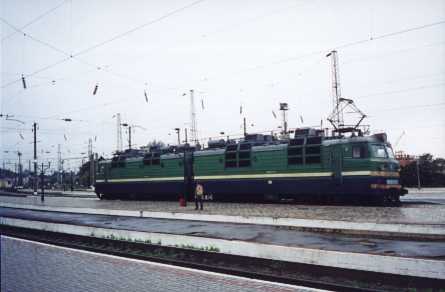 One of the more modern-looking engines I saw.

Unlike Kyiv, L'viv was almost untouched by the War, so has wonderful antiquities, though their state of preservation often leaves something to be desired. Parts of the old city got a facelift last summer for a meeting of European ministers held there, but otherwise everything seemed shabby. 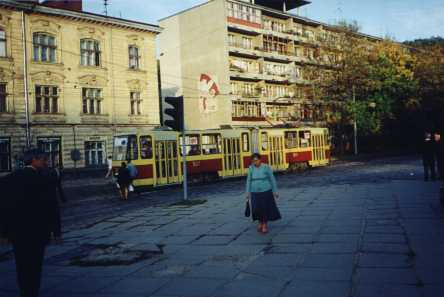 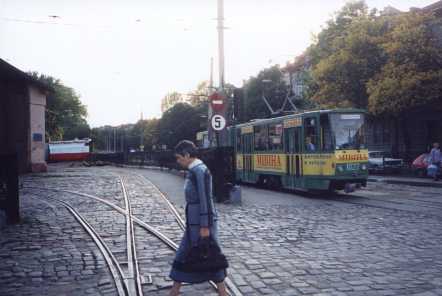 I insisted on riding the local streetcars, which mystified our guides. 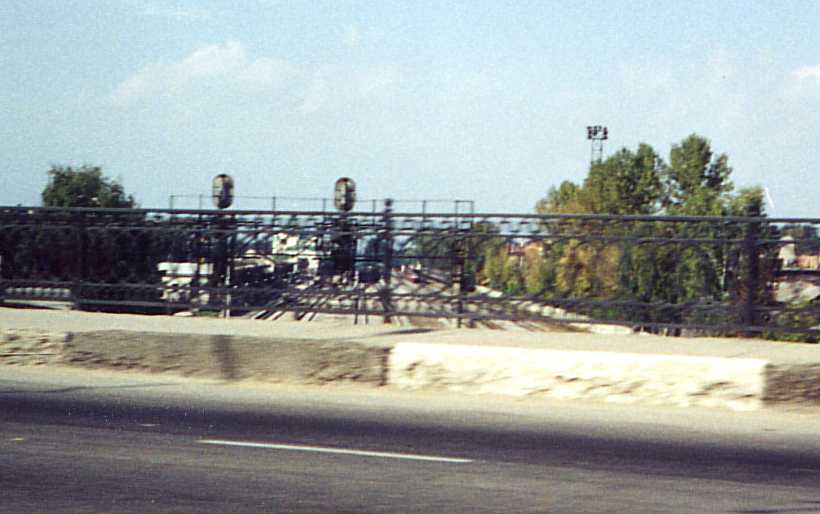 On a side trip south of L'viv by auto, to visit a Hutsul crafts bazaar, we passed through Ivano-Frankivs'k, where I managed to get this fleeting glimpse of the train station. It was the name Ivano-Frankivs'k that initially prompted me to suggest this part of the trip - it sounded quaint and charming. It turned out to be a large industrial town with little charm, though reconstruction of the city center is under way, and can only improve things. Fortunately we were headed further south, to Kolomiya, which was everything I had hoped for. 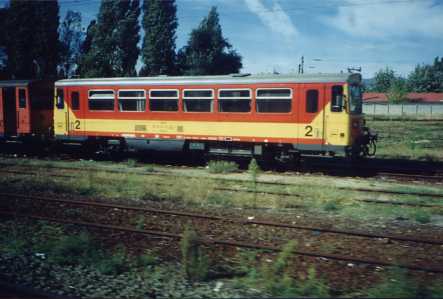 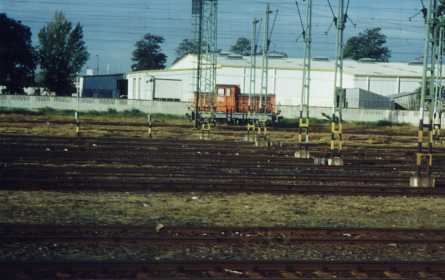 Our trip to Budapest was also an overnight journey, but did extend until noon the following day, so I got a few photos of Hungarian engines, for whatever that's worth. The highlight of the journey was our 4AM to 7AM border crossing and wheel change. They actually jack up the car bodies, roll out the wide-gauge Soviet wheels and roll in the narrower gauge Western European wheels.

We were detoured from our intended arrival at Nyugati (Budapest West) station to this one, Keleti Palyaudvar, the East Station - something about repairs, not sure whether to the tracks or the station. It added about an hour to our trip, moving at about five miles an hour through the outskirts of Budapest, but our Hungarian tour guide Laszlo was on top of it, and met us as promised. 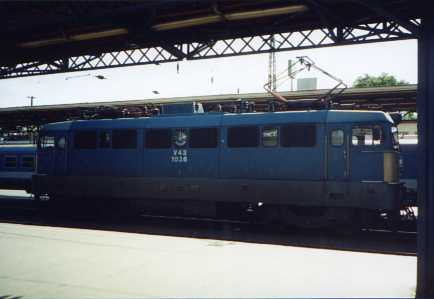 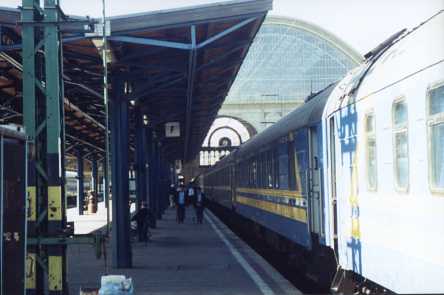 Of course I had to ride the Budapest Subway, with more of those incredible escalators. And people are still afraid of cameras - they either scowled or hid their faces when I started clicking. 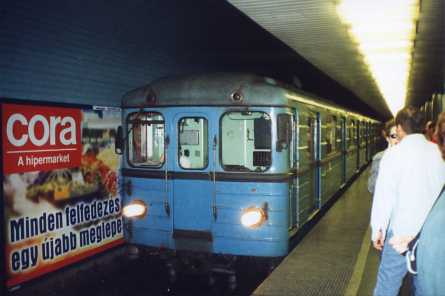