Click on any image to view an enlarged version.
Click on underlined text to view a separate page about that topic. 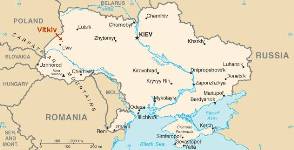 Map of Ukraine, with Vytkiv marked in red

My grandfather, Nicholas Senkus was born in 1876, in Vytkiv, a village in the western-most part of present-day Ukraine, about forty miles NNE of L'viv. At the time of his birth the area was part of Austria-Hungary. After WWI it became part of Poland, and in 1939 of the USSR. In 1991 it became part of independent Ukraine. The area has always been considered part of the Ukrainian ethnic homeland.

In 1965, during a period of relative friendliness between the US and USSR, my father, Murray Senkus (with my mother and sister) made his first trip to Ukraine, and met his relatives there. Sadly, his father's younger brother Ivan had died the year before. Travel within the USSR was still very restricted, so Dad was not allowed to visit his relatives in their villages. Instead, they visited him in his hotel in L'viv, though with lots of gestures to indicate that the room was probably bugged.

(That is not the full picture, of course.)

Dad returned briefly alone in 1970, and reconnected with Vladimir and his wife Ludmilla.

Dad was unable to make a third trip until 1992, after the disintegration of the USSR, and Ukrainian independence. By that time he was able to travel around freely, and visit his relatives in their homes.

1992 - Vladimir and his father, Stefan
Stefan is the son of Ivan Senkus, brother to Nicholas Senkus, so Stefan is my dad's first cousin.

Since that time Dad has visited his homeland at least once a year.

BACK TO TOP OF PAGE