The first cover below is the first advertising cover I ever bought, and the spark that kindled my interest in the area. I like it for its simplicity and effectiveness, as well as its all-over, two-sided design. The front has a somewhat "trompe-l'oeil" effect, and strikes me as rather modern for its time. Over the years since I have acquired six other examples, all with basically the same front design, but each with a map of the Eastern US on the back.

1/14/2007 - A descendant of Walter Longman, founder (with Aristides Martinez) of L&M Paint Co., contributed extensive biographical and genealogical data about the family. See bottom of page. Further such contributions are welcome, especially information about the fate of the company itself, which according to this page - http://www.ilab.org/db/book1816_36185.html - "...dominated the paint market in the United States from the 1890s through 1920. They were well known for their chromolithographic advertising pieces."

The text on the envelopes with a map implies there might be others for the other parts of the country, but I have yet to see any. [There were 45 states in 1899, with only Oklahoma (1907), New Mexico (1912), and Arizona (1912) of the contiguous 48 yet to be added, but the states east of the Mississippi accounted for 80% of the 76 million US population of the day.]

Once I got interested in the advertising covers, anything related to L&M was of interest, so I was pleased to find the cards below, which date from over a decade later, and are far less elaborate, but demonstrate that the brand was still being sold at the start of WWI. Note the proud statement that the paint contains lead! (Lead in paints was not outlawed nation-wide until 1978, though some areas passed laws forbidding its use as early as the 1950's.)

Another aspect of the company was its agents, two of whom created their own advertising covers. Or did they use a format supplied by the main office? These span the years 1894 to 1918, expanding the company's life to post-WWI.

The drab cover on the left is my most recent acquisition, a gift from Phil Neal of Harborside, ME, a visitor to this page. It is in a way my favorite, since I doubt I would notice it at all, were it not for its connection to the others. Note that the sender scratched out the word "Station" - did the town change its name from Leacock Station to just Leacock? Or was the name a misprint?

In tracking down the cards and covers above, I came across a few other advertising products of L&M. Below are a couple of poster stamps, an ink blotter, and a small notebook. The inside cover text of the notebook is entertaining. The numbers at the top of the inside front cover suggest to me this dates from 1923 (note similar numbers on the post cards above). 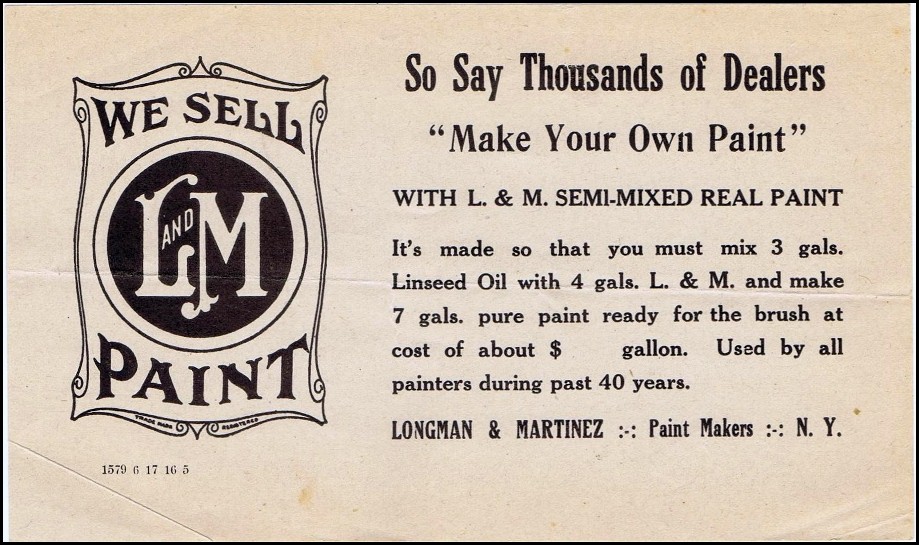 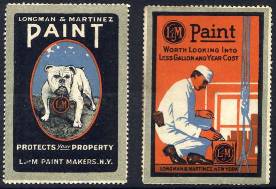 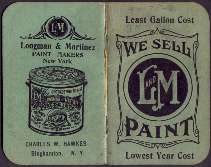 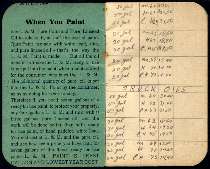 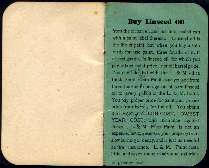 12/1/2018 - A visitor to my site sent me the two images below of a vintage postcard with an ad for L&M.
His interest was the ballpark, but he got curious about the ad, and found this page. He thinks the card dates from "about 1915." 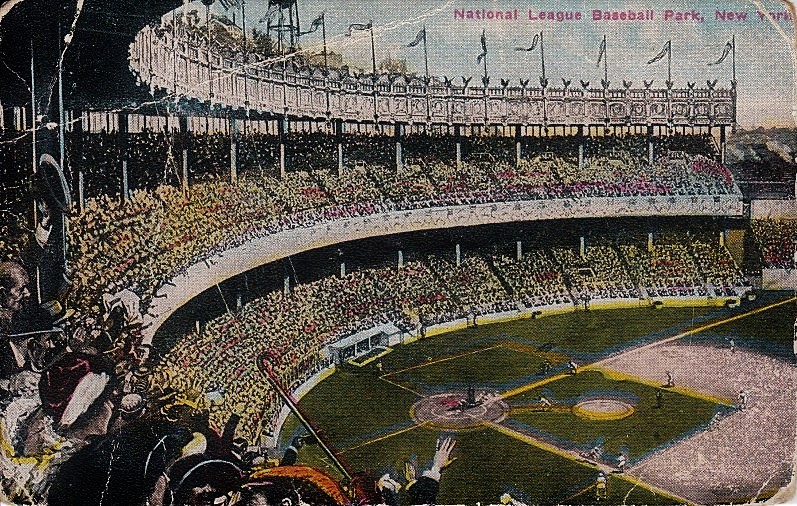 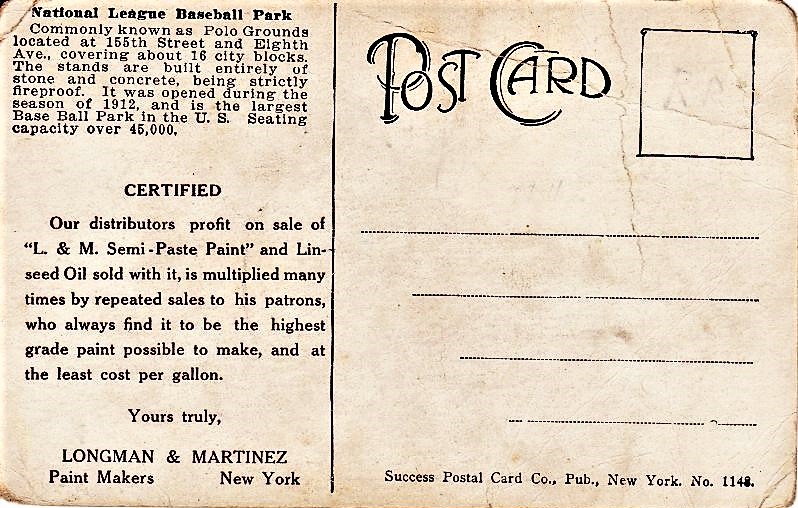 So what happened to Longman and Martinez Paints?
They seem to have been a dominant name in the business for at least thirty years.
Did they merge with some other company?
Please write me if you can provide further information about their history.

1/14/2007 - A descendant of Walter Longman, founder (with Aristides Martinez) of L&M Paint Co., contributed the following:

I came across your website on the Longman & Martinez Paint Company advertising covers this evening as I was searching for more information on this paint company. My interest is genealogy and the Longman family (related to mine). I discovered today that this company was owned by and employed many male members of the Longman family of Brooklyn, NY for several generations.

It was founded by Walter Longman , born 3 October 1843 in Brooklyn to Samuel and Bridget Longman. Samuel's family were gold refiners in Brooklyn and perhaps on Long Island. Walter married Leah Cammeyer Tremper, born in 1843 or 1844 in New York City. They had 5 children. More on that later. In 1870 Walter called himself a "painter", but he owned real estate worth $7,000 and had $1,000 in personal property - a lot of wealth in 1870. By 1880 he wasa paints and oil dealer... so the paint factory must have been functioning.

Walter's obit in the New York Times of February 27, 1930 says he was a Civil War veteran and founder of the Longman & Martinez paint manufacturing firm in Brooklyn. He died on February 25, 1930 at his home in Brooklyn. The paint company was located at North Tenth and Roebling streets in Brooklyn. Co-owner with Walter Longman was Aristides Martinez. In 1902 the Brooklyn Eagle says they bought land in the 14th Ward of Brooklyn (lots 13 and 14, block 87) from a Lucy E. Stoddard. This may have been when the City of New York (of which B'lyn was a part) was re-locating Roebling St.,requiring the paint company had to move. But as far as I know, it was always located in Brooklyn somewhere.

Sons Walter and Samuel Tremper Longman gave their occupations in the U.S. Census as manufacturers of paint, for several decades. Son Royale was a "clerk" in paints and then the credit manager for the paint mfg company.

Grandsons Robert M.(1890) and Walter (1898) both worked for the company, one as a salesman and the other as a manufacturer, perhaps taking over for their father, in 1930 after his death.

Walter Longman's wife, Leah Tremper, had a brother - (Michael) Hermance Tremper - who also lived in Brooklyn who was an engraver and inventor... lots of stuff about him in the Brooklyn Eagle available via the Brooklyn Public Library website. He may have been the person who designed the advertising covers, or at least the return address designs on the Longman and Martinez Paint Co. envelopes protrayed on your website.

Later, her husband added the following:

Thank you for posting your highly interesting pictures of L & M envelopes! We stumbled on to that web page because we are interested in the company - Walter Longman (1843-1930) was the founder around 1875 of the Longman and (Aristides) Martinez paint manufacturing firm in Brooklyn. He fell and broke his hip 2 months prior to his death, and then was in poor health until he died, according to his NY Times obituary (27 Feb 1930, p. 18). He married a Leah Cammeyer Tremper, and our "hobby" for about 30 years is the entire Tremper family in the US. They are basically a Hudson River family, but of course spread out from there, including to NYC and Brooklyn and the rest of the U.S. The Longman family has produced some eminent scholars since then - a professor "Tremper Longman" in California, for one, still writing.

Your postings add a lot of fun to the often rather dry business of researching the family, which for us is mostly tracking them in federal censuses. The occupation listings there are just mere hints, for many of them, of their interesting lives and occupations. We have not tried learning much about L & M - your posting may start us off in that direction! We, too, wonder how the firm's life ended and why and how that fitted in with other historical changes. Brooklyn was certainly a lively place in its heyday, and very sensitive to outside changes such as the world wars. I suppose there is someone somewhere who knows all about L&M - but who?

Here's a photo of the Longman & Martinez paint factory in Brooklyn, Building #26 in a municipal art society group document - they are trying to save some old buildings in Brooklyn.  The document is dated 2005, but does not say when the picture was taken - looks like 2005, in rather poor shape!  There are >100 buildings pictured, 264 they want to save!

Image from that document, of L&M factory at 28 Roebling Street, Brooklyn. Built 1910. 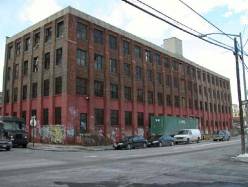 Many thanks to the Leiths. If you can assist their research on the Longman family, or add to the history of L&M Paint Co., please write me -

Good afternoon. My name is Michael Filler and I am the project manager working on the conversion of the old L&M paint company factory located at 28 - 46 Roebling St. in Williamsburg Brooklyn; from industrial to residential.

As I write this email to you now, I am standing on the fourth and uppermost floor of the building which spans 200 linear feet along Roebling Street, 55 feet along N. 10th St., and 54 feet along N. 9th St.

I was researching the building to determine the age of the structure when I came across your post. We are currently in the process of converting the structure into 59 luxury residential units averaging 925 ft.² apiece. The separate addresses have been combined and you can now travel through the structure from one half to the other, as we have opened up at the center shear wall.

We are adding a fifth floor to the building, and of course all of today's modern conveniences. This project is unique because we are keeping all of the timber columns and girders exposed, as well as all of the exterior masonry wall. It will be a very cool industrial feel, but may be a bit chilly.

Because the building was constructed in 1910, and less than 50% is being altered, the governing code guiding construction is the 1968 building code (New York City has since gone through the 2008 code, and now new construction must comply with the 2014 code).

Currently, the building has been stripped down to its shell and supporting members, and we have demolished and removed the existing concrete slab in the basement with the intent of lowering the cellar floor by approximately 18 inches to gain head height for commercial use.

Due to the historical use of the building, all of the soil below the structure is highly contaminated. We are working with the local environmental jurisdiction; The New York City Department of Environmental Protection Office Of Environmental Remediation (NYC DEP OER), to have all of the soil below the existing cellar slab removed and disposed of properly. An intricate system of grids has been determined, and based on the analytical soil results, an appropriate disposal facility has been selected. As you can imagine, we have extremely high levels of heavy metals; lead, mercury, etc. which necessitate careful removal.

We are using as many of the existing timber columns and girders and cast iron pieces as possible when opening up double height floors, but the additional floor and roof on top of the structure will be steel.

Should I uncover anything interesting during the next 14 months of construction, I will reach out to let you know.

Please see a couple of photos below how things look on the inside.

Below is a rendering of how the remodeled building will look. 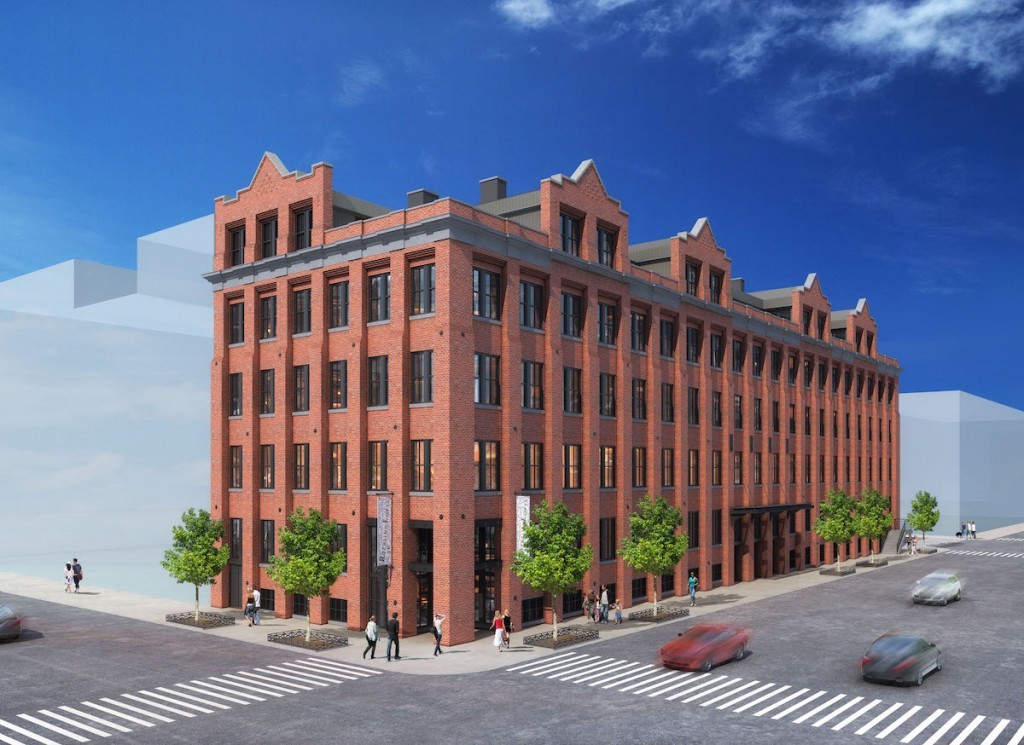 That image is from THIS PAGE

If you got here some other way, please visit my page titled A is for Advertising Covers.