Persian Rugs is the nickname given to the high value stamps in a series of documentary revenue stamps (tax stamps) issued in 1871. They are probably the most elaborate and colorful, and to many the most beautiful, US stamps ever produced. Their large size and intricate, colorful designs are more like currency than stamps, even for the time of their issue. The $200 and $500 values are called the small and large Persian Rugs. Rare and much sought-after, a matched set of these astonishing stamps in sound used condition costs about $17,000 on today's market (you won't want to walk on them). The unissued $5000 value is even more spectacular, though available only in proof form.

These stamps belong to the so-called "Second Issue" US Revenue stamps. The First Issue stamps were created in 1862 as part of the system of new taxes instituted to help finance the northern side of the Civil War, and continued for a few years after. The First Issue stamps were counterfeited widely enough that the IRS ordered the second series produced with security measures incorporated to prevent further such fraud (cf. today's problems with currency, and the recent series of revisions to the design and production of U.S. bills). Accordingly these stamps used special papers with colored threads embedded, special inks in several colors, and designs so complex and intricate that forging them would have been virtually impossible at the time.

It is worth noting that taxation was still a dirty word in the U.S. in the nineteenth century. The colonists had fought for "no taxation without representation" , which to many of them and their descendants meant no taxation, period. Excise taxes (i.e., taxes on commodities) were the sole Federal taxes for many years, with alcohol and tobacco being favorite targets, based mostly on moral judgments that most Americans supported. During wars there were temporary special taxes on property, additional excise taxes, customs duties, etc., but these were always repealed quickly when the war ended. During the Civil War, Congress imposed the first income taxes, as well as many special excise taxes, and taxes on most legal documents, all evidenced by the use of special stamps. The Persian Rugs are the high values of the documentary tax stamps, used to confirm payment of a tax of fifty cents per thousand dollars on property transfers.

The Civil War income tax was abolished in 1872, and from then until 1913, most of the Federal income derived from taxes on alcohol and tobacco. There was a short-lived attempt to revive income taxes in 1894, but it was ruled unconstitutional, and abandoned. Finally the need for a dependable, stable source of income for the Federal government led to the passing, in 1913, of the 16th Amendment to the Constitution , which authorized Congress to legislate income taxes (The Congress shall have power to lay and collect taxes on incomes, from whatever source derived, without apportionment among the several states, and without regard to any census or enumeration), and set us on the road we still travel today.

Click here to visit an excellent U.S. Treasury web page about the history of taxation in this country. 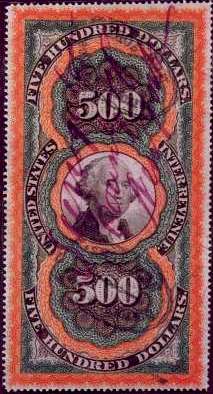 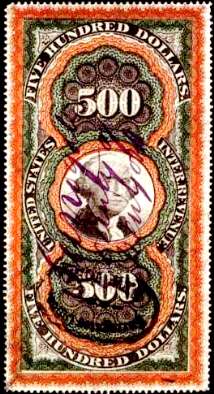 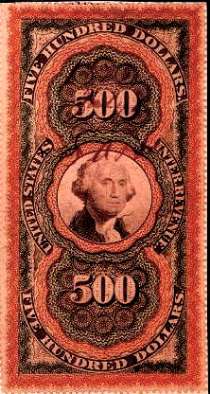 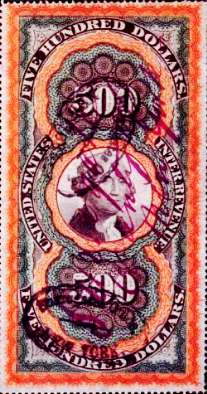 Some consider this stamp the real Persian Rug, and regard its smaller brother as just a poor relation. Others call this the Large and the $200 the Small Persian Rug. Whichever you prefer, there is no question this is the most ornate, breathtaking stamp ever issued by the US government, and even though it was a Revenue stamp, hence technically a Cinderella, no serious collector who takes the time to admire its beauty could help wanting to own one. These scans are all from photos (no, I don't own any Persian Rugs, either printed or woven), and as none of the literature I have consulted mentions different papers, I must assume the color variations shown here are the result of either flawed photographic reproduction techniques, or some effect of age and mishandling on one or more of the stamps. The stamp was supposedly printed on gray paper, in red, green, and black, so I suspect the ones on the two ends are the most accurate. The actual size of the engraved portion of these stamps is listed as 52x100mm, or about 2-1/8 x 4" - on my monitor (at 1152x864) these all display at approximately their actual size. According to the Kingsley book (see bottom of page) there were 400 copies of this stamp printed, of which 210 were issued, and 76 were known to survive in 1993. Their 1997 catalog value was $12,500 each.

Call it the Small Persian Rug , or the Poor Man's Persian Rug - According to the Kingsley book (see bottom of this page) there were 446 copies of this stamp issued and of those 121 were known to survive in 1993. The number printed may be as many as 1176, but Kingsley thinks this number is high (see p. 83).   The 1997 catalog value was $4,750. The actual size of the engraved portion of these stamps is listed as 37x69mm, or about 1-1/2 x 2-7/8". Again, these are scans from photographs, and I have never seen an actual example, so I have no idea whether these colors are true to the originals - the stamp was supposedly printed on gray paper, in red, blue, and black, so I suspect the one on the left is the closest to its source in appearance. 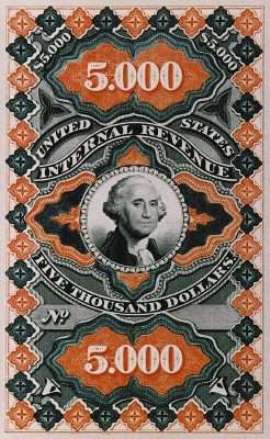 There was an even more spectacular stamp planned for this series, the $5,000 denomination shown in proof form above. Given the statistics quoted for the $20 and $500 denominations, one can see there was hardly sufficient justification even for those issues, let alone one that would have been needed only for property transfers of Ten Million Dollars or more, of which only a few are recorded for the time. Dimensions of this stamp were to be 70x116mm, or a whopping 2-3/4 x 4-5/8". There are twenty-five copies known (as of 1993), in various colors, ten of them in the Smithsonian Museum.

Oops - make that twenty-six copies - GO HERE to read about the latest discovery.

If you wish to learn more about the Persian Rugs, there is a wonderful book, The Legendary Persian Rug, by Thomas C. Kingsley, which is out of print, but should be available through one of the major philatelic literature dealers.

If you just want to learn more about Revenues, visit one of the Internet's most honored sites,
The Museum of United States Essays and Proofs