An RPO (Railway Post Office) was a special mail car on a train. Trains loom large in postal history, as may be deduced from the number of stamps on which trains are depicted - the ATA Handbook World Railways Philatelic lists over 10,000 of them, and the U.S. alone has issued at least 50. From the 1860's until the 1950's, most inter-city mail in the US moved by trains, and much of it was processed by hand, en route, in special RPO cars - the mail was not only transported by train, it was postmarked and sorted there as well. The system was called the Railway Mail Service, or RMS. During 1943, probably the peak of the RMS, there were 3,500 RPO cars in use, traveling a distance of over 486 million miles, and handling over twenty billion pieces of mail. Even in 1947 the railroads still carried ninety-two percent of all U.S. mail. But from the 1950's on, the RPO's died rapidly, replaced by buses, trucks, and planes. The last true RPO made it final trip on June 30, 1977.

The history of RPO's, as well as their postal markings (postmarks and cancels), is a popular collecting specialty among philatelists.

Starting in the 1940's, as Americans began to abandon the rails in favor of asphalt and concrete, Highway Post Offices (HPO's) came into use. These were buses, which collected and delivered mail, sorting it on the way to the next Post Office. They were used a relatively short time, the last being eliminated in the 1970's. The primary methods of transporting mail now are by trucks and planes, while most processing is done at large regional mail centers, and is highly automated.

Rest your mouse cursor over an image, and if it changes to a hand, clicking there will bring up a larger high-res version.

In the UK, the first RPO (called a TPO, for Travelling Post Office) was established in 1837 or 1838, and trains quickly became the primary means for moving mail there. Processing mail en route evolved soon after, and by the 1840's the TPO's were well established in a form that continues in the UK to the present, though even there, their days are numbered.

Here in the US, on the other hand, while mail was carried on trains almost from the beginning of our rail service, it was not until the Civil War, when the volume of mail increased dramatically, that the true RPO's - special, dedicated mail cars - came into use.

Most mail carried on trains in the pre-RPO era was cancelled, sorted and bagged before it was put on board, and bore no special markings to indicate how it was transported. Only mail actually received on the train itself received special handstamps. Such mailed-on-board railroad covers are distinguished by postmarks such as the ones shown below, which are some of my all-time favorite handstamps . 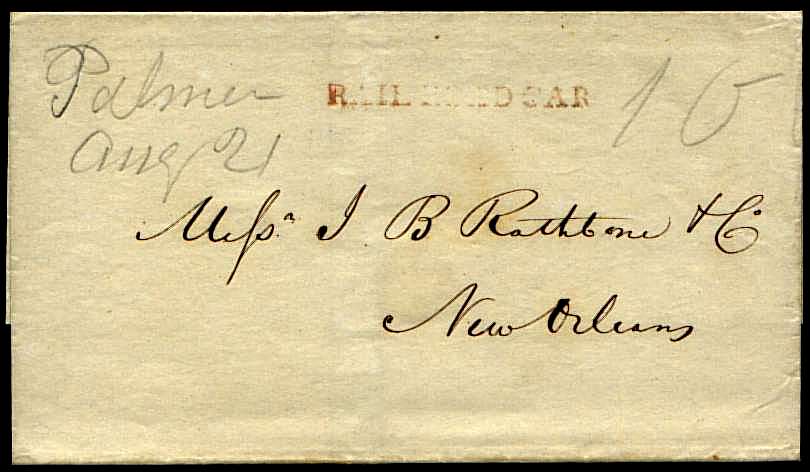 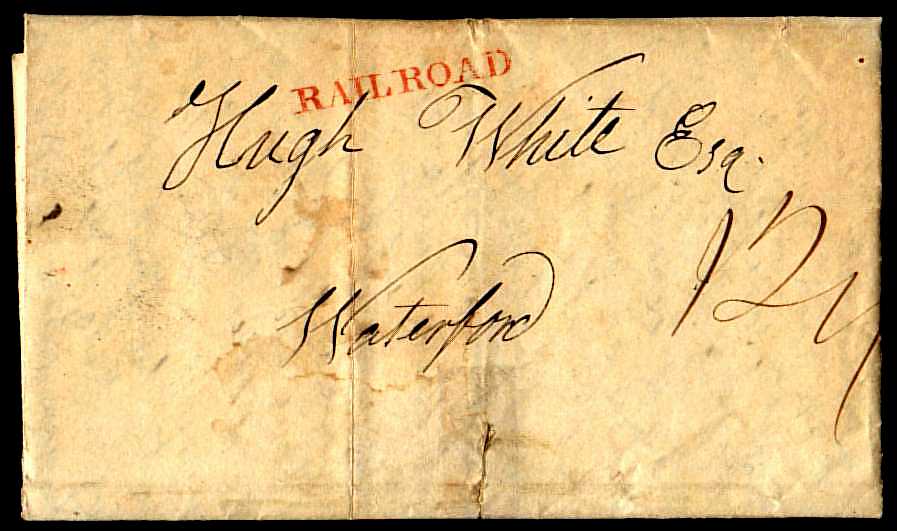 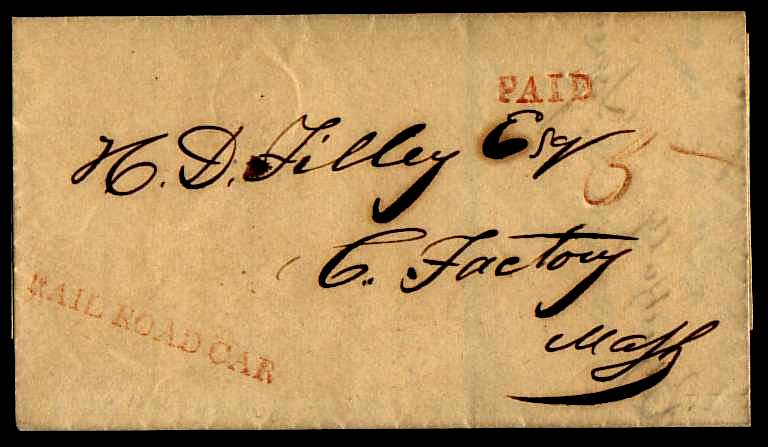 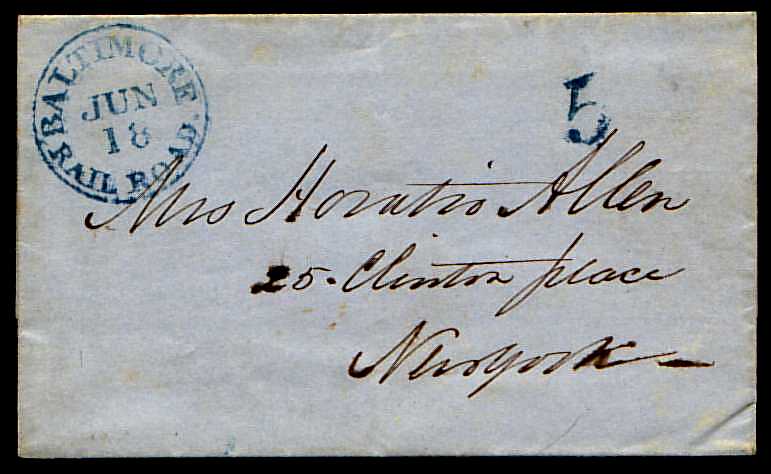 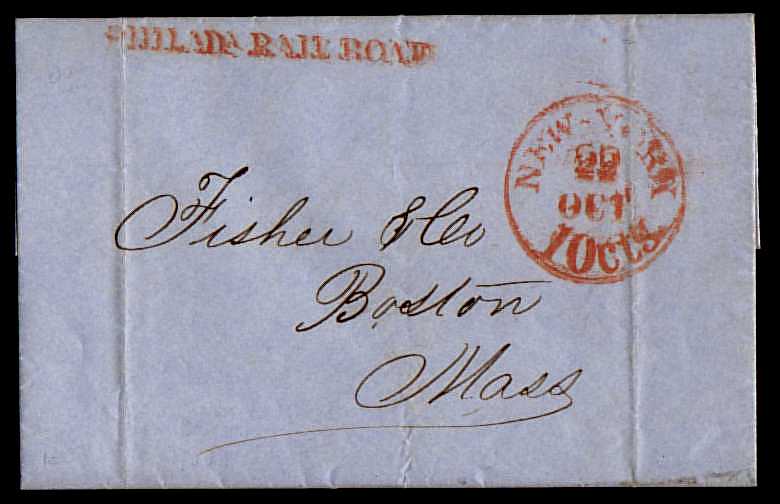 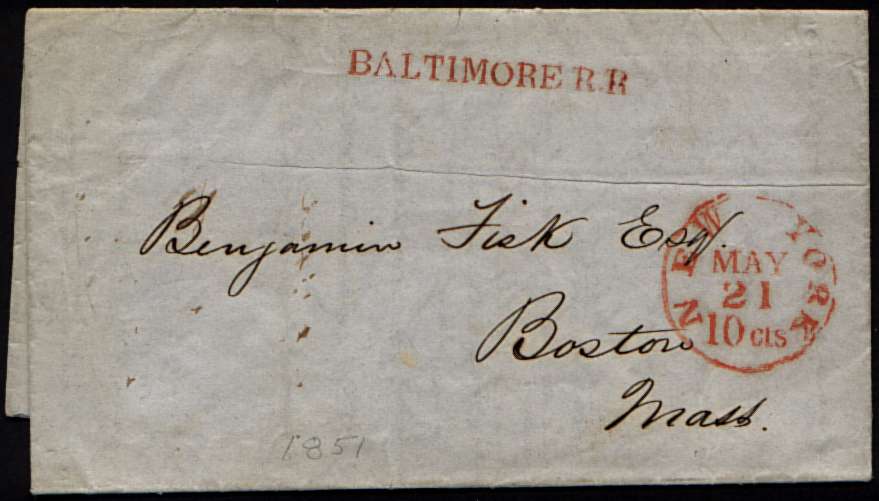 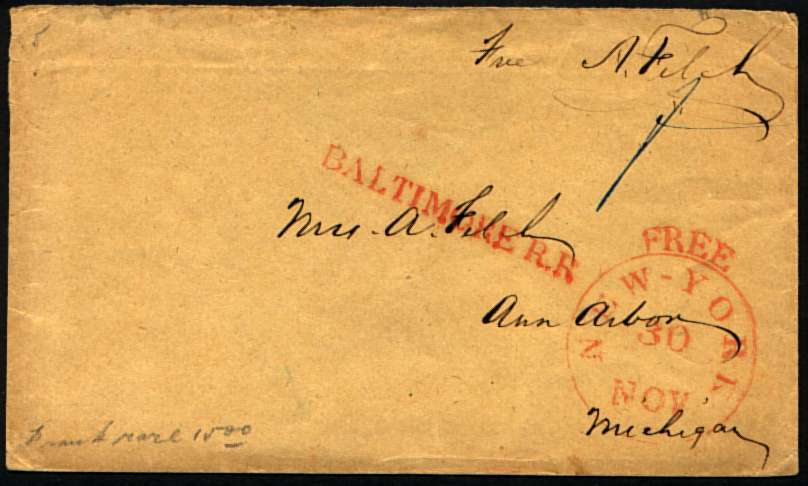 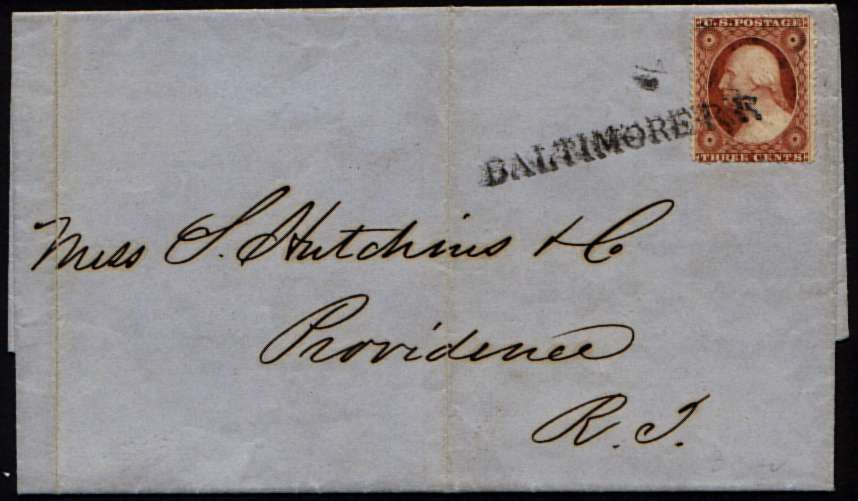 Pre-RPO railroad postal markings fall into several categories, based on the type of mark, one of which is Route Agents. Before the true RPO's, Route agents traveled on early trains to look after mail bags. They were allowed to accept mail on those trains, and applied postmarks and cancellations to such mail. All of the handstamps in the group of images above are agent markings. Early Agent markings are just the word RAILROAD or RAILROAD CAR, indicating that the letter had been accepted in transit. Some of these also have a marking such as PAID, or a date stamp. A little later, the name of the railroad was stamped on the letters. Still later markings, like the last one shown above, incorporate both the name of the railroad and a date stamp into one marking.

Since many agents were employees of the railroads, rather than the USPOD, we have little documentation of their activities, so much of what we 'know' has been deduced. What we DO know is that the USPOD contracted with railroads to transport the mail, and hired dedicated route agents where the volume justified it, or stipulated that railroad personnel should handle the route agent's duties on smaller lines.

The two "RAILROAD CAR" folded letters on the top in the group above are both dated 1845 inside. The BALTIMORE RAILROAD item on the bottom left, while there is no year date in the postmark, can be dated to the 1840's by its handstamps. The "RAILROAD" "fls" (folded letter sheet) at center top, from Chittenango, NY to Waterford, NY is dated inside, July 1840. And the Philadelphia Railroad cover at middle center is dated 1850 inside.

The cover at bottom left has an interesting added attraction, the word "Free" and a signature at top left, together with the word "FREE" in the handstamp. This tells us that the sender was either a Federal Government official (most likely a Congressman), or a Postmaster, and had the right to send his official mail free by marking it thus (a so-called "Free Frank"). The privilege dates back to the earliest days of this country, and has often been a source of controversy. This letter, for example, looks as though it was sent to the man's wife, and most likely was not official mail, hence did not qualify. Click here to read a page about the history of the Franking Privilege in the U.S.

All of the markings on these covers were presumably applied on the train, and indicate that the mail was handed-in on the train as well (unlike RPO postmarks, which were also applied on the train, but on mail collected from stops along the way, which would have been posted in ordinary collection boxes). While not plentiful, covers like these can be purchased for $20 to $50 apiece from Postal History dealers, though some can be more expensive, depending on the scarcity and quality of the markings, and the destination. 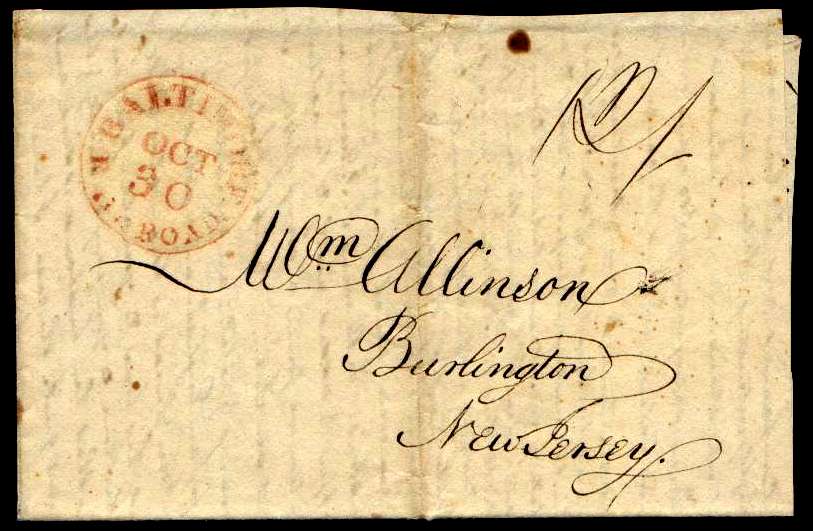 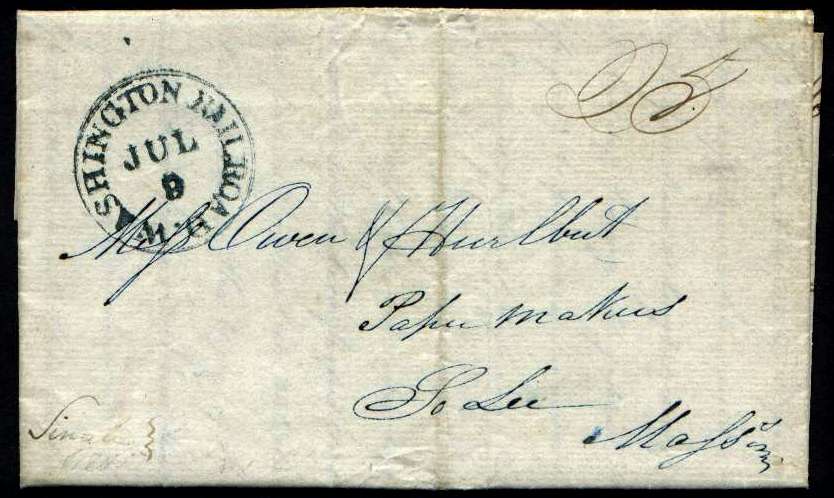 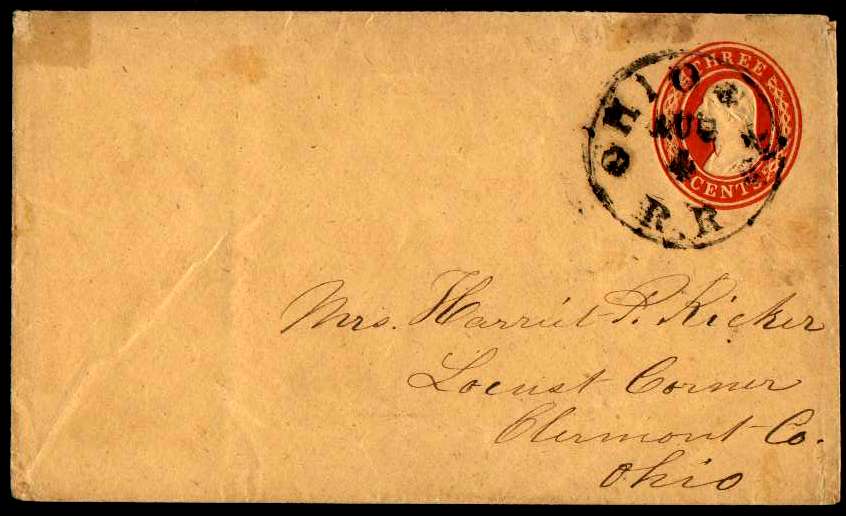 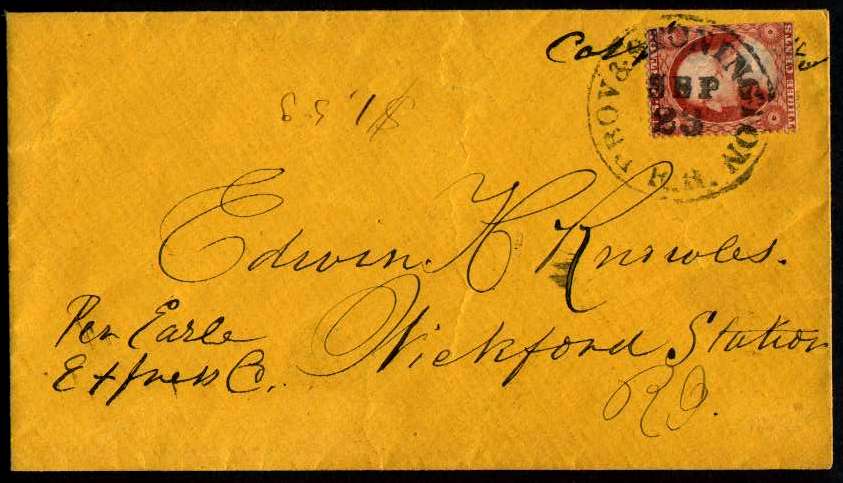 Above are a few more Route Agent covers dating from 1839 through 1860. Rest your mouse arrow over any of them for a pop-up box with technical data about it. Click on any image to view an enlarged version. Most have a notation of the form "Towle nnn-x- n". The Bible on agent markings is a book published by the Mobile Post Office Society in 1986, U.S. ROUTE AND STATION AGENT POSTMARKS, by C.L. Towle. It illustrates and numbers all the markings, creating a simple, convenient way of identifying the markings on covers like these.

By the 1870's Route Agent responsibilities had developed somewhat, and many more of them were postal rather than railroad employees. Most of these later Route Agent markings include "AGT" in the handstamp. A representative sampling is shown below. Again, you may rest your mouse arrow over any of them for a pop-up box with technical data about it. Click on any image to view an enlarged version. 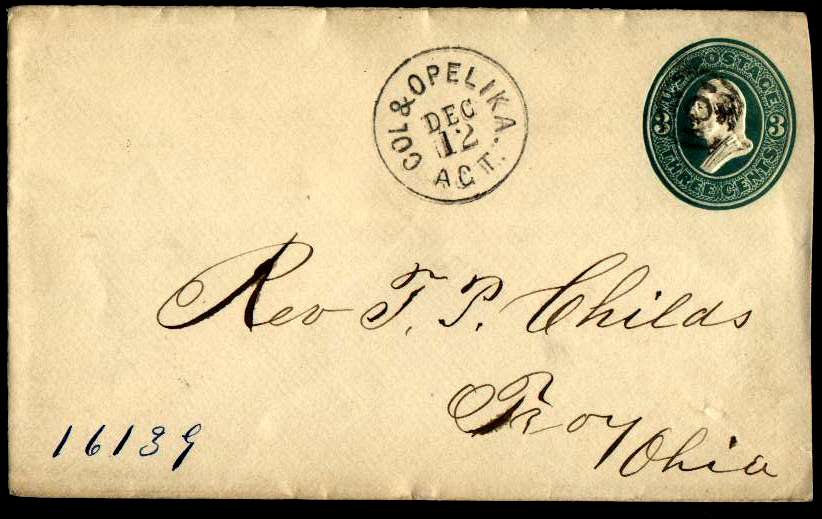 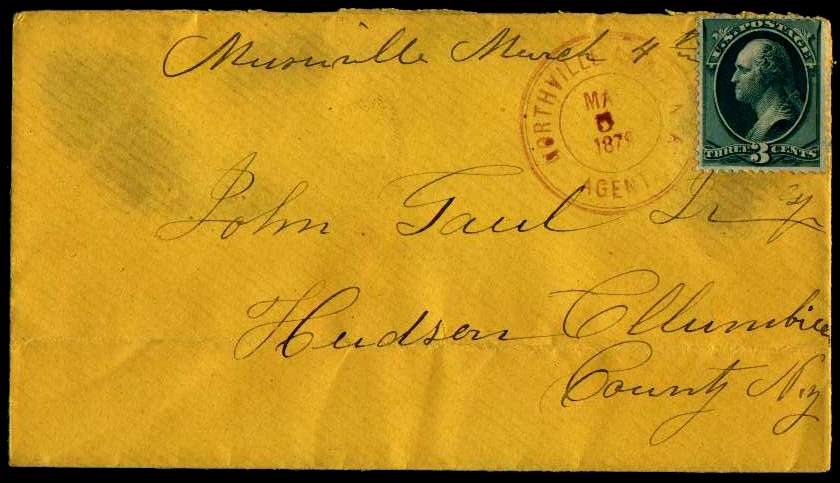 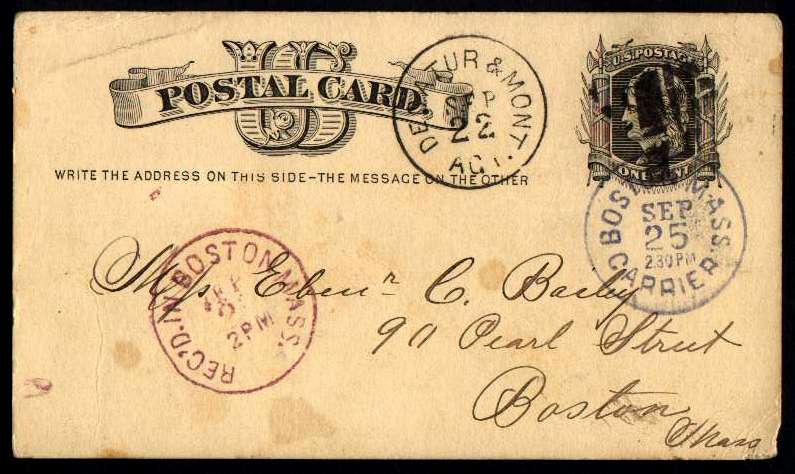 The marking on the second cover above is unusual in two ways - the triple circles, and "AGENT" rather than "AGT", but it is not particularly rare or valuable. I like the third cover (actually a postal card) because all its markings are on the front, and in addition to the receiving handstamp in Boston we have a Carrier's postmark. I had never seen one of these before, but knew about the earlier Carrier's of the 1850's, and wondered what the connection was, if any. I emailed Phil Bansner a dealer in US postal history and an expert on such matters, and he replied as follows:

This was not the carrier service that was used during the 1850s. This pmk just denotes that it was given to a carrier (mailman) for delivery. There was no extra charge during this time period. The origin of the card may be on the reverse. It was carried by railroad, rec'd in Boston at 2:00 PM and went to the carrier at 2:30 PM. The carrier pmk is #2253 in the Blake/Davis Boston postal markings book. 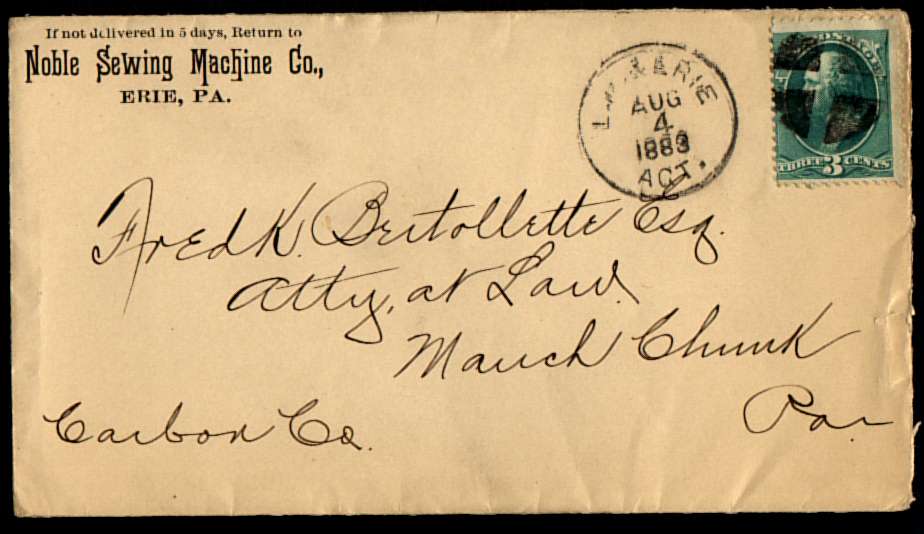 The last Route Agents were superceded by the formal establishment of the true RMS (Railway Mail Service), on July 1, 1882, but agent handstamps continued to be used for some time afterwards, so the marking above "L.H. & ERIE AGT - AUG 4 1883" (Lock Haven & Erie, Pennsylvania - Towle 198-D-1) is not unusual or scarce.

Station agents were railroad employees in charge of stations. Some were also postmasters of their local communities, a natural combination, since train stations were the hubs of most communities, and a natural place to collect and distribute mail. Station-agent markings are simply postmarks applied with a station agent's railroad ticket date-stamp/canceller. They were most likely not applied on a train, and bear the names of railroads only because the postmaster was not yet constrained by postal regulations from using whatever device was handy to cancel mail as he received it - later the USPOD made stricter rules. If covers with these markings went to a town other than the one where mailed, they probably did make the journey by train, though I suppose even that cannot be said for certain. 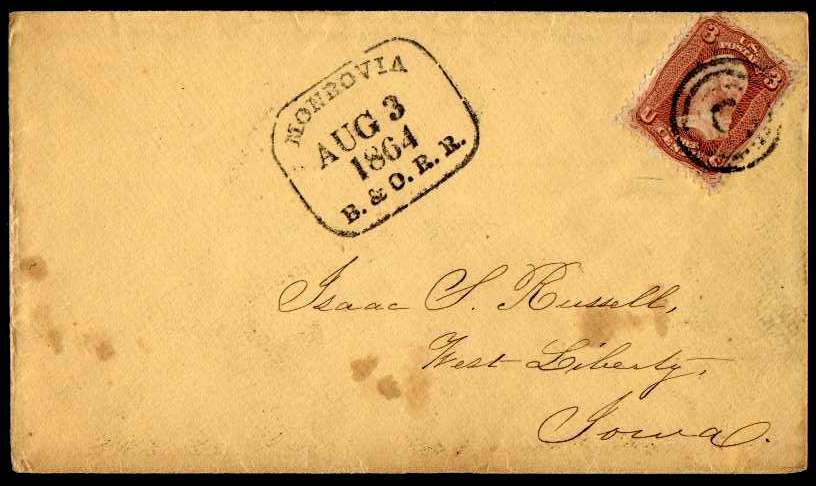 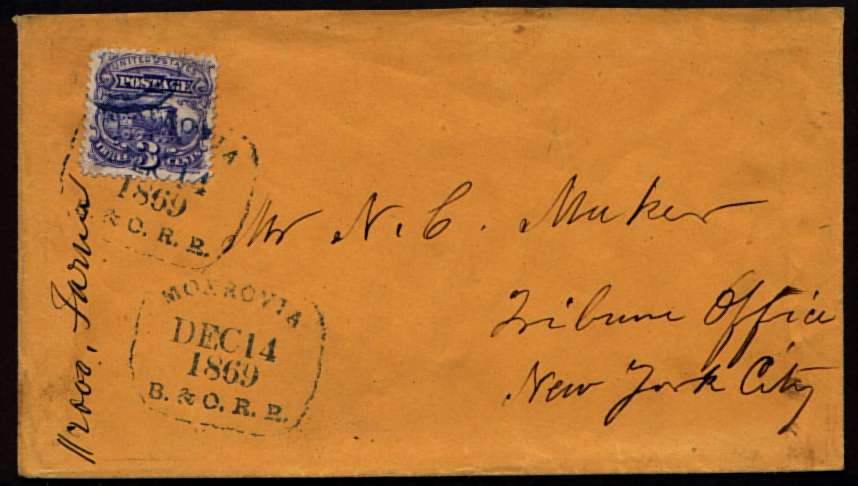 The two covers above have Station Agent datestamps (both are Towle 274-S-8). Both were sent from Monrovia, MD - one to to West Liberty, Iowa, a journey of about 1,000 miles, and the other to New York City, a distance of about 200 miles. I am sure both went by train.

U.S. EXPRESS MAIL markings can be found on covers from the Northeastern US between 1836 and 1860. These resulted initially from an effort by the USPOD to compete in the then-burgeoning business of providing faster mail delivery - for a high fee - via trains, boats, stages, or whatever mode of transport would do the job, so the markings do not necessarily identify mail carried on a train, though in many cases that was the case. Initially the USPOD competed against private express companies, but these private expresses were put out of business in the late 1840's by laws forbidding private companies to carry mail over routes belonging to the USPOD, so later versions of these postmarks seem to be little more than route markings, i.e. they did not indicate special services. The example below, NYC to Providence, RI, is a folded letter sheet dated Oct 18, 18?? on the inside (has to be 1851 or later by the stamp, could be 1854, but not clear). The US EXPRESS MAIL postmark on this item is illustrated in Elliot Perry's book "Pat's Paragraphs" (it's number 9, on page 296), and described there as one used on steamboat mail on the Hudson River between New York and Albany, which seems an odd route for mail to Providence, RI. Moreover, he says the postmark was discontinued in 1851, which casts further doubt on the "1854" date penciled on the front. Stay tuned for further info as I learn more about this subject. 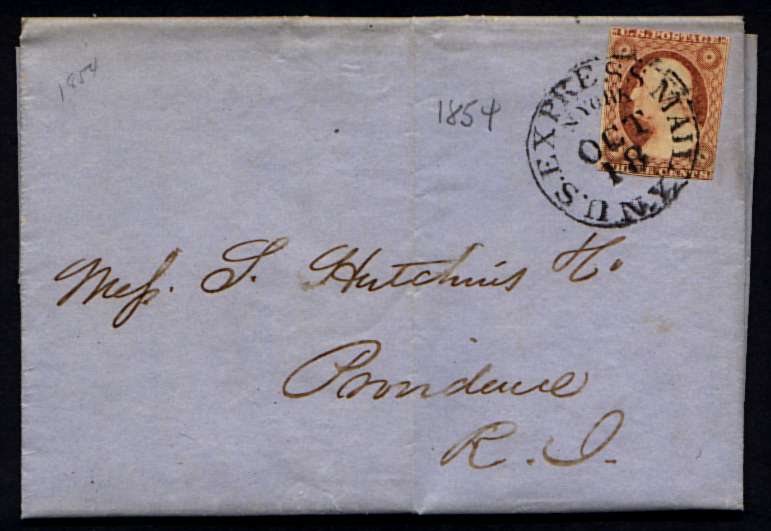 
The US Express cancels are listed in the US Route and Station Agent Postmarks by Towle p.222ff (MPOS 1986). They were a combination train and steamboat. Boston & Providence - Providence & Stonington - Stonington Line steamboat (Long Island sound). Also ran up the Hudson River to Albany. Some have the city on the cancel.

4/5/1 - I just received the copy of Towle's book that I ordered when Al sent me the message above, and there on p 222 is the marking on my cover - it's number 73-B-4, used from 1842-57, so the 1854 dating is quite acceptable. The route was specifically on the Boston & Providence to NY route, which makes much more sense than one via the Hudson River and Albany. Given that one could have made the entire journey from New York to Providence via steamboat on the Long Island Sound, though, it would be a stretch to classify this as a railroad postmark. Indeed, on page 225 of Towle's book, he shows this handstamp on a cover, and says "Used on Long Island Sound steamboat from New York City to Stonington, Conn. Service began June 21, 1842."