The UPU is an international organization of postal administrations, established in 1874 (and since 1949 a specialized agency of the United Nations Organization), which regulates international mail by establishing standards and procedures for such things as rates, accounting, and reimbursement. It is widely regarded as the most (some might say the only) successful effort at international cooperation, and is the reason you can drop a letter addressed to a foreign country into any US mailbox with confidence it will reach its destination almost anywhere in the world - presuming you know the proper postage, of course. While its rules are not entirely mandatory, they are made with the implicit understanding that any nation that fails to obey them could have its foreign mails denied delivery.

Some UPU pronouncements that have had interesting effects on U.S. stamps are the requirement in the early part of this century that the stamps for the most common classes of international mail be produced in standard colors - red for postcards and blue for first-class letters, for instance. That rule became impractical as multi-color stamps became the standard, and eventually the restriction was lifted. Another regulation, discussed here, was that the denominations on all stamps be indicated in Arabic numerals. That too has been abandoned.

Recently the UPU has been active in trying to stop the torrent of bogus stamps flooding the philatelic world. They have joined the World Association for the Development of Philately (WADP) to create a system (called the WADP Numbering System, or WNS), in which world postal authorities submit all their new issues to be recorded in a database which is then available to anyone interested, to verify whether a stamp is valid or not. You can see the results of their efforts, HERE. The idea is a good one, but the countries most likely to be targeted by the creators of bogus issues are the ones least likely to keep their information up to date, so its chances for success are poor, in my estimation. Still the database is a great resource for collectors.

The UPU has long been a popular subject for stamp issues, which form a collecting topic all their own. There used to be a UPU Study Unit in the American Topical Association (ATA), but it appears to have died. They do have a fairly current checklist of all UPU stamps, though (On their main page, Click on "Checklists", then "Alphabetical Listings").


Why did we need the UPU?

If you've been paying attention, you will remember my comment (on the N page) that before the UPU, figuring out rates for international mail was a nightmare. There were scores of individual treaties between pairs of nations, each with its own rates and special provisions; and one had to designate at the time of mailing which of the possible routes a letter should take, and calculate and pay the rate based on that route. Inscriptions on mail from the US such as "Über Bremen", "via Marseilles", and "Via London" are common, and certainly create interest and challenge for postal historians now, but were universally hated at the time. At each transfer point along its way every piece of mail had to be examined, and the debits and credits for its journey to that point figured and recorded. Then periodically all of that had to be totalled and the resulting monies due or owed transferred between postal authorities. The UPU put an end to all of that, by establishing standard rates for all international mail, regardless of the route it took. 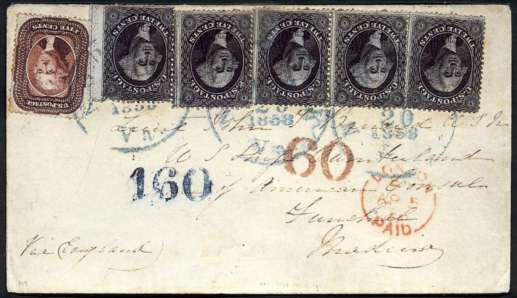 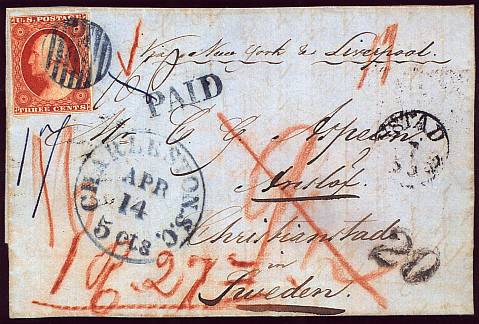 The two covers above are excellent examples of the nightmare of keeping track of who owed whom what for international mail in the days before the UPU. The 1858 cover on the left above (Siegel sale 744, lot 167) is a fairly simple one - it has 65 cents in postage (five 12's and a 5), and the inscription "Via England". The 5c would have paid the US domestic postage, and the 60c was supposed to cover the rest of its journey - so far so good. BUT the transfer office in London stamped it in red (a credit), accepting payment of 60 cents, the entire amount of remaining postage, so on arrival in Funchal, Madeira, it received the blue "160", indicating it was due 160 units of the local currency (reis at that time), and the recipient had to pay to take delivery. Apparently the clerk who accepted the item in the US calculated the rates wrong, OR perhaps he simply didn't know how much to charge for that last part of the letter's journey, and intentionally left that due from the recipient. We'll never know.

The 1852 cover on the right (image from Siegel auction catalog, sale 784, lot 2060) is more complicated, and I suspect part of the story is on the side we cannot see. The only pre- payment I can detect is evidenced by the three cent stamp plus the "PAID and CHARLESTON.S.C. 5 cts", implying the sender applied the stamp and paid 5 cts more to the clerk at time of mailing, which would have paid the US 5¢ inland rate only, leaving at least 50¢ more to be paid by the recipient. If the black "20" was applied in England to indicate a debit, that could mean 20 pence. A little web browsing informs me that one English Pound was worth about $4.80 U.S. in the 1850's, so 20 pence would be the equivalent of about 40¢ U.S. That doesn't seem like enough. Even the auction house gave up on this one, I'll let you figure it out.

It's a miracle any letter ever reached its destination in those days, and a tribute to the dedication and perseverance of the postal employees who made it happen. This too ended - or was at least rendered systematic and manageable - with the establishment and development of the UPU.

Below are only a few of the more than 300 different stamps issued by members of the British Commonwealth
for the 75th anniversary of the UPU in 1949. Many other countries issued many more.

You may have noticed that two of the designs are repeated on some of these stamps - these were all part of an "Omnibus Issue" by 78 of the member nations of the British Commonwealth, most (65) of whom chose to issue the same set of four designs (see cover below), differing only in colors, the name of the issuing country and the values. And can you find the stamp issued by Great Britain in that group above? It should help that they are in alphabetical order, but you may also remember (see F is for Firsts) that Great Britain is the only country world-wide that is permitted to issue stamps without a country name - they are identified by the portrait of the reigning monarch.

British Commonwealth Omnibus Issues and Common Design Types of other groups of countries are a popular collecting specialty - you can find them all listed in the special section titled Common Design types, in the introductory section of every volume of the Scott worldwide catalogues. 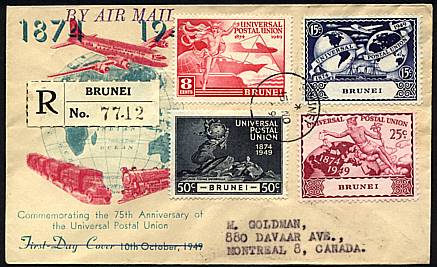 Note that the text designating this as a First Day Cover has been lined out, since the cover was postmarked on November 15, not October 10. Yet it contains the entire set of stamps, and is on the specially cacheted cover, and was part of a set of 1949 UPU FDC's I purchased recently. Perhaps there is a story here - are true FDC's of this issue from Brunei scarce? Stay tuned. 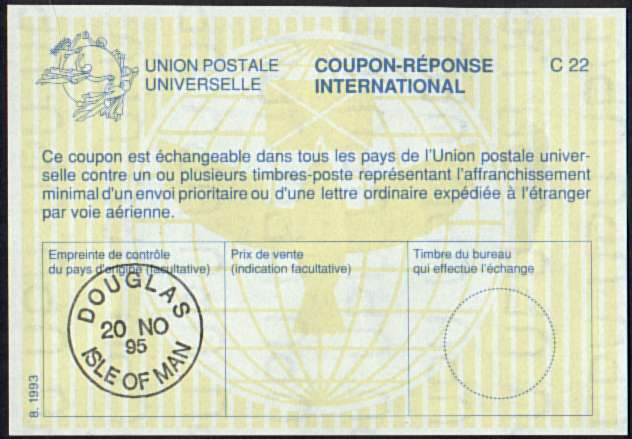 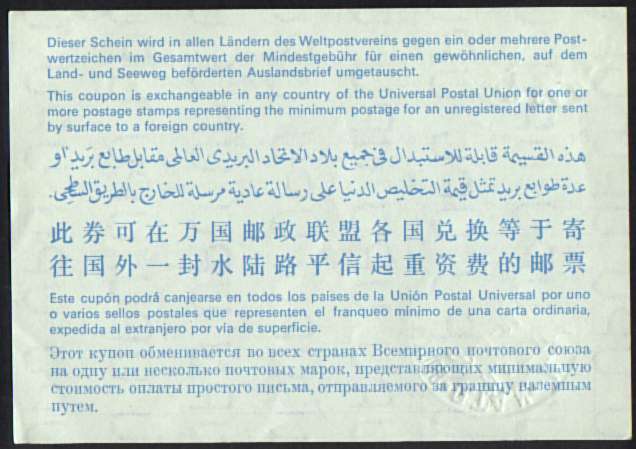 Another accomplishment of the UPU fairly early in its history was the establishment of these International Reply Coupons, the text of which reads

This coupon is exchangeable in any country of the UPU for one or
more postage stamps representing the minimum postage for an unregistered letter sent
by surface to a foreign country.

You can buy one of these in any post office of any member nation of the UPU, mail it to someone else in another country, and they can trade it in for the stamps required to post a letter back to you - or to someone else, if they prefer. The current (7/2/2004) price for one of these in the US is $1.75, compared to 60c for a 1/2 ounce letter from the US overseas. But according to the USPS pamphlet Publication 51, International Rates and Fees


International reply coupons (IRCs) provide foreign addressees with a prepaid means of responding to inquiries, solicitations, or other types of communications that are initiated by U.S. senders. IRCs are exchangeable for postage stamps by postal administrations in member countries of the Universal Postal Union (UPU). Each IRC is equivalent in value to the destination country's minimum postage rate for an unregistered airmail letter. The purchase price is $1.85 per coupon.

So the coupon itself says "surface" but the US Pub says "airmail". Whom can you trust?

Here is a link to a detailed explanation of IRC's. It also says "airmail postage".
I went to the UPU site to see what they have to say about the topic, and found the page HERE, and it too says "airmail", so I guess that cinches it.

As with almost everything else philatelic, IRC's are a popular collecting area. The coupons have been around for almost a century now (since 1907), and have gone through five basic designs, with many varieties - of paper, watermarks, minor design changes, etc. - within those, so a complete collection of just the designs would be sizeable, and if one tried to get one per issuing country, the number would swell to major proportions.

International Postal reply coupons figured in a major scandal in this country - does the term "Ponzi scheme" ring a bell? Named after Charles K. Ponzi, one of the most successful con-men/swindlers of the century, the term refers to any investment scheme in which returns are paid to earlier investors entirely out of money paid into the scheme by newer investors. The key to Ponzi's swindle of 1924 was the supposed profit he could make by trading in International Postal Reply Coupons, taking advantage of the difference in exchange rates and fees from one country to another. The foolishness of his claims should have been obvious, considering the huge numbers of coupons he would have had to process to generate the profits he claimed, not to mention the fact that the coupons are sold at a premium over the actual cost of postage, but the hopeful gullibility of even very intelligent people is always at the service of such crooks, and even after he had been arrested and exposed, many still pursued him to "invest" their money!

The UPU has an excellent web site,

with links to related sites. I recommend you explore there, if this subject interests you.

They offer a publication called The Guide for the Development of Philately, offered through their web site, which for about USD $25, delivered in six to eight weeks, is an interesting and informative analysis of ways postal administrations do and can promote their products to stamp collectors. (Fill out the online form, leave blank any of the official data that does not apply.)