Topicals are stamps related to a single topic or theme, such as birds, or trains, or household appliances.

This is a popular style of collecting, partly because there are fewer rules that govern it than for traditional philately, but also because it allows one to collect stamps from many countries on a much more manageable scale than a traditional world-wide collection. Topical collecting has its own organizations and standards, being in general more forgiving of non- philatelic material than the hobby overall. Some collectors see it as a way to express their individual tastes. Given the number and variety of stamps issued since the first one in 1840, it may be impossible to think of a topic that has not been shown on a stamp somewhere - lightning, murder, and paperclips are among the unlikely items people have sought, and found on stamps.

Some say that topical collecting is the only way to go. The total number of stamps issued world-wide is in the hundreds of thousands. Just keeping up with new issues would leave one with time for little else. Most collectors who want a world-wide collection have dealt with this by limiting their collections to only the stamps of a certain time period. Just the stamps up to 1940 is a popular choice, and Scott supports it by issuing a special catalogue, their Classic Catalogue, listing only stamps through 1940.

Collecting just one country or group of countries is another option. U.S. stamps are an interesting and challenging area, with lots of entertaining byways (as I hope this website demonstrates). Great Britain is another popular choice, since they issued the first stamp worldwide.

Topical collecting is the best of all, to me. One can still collect stamps of many countries, which I enjoy for the variety of styles and contexts, yet the volume of stamps is not unreasonable. Below are examples of a few topical areas. The list is almost endless. If you want to know more, the American Topical Association (ATA) helps topical collectors share their knowledge and enjoyment of their topics. Many stamp dealers specialize in helping topical collectors find stamps. eBay has thousands of topical items for sale in its STAMPS section. Give it a try.

(Click on any image below to view high-res version)

Trains on Stamps (and some related items)

If you've read my other pages, you know by now that my own favorite topic is TRAINS, so it should come as no surprise that I have a LOT of train-related advertising covers, cinderellas, EFOs, FDCs, handstamps, locals, overprints, RPOs, setenants, UPU stamps, War- related material, and in general anything even remotely philatelic with a train on it. There is even one invert error on a train stamp, but it sells for $15,000 used, so I have had to live without it. Here's a small sampling of train stamps and covers:

These are just part of a cute set issued by St. Vincent, which issues lots of colorful topical stamps primarily for collectors, all of which are anathema to the serious philatelist. But they're fun. The main topic is trains, but there's also Disney (which seems to be scorned even by the official topical collectors!), and I'm sure one could find a few others (How about hats? Smoke? Grass? Christmas?). 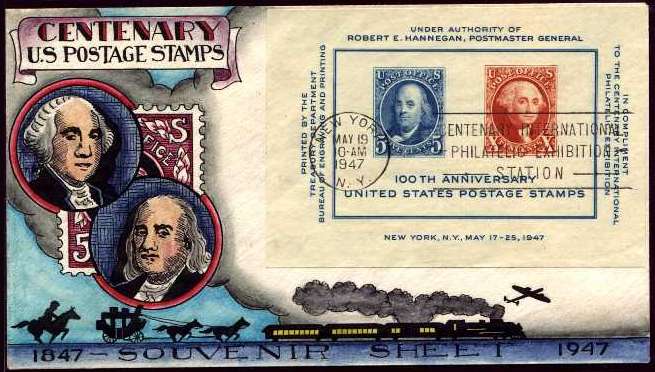 Dorothy Knapp was a professional FDC designer for one of the large FDC publishers in the 30's and 40's. She also produced and sold small numbers of her own hand-painted designs. Here's my favorite of hers. Because of their high quality and scarcity (she produced 10 or 12 of each), these sell in the $400-$500 range! 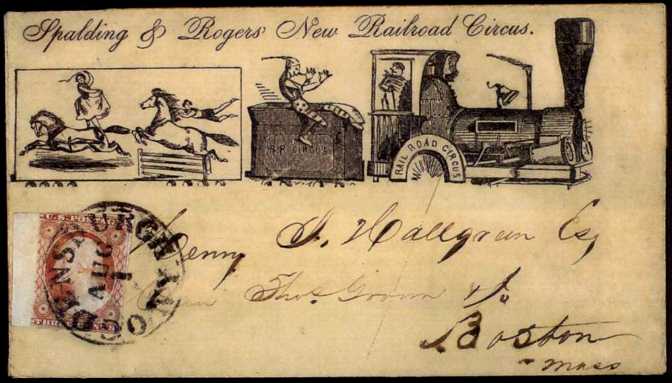 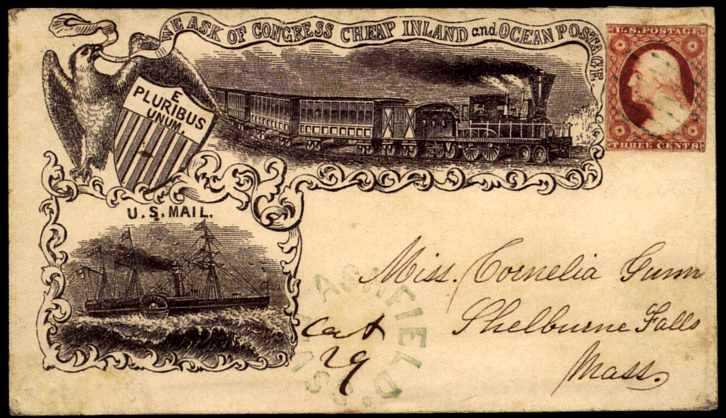 Here are a couple of wonderful 1850's Advertising/Illustrated covers. I think these sold for several thousands each, only partly for their designs. No, I don't own them, just the auction catalogs I scanned these from. 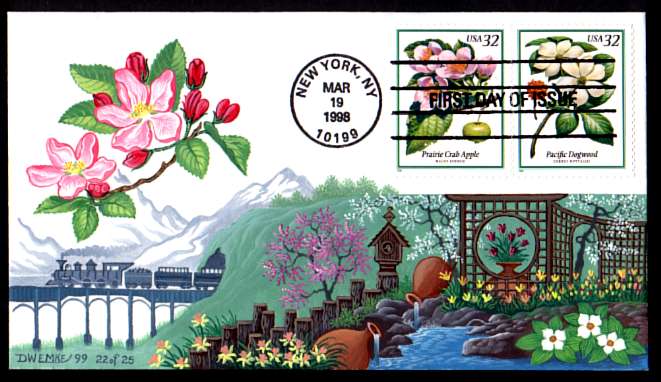 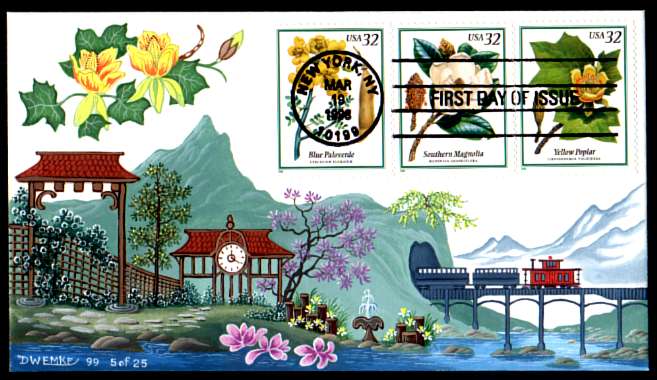 One of my favorite recent acquisitions is this exquisite pair of FDC's by D. W. Emke - these are completely hand-painted in the true sense of the word (many makers of hand- painted FDC's create a design that is printed on the envelope, and then color it in). No train in the stamps,of course, but who cares? I still count these among the treasures of my train stamps collection. 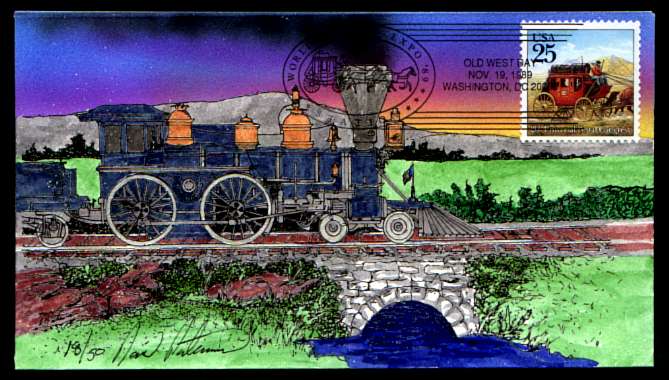 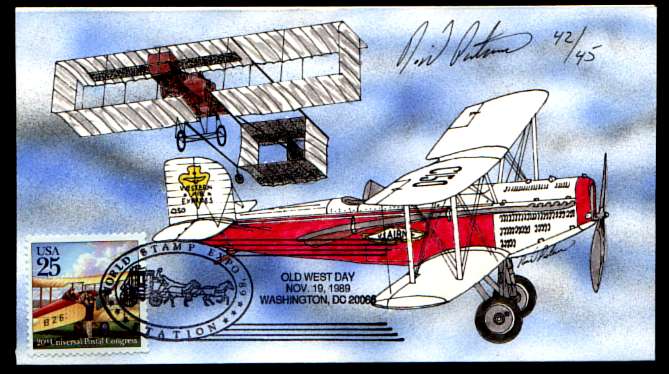 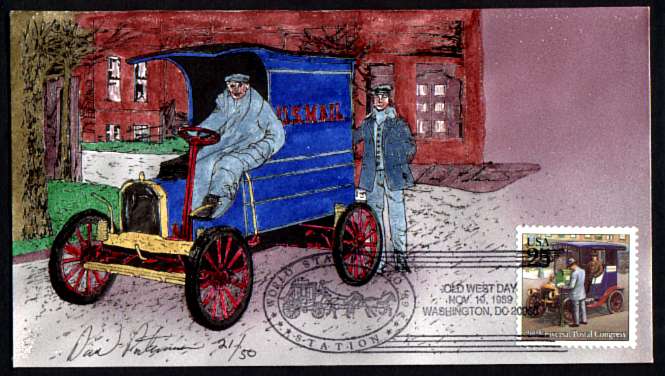 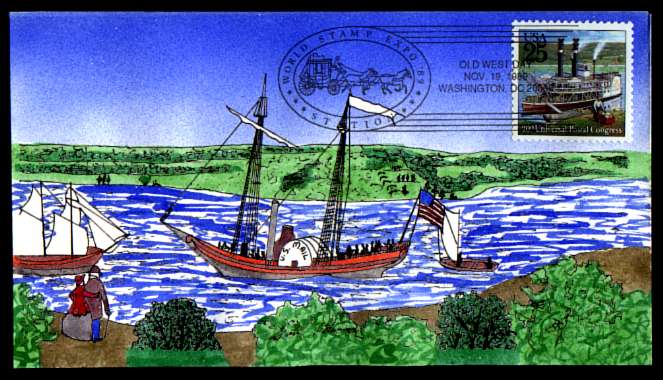 Here's a great set produced by David Peterman. He used thermography - a process you don't see much - to outline and highlight the design - all the black elements. It gives the images a drama and sharpness - almost a 3-D quality - that would be lacking without it. 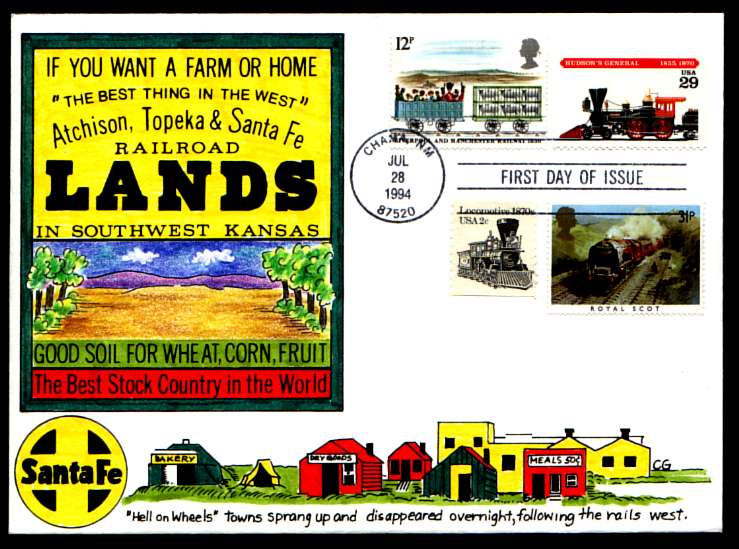 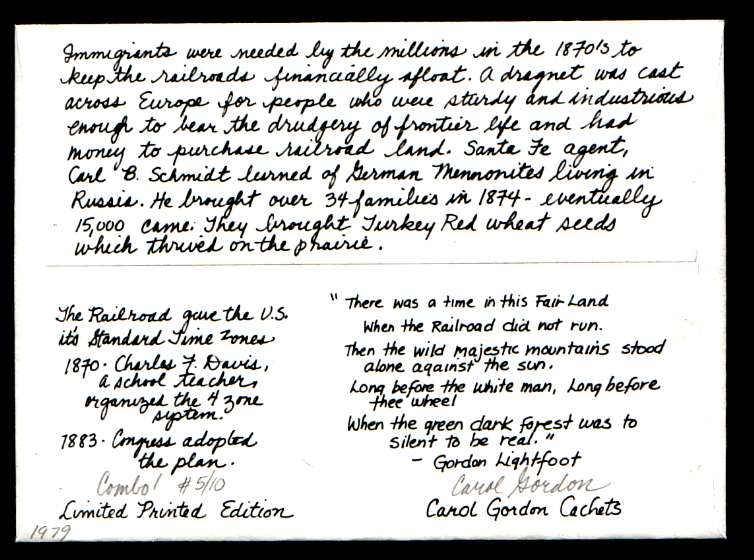 Carol Gordon created this cover, and enhanced it with the information on the back. I haven't seen her other covers, so I don't know whether this is a regular feature of her work, but I like it very much. The two things that catch my eye about a cover are the art work itself, and the message. This one wins on both counts.

How about all the U.S. stamps with trains on them?    Or Trains in Ukraine?
Trains on advertising covers?     Trains on Fred Collins Hand-Painted FDCs?
Trains, Trains, Trains!.

In tribute to one of the original sponsors of this project (Crane & Co.), I've started a small collection of cranes.
Below are two very nice hand-painted FDC's. 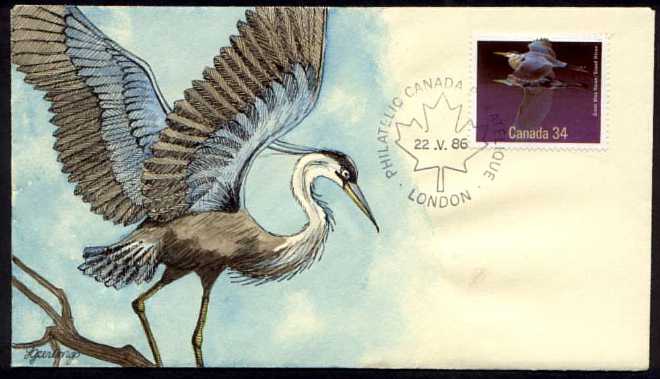 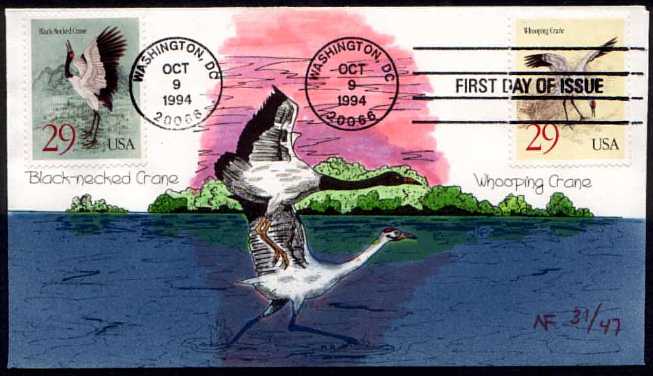 Or how about Dragons? 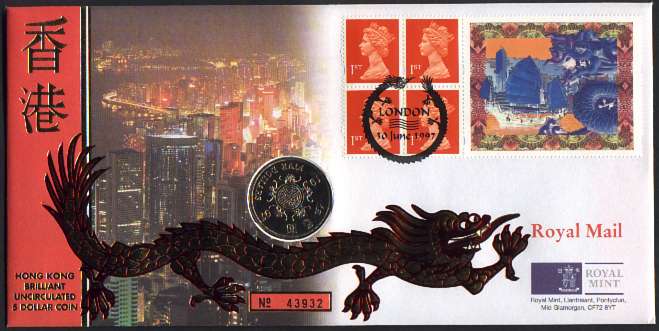 If my trains collection did not already consume all my spare time and money, this is the other topic I would pursue. Beware, before you attempt it, though - there are thousands of stamps with dragons, and many, such as the early issues of China (that's a reproduction of one of them in the souvenir sheet on the left above), are very expensive.

Another very popular topic with a lot of material available, most of it quite affordable, is Olympics. Most participating nations have issued at least one stamp for each Olympics of the modern era, starting in 1896. The set above was issued by the USSR in 1977 and 1978, in anticipation of the Moscow '80 Olympics. 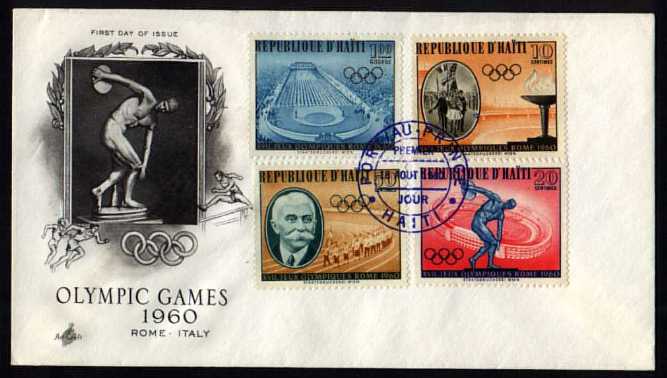 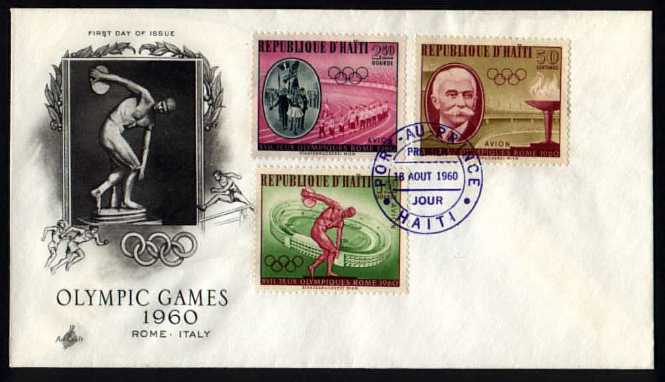 A pair of FDC's with a set issued by Haiti in 1960, for the Games held in Rome that year. 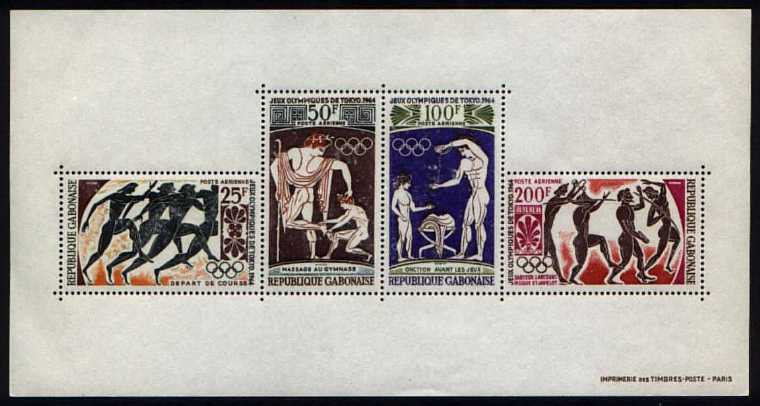 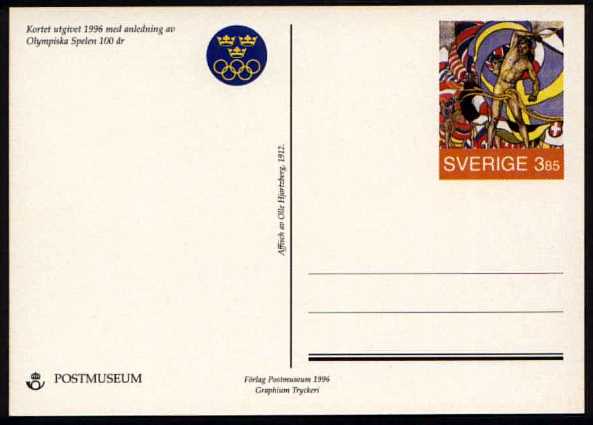 Postal Card issued by Sweden in 1996, with a reproduction, both on picture side and as the stamp, of the poster issued to advertise the Olympic Games of 1912. Its original design was regarded as obscene by many people of the time, and even after the addition of that ribbon its use was banned by several of the participating countries. I suspect it would be received even less well today.

There is a very active and well-organized society of topical collectors, the American Topical Association , which publishes excellent handbooks and lists for topical collectors, as well as a very entertaining and informative monthly journal, Topical Time.