Wars put a tremendous strain on all aspects of the societies involved, and their postal services are no exception. One result for stamp collectors is an amazing variety of unusual and fascinating war-related collecting specialties. We have already seen, in other pages of this exhibit, Patriotic Covers and V-Mail, and those two merely scratch the surface of the many war-related philatelic topics.

In the US, the War Between the States was particularly rich in this regard. To begin with, all US stamps in circulation at the time the war started were declared void, and new ones issued, to prevent the Confederate States from capitalizing on their stocks of stamps (this is the last time US stamps were demonetized - virtually all those issued since are still valid postage). There was also a shortage of coins during the Civil War, and enterprising private parties created substitutes by putting postage stamps inside metal disks with a transparent window on one side (to show the denomination) and advertising (of course) on the other. Called "encased postage", these are now rare and very collectible, to both philatelists and numismatists. Another popular Civil-War era collecting area is the stamps created for "Sanitary Fairs" in the Union states. Terrible shortages of almost everything imaginable in the CSA led to such strange practices as the use of maps, book pages, and even wallpaper for envelopes - these are called "Adversity Covers". The entire field of Civil War-era philately is rich with unusual material and interesting cultural and historical artifacts. Still other fascinating war- related collecting areas include Soldiers Mail and Censored Mail, Fractional Currency, and AMG stamps of the post-WWII period.

Coins were in very short supply in the Union states during the Civil War, partly because of the war effort, but also because of a general lack of faith in the paper money in circulation at the the time, so that people hoarded coins - I presume they were still minted with valuable metals such as silver and gold back then. The problem reached crisis proportions, until Congress monetized postage stamps(!) - an odd choice, to be sure. Loose stamps wore out quickly, so people created small envelopes and cardboard holders for the stamps. These wore out too quickly as well, so in 1862 a man named John Gault devised and patented the small metal and mica cases shown below, and was hailed as the savior of the day. To make the scheme profitable, he sold advertising on the backs.

Here is an excellent article on encased postage.

The examples above are the earliest types, with no advertising on the back - just the manufacturer's name. Gault sold these directly to merchants and private individuals, charging a small markup to make a profit. Plain-backed coins like these, in good condition, with clear, uncracked mica and relatively untarnished cases, usually sell for $200-$400 each. Poorer quality examples might go for as little as $100. Note that the two above sold for $6,600 and $2,200(!), because of the stamps they contain, and their relatively excellent condition.

The images above show a representative sampling of better quality Encased Postage. These would sell for several hundred dollars to as much as a thousand dollars each at auction. What makes them valuable are the combination of scarce advertising on the back and near-perfect condition overall.

This "Feuchtwanger strip" is a crude variety of encased postage about which I have been unable to learn anything definitive. The few cryptic descriptions I have found in books and auction catalogs imply it dates from the Civil War, and that is consistent with the stamps enclosed. I am seeking further information.


The definitive book on Encased Postage is Fred Reed's Civil War Encased Stamps, which I recommend not only for its unparallelled wealth of information about the topic, but its historical interest and entertaining style as well. It is filled with fascinating illustrations and incidental details that make it a joy to read. Unfortunately, it is out of print, but any of the major philatelic literature dealers should be able to find you a copy - or just try a web search.

When the Civil War broke out in 1861, the Union government had the USPOD issue a full set of new stamp designs, and declared all previous stamp issues no longer valid for postage, so that any stocks of pre-War stamps in the South were rendered useless. In the North, one could turn in old stamps in exchange for new ones. Covers like the ones below reflect the implementation of this policy. They all bear demonitized stamps, and were delivered "postage due" - the recipient had to pay the postage. 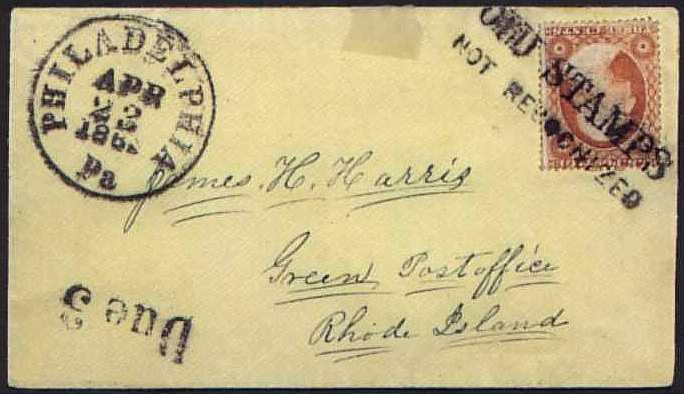 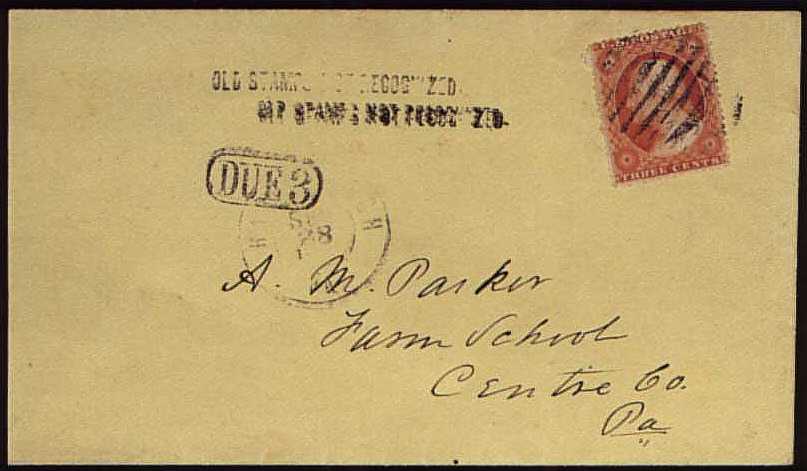 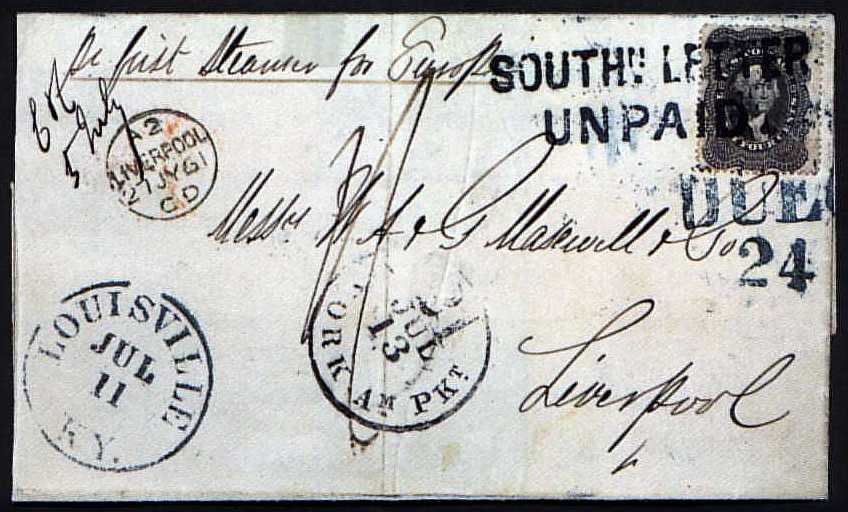 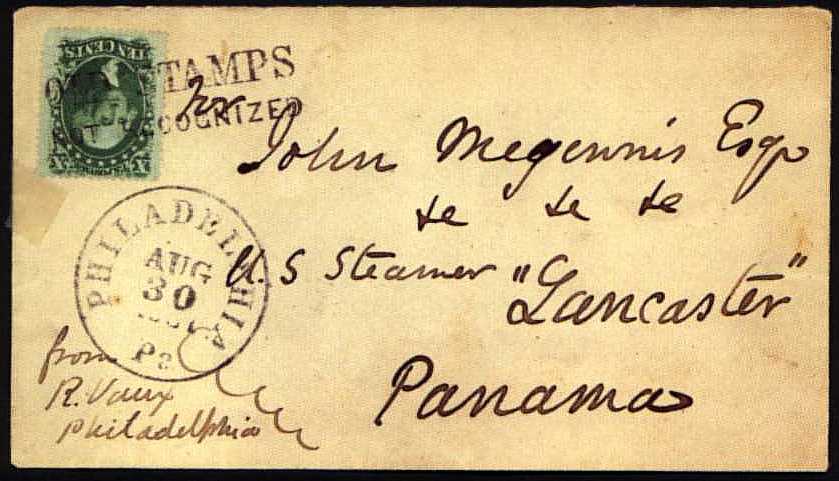 Valid, authenticated Demonitization covers such as these are scarce and valuable - prices of the ones above range from $2,000 to $100,000 (!) The key to their value is those handstamps - "OLD STAMPS NOT RECOGNIZED" and "SOUTHn LETTER UNPAID". Note as well the other handstamps and numerals - some of these would fit well on the H and N pages of our alphabet. The tiny thumbnail next to some of the covers is a link to the auction catalog description of that item above - click for an enlargement, and more historical information about demonitization. All these scans are from auction catalogs of the Siegel Auction Galleries, and are reproduced with their permission. Full credit for each image can be viewed by clicking on the little white box next to it - an enlarged image of the auction text will open up.

Soldiers Mail is basically any mail sent by a soldier in wartime. Most soldiers mail of this century exhibits a Free Frank. Much of it shows censors marks as well. These markings, as well as military postmarks and military unit ID's are avidly collected by postal historians.

The items above are all WWI soldiers mail, from US personnel with the American Expeditionary Forces in Europe, and all display both free franks and censors marks. While the unit markings revealed nothing about the sender's whereabouts at the time, some of them can now tell us where the letter originated. Covers like these can be bought for $5 or $10. What might make one more valuable would be an unusual destination or usage, unusual postal markings, or a famous sender or addressee.

Remember - you can view a closeup version of any image, just by clicking on it

None of these WWII items shows a Free Frank, because the senders all wanted Air Mail service, for which they had to pay the full rate. I like the "Idle Gossip Sinks Ships" imprint - that's a USO envelope. You may have heard another more poetic version of that admonition - "Loose Lips Sink Ships". The last one - return address "C.B.M.U. 549" (A Seabees Unit) - we now know to have been sent from Construction Battalion Maintenance Unit 549 at Kwajelein, in the Marshall Islands. At least that's what's written on the back of the cover. A bit of Googling on the www confirmed that. The first three have APO (Army Post Office) addresses (European Theater), whose meanings can be decoded HERE.

About the same time it authorized the use of postage stamps as currency (see Encased Postage, above), the US Congress also authorized the creation of "fractional currency", or paper money denominated in cents. The first issues (1863) had designs based on stamps, but once the concept gained acceptance, designs became more like regular currency. The fifth and last issue was in 1876.

These are usually called "Postage Currency", because the images in the centers are basically the then-current stamps of 5c and 10c denominations, singly or replicated - you may not be able to see it on these scans (I swiped them all from ebay auctions), but they were even perforated! The size of each note was about 3" x 4". 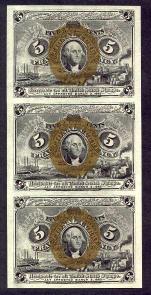 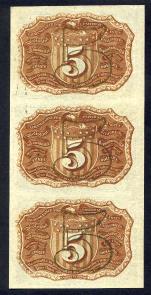 The Second Issue looks more like real currency, and was isssued only imperforate, in sheets that were cut apart with scissors, but all four denominations used the same design, which led to confusion in their use. Above are the front and back of a partial sheet - Hey, there's a train! I think the entire sheet had eight bills. The third and subsequent issues look still more like real currency, and have different colors and designs for each denomination.

One of the best web sites for images of encased currency and fractional currency is the auction site of Early American History Auction Galleries. You'll have to make your own judgement about whether to bid on their offerings, but they have a great assortment of material, and high- quality images to view.