The Confederate States during the Civil War - ADVERSITY COVERS

Living in the midst of such relative peace, wealth and plenty, it's hard for us today to imagine a time when there was such a shortage of every commodity in parts of this country that people had to resort to ripping wallpaper from their walls to make envelopes, but it happened in the Southern states during the US Civil War. Maps and the end papers from books were used as well, but somehow wallpaper conveys the desperation most vividly, and "wallpaper covers" are popular collectibles. Below are three choice examples.

The price of a wallpaper cover varies according to appearance, stamps and usage. Condition is always important, but a rare stamp, or a scarce destination can make a cover especially desirable. Cheaper ones sell for as little as several hundred dollars, but gems such as the last one above, with a bisect, and forwarding postage, sold for $6,750 + 10%" in 1994. All of these have been cut and folded back to show the wallpaper design, which would have been on the inside when they were mailed.

For an excellent essay on the topic of the CSA postal service, visit this site .

The US Civil War was the first in which Patriotic envelopes were produced, presumably because it was the first in which envelopes were common enough to make such a concept feasible - most mail before the 1850's consisted of folded letters, sealed with wax and addressed on the back, since rates were high, and based not on weight but the number of pages. It was only the advent of cheap postal rates and postage stamps, starting in 1847, that made envelopes practical. This one, from the South, is simple, but impressive to me for the fervor of its message - 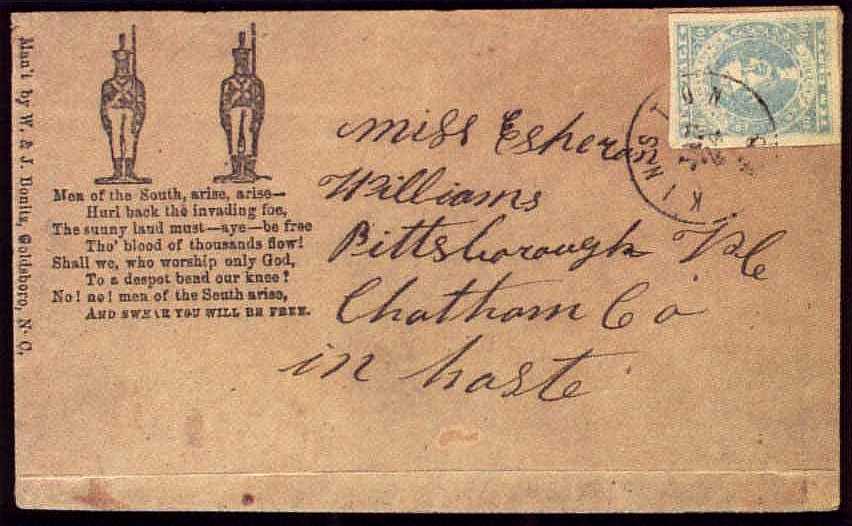 And why that ominous notation - "in haste"?

What could be more patriotic than a flag?
The first of the ones below is from shortly before the Civil War, pleading for Union.
I presume Yellow Springs was a health spa, hence the note "Water Cure". 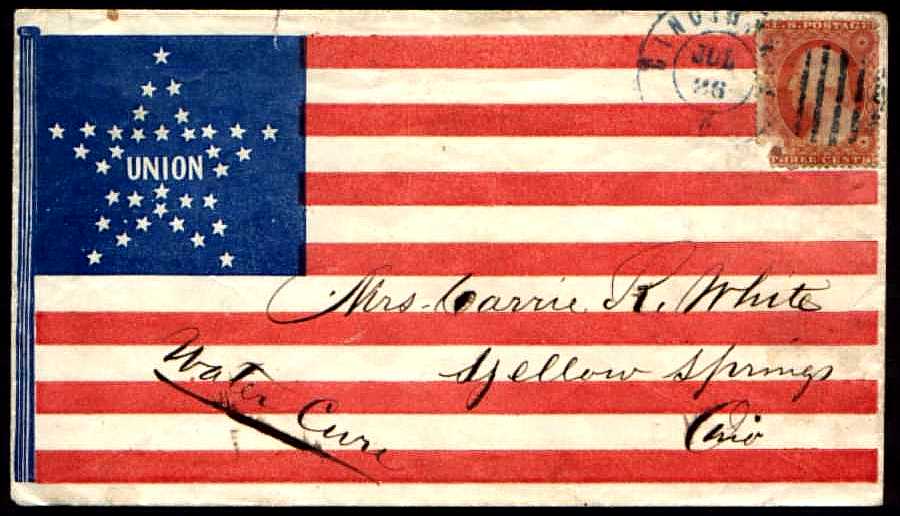 I was perusing your website, when I came upon your reference to Yellow Springs,
(which is where I briefly attended college) referred to in the Flag cover section.

Yellow Springs, Ohio was the site of one the first experimental self-contained
communities of the mid 19th century, that ultimately failed, which had a spa at its center.
About the same time in the 1850s, Antioch College was founded (by Christian religious interests),
which is also located in Yellow Springs. They contributed heavily, in terms of manpower,
relative to the size of the local populace, to the Union Cause, and the town had abolitionist
leanings, yet they also had pacifistic tendencies because of a large Quaker presence.

I did a quick search on the topic and found this:

Nestled in the gently rolling farmland of Chester County, the village of Yellow Springs
has a unique 250-year history of helping others. A stroke of geological good fortune
created dozens of mineral springs in the area, which were quickly discovered and used to
improve health by the local Lenape Indians. Throughout its varied history, whether as
Revolutionary War military hospital, health spa, orphan´s school, art school, or movie
studio, the whole village has been dedicated to improving the quality of life for other
people.  http://www.yellowsprings.org

The pair of covers below are from the Spanish-American War, when patriotism (or at least public expressions of it) seems to have been especially high. Note the different configurations of the stars - the cover on the left, from September of 1898 has 44 stars, but the one on the right, from November, has 45, yet no states were added to the Union that year. By my reckoning, the correct number is 45, with Wyoming the 44th, in 1890, Utah the 45th, in 1896, and Oklahoma the 46th, in 1907. New stars are supposed to be added to the flag on the July 4 following a state's admission, so there should have been no question about the correct number at this time. Was this just a mistake? An old envelope being put to new service? Or was there some dispute current about what the real states were? Stay tuned. 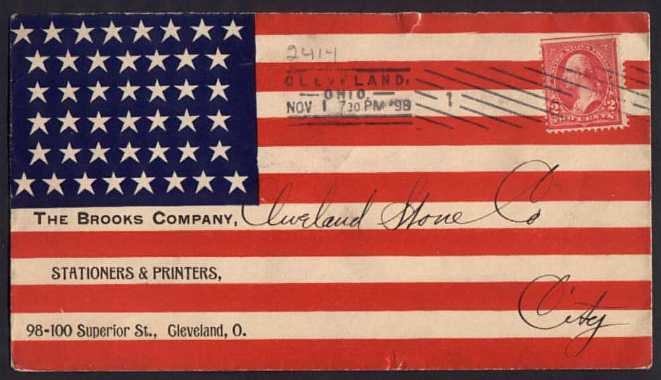 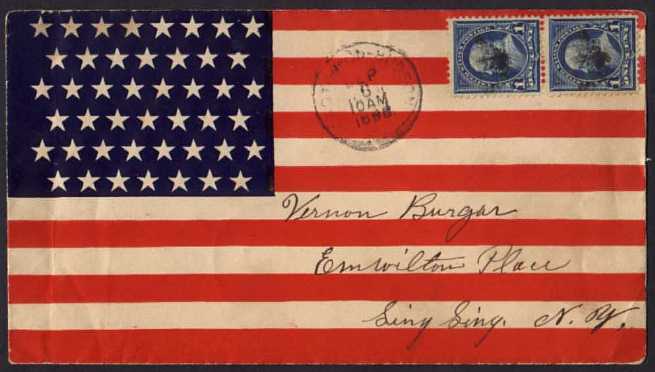 Do you collect Flags On Stamps? Collector Bob Hunt has started a study group for that topic - email him at "bh1861@att.net" and tell him you want to join.
OR visit his web site to learn more. 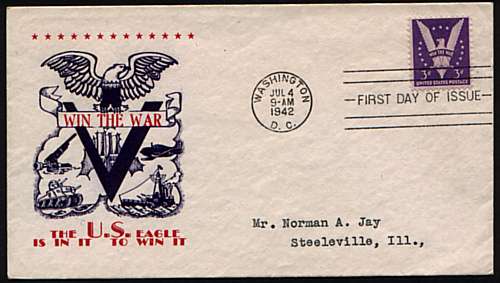 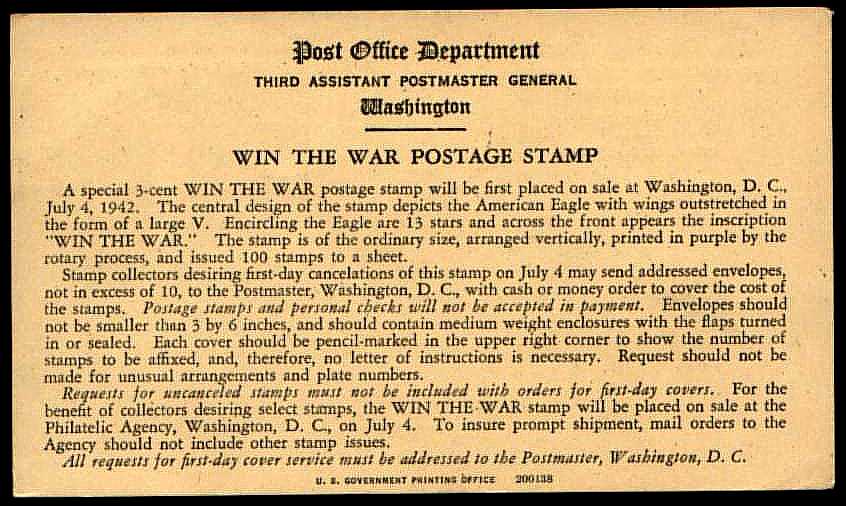 Here's a fairly common FDC of the 1942 Win The War stamp. The cachet is one of Dorothy Knapp's commercial designs. The recipient saved inside it the official announcement of the stamp, which makes a nice accompaniment. 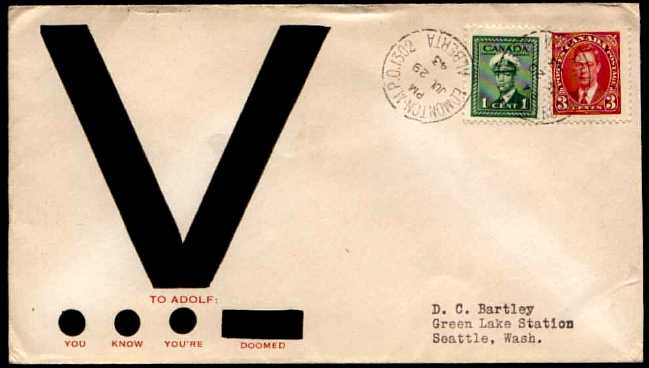 Block of four 3c stamps, which were issued by the U.S.A. Post Office on July 11th 1945 to commemorate the raising of the 'Stars and Stripes' on Mount Surabachi on the island of Iwo Jima on February 23rd 1945.

What makes these stamps very special is that each one has been signed by one of the men who participated in the raising of the flag. This man was JOHN H BRADLEY a Navy Corpsman who held the 'Navy Cross' He has signed each stamp and under his signature has written 'SURVIVOR'. John is the figure in the centre of the photograph. The other five, all U.S.Marines, were Mike Strank, Ira Hayes, Franklin Sousley, Rene Gagnon and Harlon Block. Only Ira Hayes, Rene Gagnon and John Bradley were to survive the campaign.

Recollections of the flag raising on Mount Suribachi during the Battle of Iwo Jima by Pharmacist Mate Second Class John H. Bradley, USN, with the 5th Marine Division.

POW mail can be one of the grimmer collecting areas - the letter below, from a German POW at the end of WW I to his parents and sister back home, contains birthday wishes for his father and hopes that they will all be reunited soon. I deduce from the handstamp (enlargement) that the POW camp was British, in Catterick, Yorkshire, England. The mixture of English and German is odd - "Hutte" is German for "Hut" or "Building", so Wilhelm was in Building 14 of the camp. 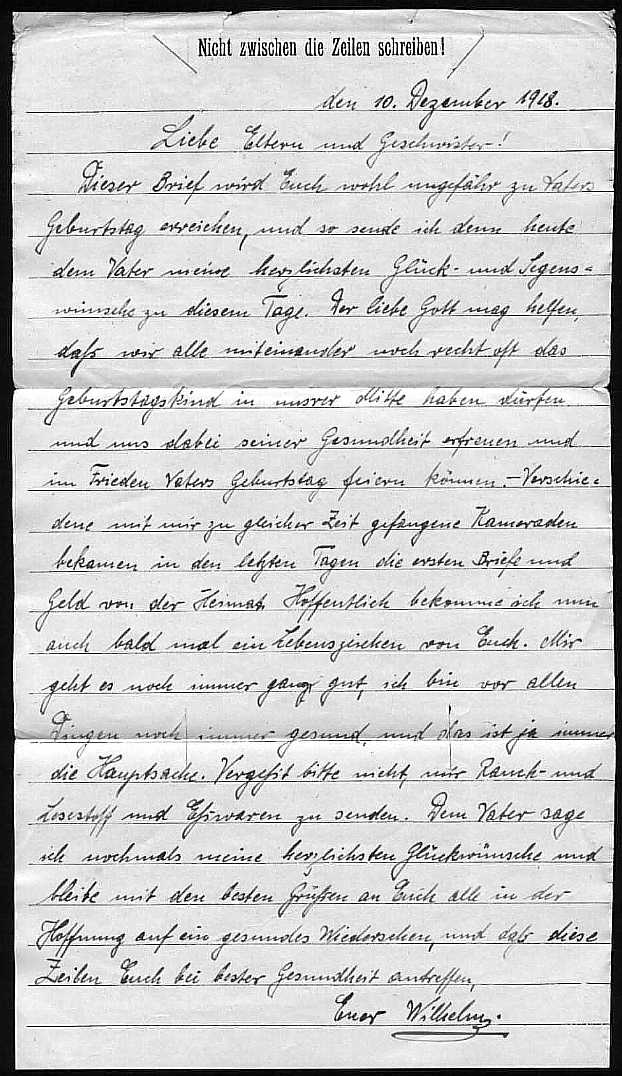 Did he make it home? And how did he and his family fare in the chaos of the 20's and 30's in Germany? Perhaps they moved to the US, and that explains my acquiring it so many years later - it has no philatelic value - I don't even remember how I came to own it, but I presume it was part of some miscellaneous hodge-podge, perhaps the same one that contained the item below. If so, perhaps the item above is also a facsimile.

I acquired the item above as part of a miscellanous lot that contained something else I wanted. It appears to be a card from an American POW held by the Japanese in Taiwan, and I hardly looked at it until I saw a photo of a similar item in The American Philatelist, the monthly journal of the American Philatelic Society, of which I am a member. Its owner was soliciting information about its origin. Looking closer, I was intrigued to see that our two items were not just similar, they were identical! Realizing that it was impossible we should both have items so completely alike, I examined mine more closely, and discovered it was a reproduction, presumably part of some sort of fund appeal of Boys Town, and probably one of millions of copies. Oddly, that enhanced its value for me, though I'd still like to know more about it. 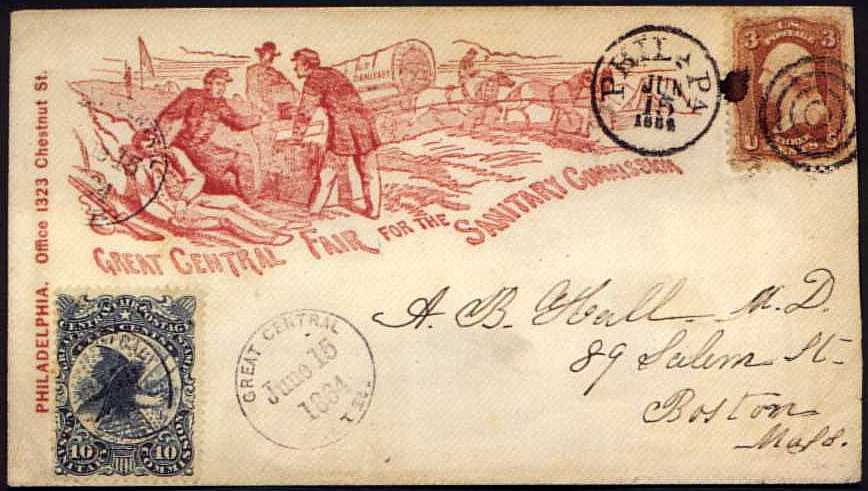 The Sanitary Commission was a volunteer benevolent organization in the Union states during the Civil War (precursor of the American Red Cross). The group's members provided nursing and hospital care for the wounded, and funded their efforts with "benevolences" or fairs, which I picture as resembling the ball in Gone With The Wind where Scarlett, though in mourning, dances with Rhett and creates a scandal. Some of the fairs issued special stamps (which are of course "Cinderellas", though I think this is after she married the prince, considering their prices), and sold them for use on letters that could be written at and sent from the fairs. Special envelopes such as the one above were also produced. The production of these "Sanitary Fair Stamps" was of high quality, all things considered, and covers bearing them, especially if they contain a valid US postage stamp of the period, can be quite valuable - the one above sold for $32,500 + 10%" in 1995!

12/30/02 - I just watched an episode of Antiques Roadshow, and one of the appraisers described an item as perhaps having orginated at a "Civil War Sanity Fair"(!) He used the term twice, so it's clear he thought that was the correct term. No, they were called "Sanitary Fairs", as they were put on by the U.S. Sanitary Commission.


MORE ABOUT THE SANITARY COMMISSION: