An alphabet is an old reliable concept for presenting a topic in an entertaining way (as my web site itself attests!), and has been used on poster stamps, of course. The set below, distributed by New York Edison in 1913 to promote electricity, is quaint and charming today, when we are exhorted to use LESS, not more, and electrical conveniences are so much taken for granted that it is hard to imagine a time when they were a novelty, and people had to be persuaded to try them.

As you can see, there are four frame colors: blue, green, pink, and lavender.

The distinction between the pink and lavender is sometimes difficult in these scans, though first-hand it is unambiguous. Further complicating things, I used two different scanners, and they were calibrated diferently. But you get the idea.


One question that always comes to mind for me when I encounter sets like this is
How were they printed? Was each letter printed separately, or all letters on
one sheet? We have a partial answer to that question in the strip of three below,
contributed by viewer R Roberts.

So it is possible that all 26 stamps were printed as a single sheet.
I would love to know how it looked, as there is no likely multiple that equals 26,
so there must have been duplicates of some stamps, or other labels to fill out something like 5x6.

5/27/2009 - I acquired two strips of three in an eBay auction recently.
Note that these, as well as the one above, lack the imprinting beneath the image,
and that all have the blue frames. Can this be coincidence, or were they printed
separately in this format? The placement of the selvedge on the one strip is odd too.
I mean why would K, L and M be on the top row?

12/14/2009 - I acquired more multiples, including a full set in green
in multiples of 2, 4, and 6, ALL with selvedge at the top! Some of those fit
together into larger multiples, yielding the following images: 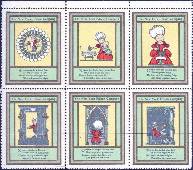 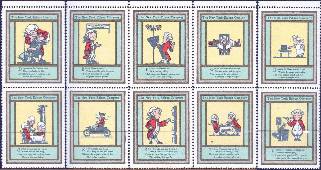 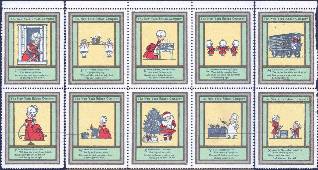 So, unlikely as it seems, they *may* have been printed in sheets 13 wide by, say, ten tall.
AND, none of these have the imprinting at the bottom.

BUT, I have some multiples in the other two colors (which I call pink and lavender), and these all have the imprints.

In case you prefer to save your eyes from the torture of trying to make out the text on the set above,
here it is all on one page.
Click here to access my web page about the 1936-1951 Poster Stamp Bulletin of the National Poster Stamp Society.