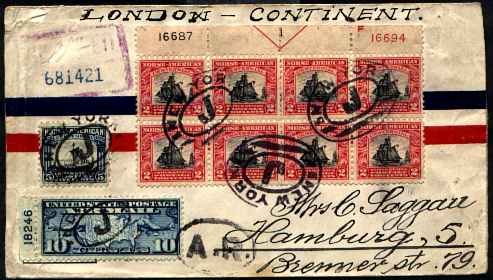 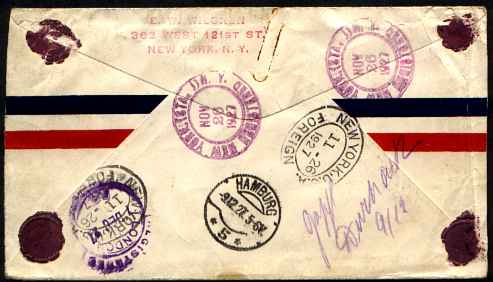 The year is 1927. No story here, just a nice cover, with a full plate block of eight of the 2c Norse-American stamp, a single of the 5c value, and a single of the 10c Map Air Mail, for a total of 31c postage. There are no Due markings, so this must have prepaid the letter correctly, which works out, since the Air Mail rate at the time was 10c per half ounce, Registration was 15c, and the Air rate from London to Germany was 6c. There was not yet a trans- Atlantic air mail service, of course. The letter would have gone by ship from New York to London, but if one wanted air mail for any part of the route, it had to be paid for the entire route. We know it was Air Mail two ways - the blue and red bands on the envelope, and the Air Mail stamp, both of which were reserved for Air Mail. The letter was posted on Nov 26, received in London on December 7 and in Hamburg on December 12. Twelve days seems reasonable for the trans-Atlantic ship crossing, but five is high for London to Hamburg - perhaps the letter went by surface mail on the Continent for some reason.
Any experts out there care to offer an explanation?

I like this cover for its conflicting opinions. A postal clerk initially stamped the cover "RETURN FOR POSTAGE" - difficult to read beneath the ball-point strikeout. Someone else overrode that opinion, and added the TWO strikes of "EVIDENCE POSTAGE APPARENTLY AFFIXED" (the "APPARENTLY" is redundant, isn't it?), plus the "DAMAGED IN HANDLING IN THE POSTAL SERVICE", a polite admission of responsibility for whatever mishap had occurred. 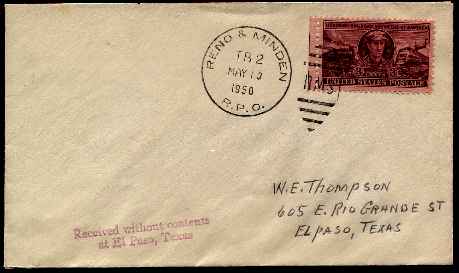 Postal regulations require that this handstamp be added to any envelope found to be empty, even if it appears the absence of any enclosure was intentional. In this case, I know that the sender was actually collecting RPO postmarks, because I have several such covers, identical except for the postmarks. The moral is that unless you are collecting this handstamp, put at least a blank piece of paper in any envelope you mail (though as automated as things are these days I doubt it matters). 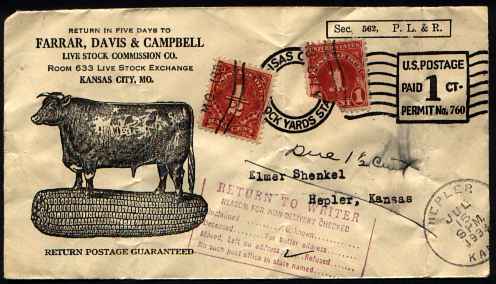 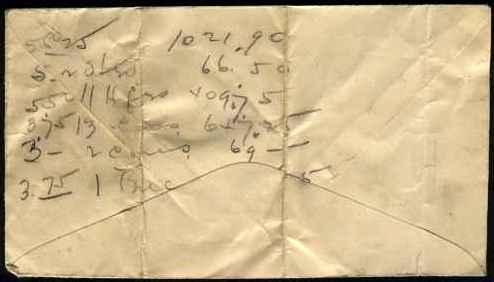 Were it not so wrinkled, smudged, and generally abused, this would be a very collectible Advertising Cover. I bought it for its Postage Due stamps and handstamps. The use of Postage Due stamps was discontinued a couple of decades ago, indeed few people even know they ever existed, so I like interesting examples of their use. In this case, since the envelope apparently contained advertising initially, and was mailed in a bulk mailing and using a permit cancellation, we would ordinarily have no idea of its date. BUT thanks to that "RETURN POSTAGE GUARANTEED" we have a nice datestamp - July 15, 1934.

Using "The Beecher Book", I deduce that this was mailed using the "Third-Class, Regular, Bulk/Quantity-Discount" 1¢ per piece minimum rate in effect from 10/1/32 through 2/24/49 (Sec. 562 PL&R). That explains the "PAID 1 CT" in the permit imprint. My interpretation of the fee for returning the item is that it was charged as if forwarded, at a fee equal to the single-piece rate for this type of mail. The rate for Third-Class, Single-Piece from 4/15/25 through 1/1/49 was 1-1/2¢, which fits fine.

You may wonder why the sender would pay for the return of the item. What they actually wanted was a forwarding address, which would have been sent instead of returning the item, if it had been known. And as for the scribblings on the back, no philatelic value there, just some on-the-fly bookkeeping.

"He who is his own doctor has a fool for a patient!" 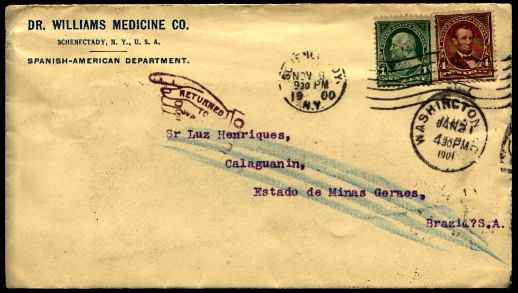 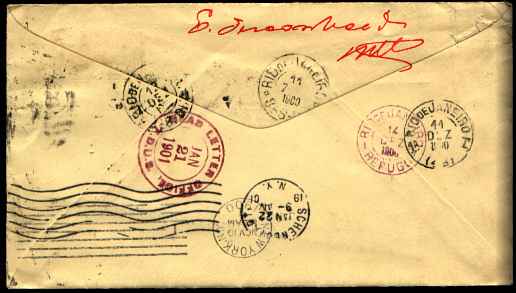 Here's a favorite of mine - Scott 279 and 280 on cover to Brazil, November 9, 1900, with various transit markings, including pointing hand ("RETURNED TO WRITER") and DLO (Dead Letter Office) cds (circular date stamp).   Minas Gerais (current spelling) is the large inland state directly north of Rio de Janeiro. Calaguanin is not shown on the current maps I had available (and in an Internet search using Google just now, the only reference it returned was this page!).

Translation of enclosed letter (in Spanish, not Portuguese):

Dear Sir:
In reply to your very esteemed medical inquiry dated October 10, we regret to inform you that your illness does not lend itself to treatment through the mail, and consequently we suggest that you consult a good physician in that area, and submit to his treatment.

In other words, "We do not practice medicine by mail. See a doctor!"

(Apparently the addressee had expired by the time the letter reached him, as it was returned.)

Actually, considering that this letter was pre-Food&Drug Law in this country (1906),
perhaps it's surprising they refused to send the drugs.

Steamboats were used to carry mail within the US during a relatively short period, and letters received handstamps like these only when actually posted on the boat, so earlier ones like those above are scarce and can command a high price. The one below (Towle O-21- b) is later, dated April, 1874 (docketing on reverse), and more common - it would sell for about $50. It was postmarked by a Route Agent on the Cincinnati-Louisville steamboat on the Ohio River. 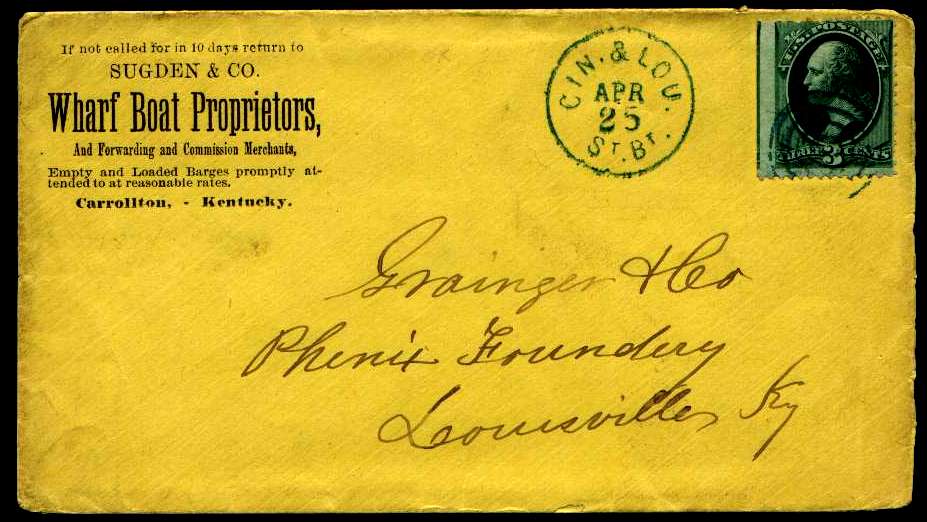