WHAT WAS THE FIRST SETENANT WORLD-WIDE?

That's on his "First Firsts" page, at http://www.snap-dragon.com/first_firsts.htm, where he reveals the first examples worldwide of various types of stamps such as First Airmail, First Booklet, First Multi-lilngual, etc. And First Composite.

I like Firsts, so I was intrigued, but I had never seen or heard the term "composite," so I wrote and told him the correct term is "setenant," to which he replied - "I took that from Mackay's book, Philatelic Terms Illustrated."

I own a copy of that book, so I consulted it and found that it says:

Composite Stamps. Stamps in which the design is spread over two or more stamps.

I see. So the first US setenant issue, the Christmas greenery, is NOT a composite, but the second, the Space Twins, is.

SE-TENANT. French expression signifying "joined together." Used to describe adjoining stamps or labels which differ from each other in value, inscription, design, colour, or some other respect, such as one overprinted or surcharged, and the other not. Stamp booklets and coil strips often include different stamps side by side, but this practice has become increasingly fashionable in sheets of stamps where it is used to create composite designs.

Reluctant to open a can of worms, I nonetheless started looking through all my philatelic reference works to see whether this term "composite" appeared elsewhere, and what the formal definition of "setenant" was. I checked nine other philatelic glossaries and dictionaries and encyclopedias, and found the following:

1. None includes the term "composite."
2. All have "setenant" or "se-tenant," but some say it applies to ANY pair of stamps joined together, others say it applies ONLY if their designs differ.

So they have a definition of composite, but it differs from Mackay's, and their definition of setenant agrees with mine - not just any joined pair, but ones with differing designs.

I noticed that Mackay is British, so the difference in terms may be partly a difference of local customs.

But the term "composite", meaning a design spread over two or more stamps, does seem useful to distinguish the two types of setenants. What is the other called, then, when each stamp has an independent design? A "non-composite setenant?" That's very awkward.

Nick identifies the pair below as the first composite design setenant, Poland Scott 767-68, issued in 1957.

But now he and I wonder -

What was the first setenant world-wide?

I did a little research, and if we can agree that setenant means joined stamps with different designs, and the difference must be intentional (let's rule out errors), then so far the earliest setenants I have found are from Germany and its colonies pre-WWI, e.g. German Southwest Africa 27b, a booklet pane of six stamps, four of one denomination (#28), two of another(#27), showing the Kaiser's yacht, "Hohenzollern". All Scott says about the issue date is 1906-19. Stamps of the same design and format were issued by Cameroun, issue dates 1905-18, Scott 21 and 22. Germany itself issued similar booklet panes with Scott 82 and 83, 1905-19, but showing Germania, rather than the yacht.

Michel is a little more helpful. It lists the approximate issue dates of the booklets as April, 1913 for the German one, and mid-1913 for the other two. It makes sense that the German one would have been first, so let's say April, 1913 is the date to beat - that at least sets a starting point.

South Africa and Southwest Africa printed stamps with English and Afrikaans on setenant pairs, but that didn't start until 1923, so we needn't consider those.

Tete-beche (joined stamps, with their designs in opposite directions)? Doesn't count, since once they have been separated the stamps are identical. 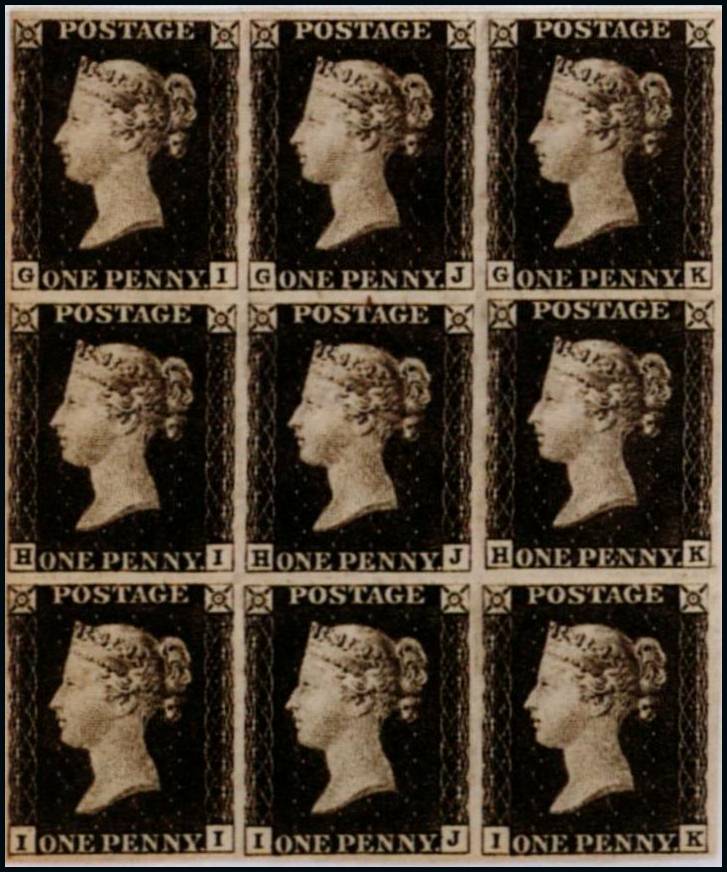 Then it occurred to me that the first stamp of all, the Penny Black, is a setenant issue - each stamp on the sheet is unique in its corner letters! Above is a block of nine (from a full sheet of 240), from rows G through I, columns I through K.

I think we should rule that out (the same device was used on all of the early GB issues, it was intended as a security device, and to help with book-keeping). And I think we should exclude as well anything related to overprints.

We should also exclude labels, there were many booklet panes and some sheets of stamps with advertising or just an X to take up an empty space on the pane - read more about the X's on my X page.

So the German booklets are still the earliest setenants I can find. Anyone care to propose a candidate earlier than 1913?

March 29, 2009 - An anonymous visitor to this site wrote to suggest that the famous St Louis Bears (shown below) are the earliest setenant stamps, since they were printed in sheetlets of six, with three of the 5 cent stamps, and three of the tens. 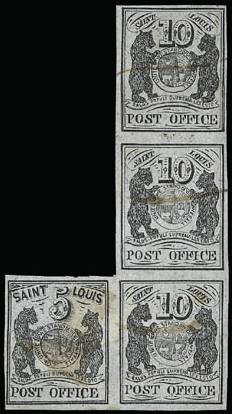 The full story of the St Louis Bears can be read HERE.

April 24, 2011 - Benjamin Folkman wrote to point out that the famous Providence Provisionals - "just as early as the St. Louis Bears" (well, not quite) - were printed on sheets of twelve and contained eleven 5c stamps along with one 10c stamp, the latter in the top right position. Image of the setenant pair below. Image of the full sheet (thanks Siegel) HERE. And thanks, Benjamin.

What about the earliest modern setenant?

... whether composite design or not, that is, the first one printed for artistic purposes, rather than practical ones?   We shall rule out errors, overprints, dual-language pairs such as those from South Africa, and anything else done out of necessity or carelessness. I think I have seen rectangular stamps perforated diagonally, the halves to be used as bisects. Let's exclude those, they were probably an emergency or economy measure.

We'll exclude also the Parcel Post issues of Italy and its colonies, which had two halves, one to be glued onto the waybill, the other onto the sender's receipt. Those were first issued in 1914, Scott Italy Q7-19. And again Tete-beche doesn't count, since once separated the stamps are identical. It must be at least two stamps, with different designs, side by side (or top to bottom), issued that way because the designer said "Hey, wouldn't it be cool to use more than one design on the same sheet?" (or the equivalent in the language of his day.) Is that Poland 767-68, issued in 1957?   Or is there one earlier?

If we allow Postage Due stamps, Monaco J39-56 were triangular stamps printed in pairs, setenant. They were issued June 29, 1953. If we exclude Postage Dues, some of those same stamps were overprinted for ordinary postal use in 1956, and have Scott numbers 371-390 and C49-50. But I said we would exclude overprints.

In 1950, for its postage stamp centenary, Australia issued two stamps, Scott 228 and 229, printed in sheets of 160, the two designs alternating. This certainly qualifies.

If we allow souvenir sheets, France issued one in 1937 with four different stamps in two vertical rows of two, separated by a row of labels. That was Scott 329. As issued it had broad borders on all sides, but once they have been removed, the result looks like this: 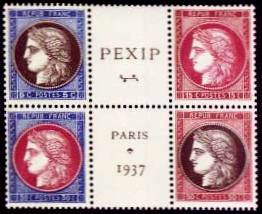 But that is beaten by Scott US 778, a souvenir sheet. It was issued in 1936, with four designs in a block, setenant and imperforate. Again, if we cut off the borders, it looks better as a setenant design. 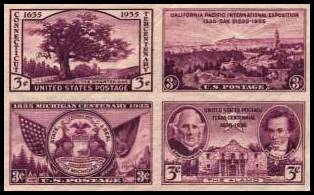 Germany can beat that - Scott B68, 1935, another souvenir sheet (I'm detecting a theme here), with four different stamps, setenant. 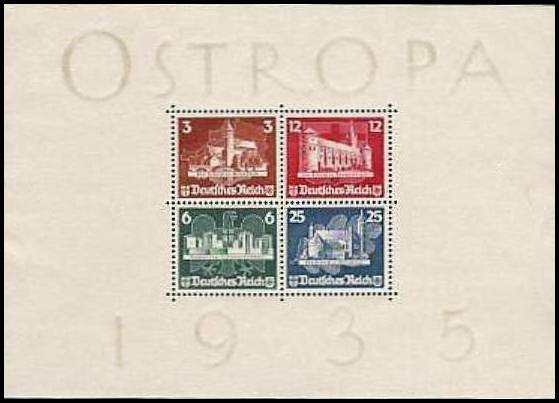 Italy's first setenant was still earlier - Scott C48 and 49, May 20, 1933, a set of airmail stamps in celebration of the historic flight of General Italo Balbo's 24-seaplane squadron across the Atlantic to the Chicago World's Fair. 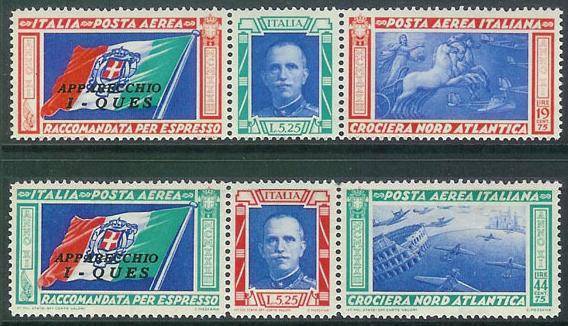 These stamps were printed in two panes of 60 stamps each, comprising 20 strips of three. The leftmost stamp is an Express label, with no postal value.

IPOSTA was an International Phlatelic Exhibition, held in Berlin September 12-21, 1930. The souvenir sheet is 105x150 mm (about 4"X6"). Each holder of an admission ticket was entitled to purchase one sheet. (Scott, vol. 3)

Back to France again - in 1927 they issued a souvenir sheet for the Strasbourg Exhibition, with two stamps separated by a label. Again, that label could be a problem - is this a setenant issue? Even if not, France certainly seems to have issued the most setenants back when they were something special.

That's the earliest "modern" or "artistic" setenant I can find (i.e., one created for artistic or design purposes).

Can you find an earlier "artistic" setenant?
Or, if you prefer to exclude souvenir sheets, what's the earliest then?
All responses are welcome. Send your findings to