Zeppelin Post is mail that was carried on Zeppelin airships.

From its start in 1900 until the fiery death of the Hindenburg in 1937, Zeppelin airflight amazed and enchanted the world. Count Ferdinand von Zeppelin, inventor of the concept, was a colorful, almost fanatical character who spent his entire sizeable fortune on building and promoting his immense airships, but it was Hugo Eckener, Zeppelin designer, pilot, and enthusiast, who made Zeppelins household names around the world in the 1930's.

The entire area of Zeppelin mail is a popular collecting specialty. Mail was carried on most flights from 1908 on - indeed, the Zeppelins could not have survived, had it not been for the income they derived from carrying mail - and many stamps were issued especially for Zeppelin post, including a set of three issued by the US in 1930, and a fourth in 1933. The denominations of the earlier set (65¢, $1.30, and $2.60) were very high for the time, and many collectors regarded the issue as a postal conspiracy to bilk them. Usually called simply "The Zepps," the 1930 issues are very popular, and are considered one of the hallmarks of an advanced airmail collection, since a set is still rather pricey (decent unused copies of all three will cost you at least $1000). The 1933 "Baby Zepp" was a bit more affordable - 50¢ - but what the stamp does not show is that by that time the Graf Zeppelin had a swastika on its tail (the Nazis had commandeered it as a propaganda tool), so neither the airship itself nor the stamp was popular in the States. Even that cheaper issue is not cheap today, its catalog value is $75 mint and $70 used.

Speculators forced the prices of the "Zepps" to astronomical levels in the early 1980's (Here's a graph of US stamp prices, from Linn's Stamp News, showing that rise and fall), distorting the entire stamp market for many years, and eventually, when prices suddenly returned to normal, bankrupting some unwary investors. Some called it "Count Ferdinand's Revenge".

Click on any image below to view a high-res version,
or let your mouse arrow rest on top of an image to read technical data about that item

(The card below was mailed from the International Air Flight Exhibition held in Frankfurt, Germany in September of 1909.
Thanks to Dieter Leder of the British Aerophilatelic Society for the translations of this and the second card following.)


Count Ferdinand von Zeppelin (photo inset on the card above) was a man obsessed with his vision of airflight in the enormous, hydrogen-filled dirigibles he invented and built from 1900 until his death in 1917. He bankrupted himself creating them, and had it not been for the salesmanship, genius and dedication of another man, Hugo Eckener (card below), the Zeppelins would never have prospered as they eventually did for a time. It was Eckener who recognized that popular enthusiasm for the idea in spite of its impracticality and official rejection could be converted into funds to sustain it, first through outright donations from the citizens of Germany, then through the profits from carrying mail.

The card below is from the Graf Zeppelin's first Round the World Flight, in 1929, mailed from Lakehurst, NJ. There appear to be some autographs under the flight cachet, but I can't make them out. Note that the total postage is $1.78, quite a lot at the time, especially for just a souvenir.

As romantic and enchanting as Zeppelins were, they seem to me little but a curious byway of modern technology, one that has left little impression on our modern world. I suspect that were it not for the Hindenburg's dramatic and tragic exit, which has fixed an image of them in our minds, Zeppelins might be forgotten entirely. Consider, for example, that Hugo Eckener was perhaps the most famous man in the world in the early 1930's (seriously), yet his name is forgotten today - neither my dictionary nor my desk encyclopedia mentions him, and a Google search just now yielded many German sites about him, but few in English.

Still, I understand their appeal to the public then, and to collectors now. Warning! This material can be addictive!

The earliest Zeppelin post was souvenir cards with unofficial postmarks applied on board the airships and then tossed out to crowds below as a publicity stunt! Surviving examples of those cards are now worth fabulous sums, and reside mainly in museums -sorry, no pictures available. But the enormous contraptions fascinated the public from the start, and were a popular subject on ordinary postcards, which were all the rage at the time.

It took nearly a year, from 1899 to 1900, to build the first Zeppelin air ship, now called the LZ 1. Construction took place in a shed resting on floats in Lake Constance, near Friedrichshafen, which became the base for all subsequent Zeppelin flights from Germany. That Zeppelin flew only three times. The card above, mailed from Friedrichshafen to Vienna on 11/4/1900, shows a contemporary watercolor of the giant dirigible and its shed.

It took the Count until 1911, and the LZ 10, before he succeeded in building a Zeppelin that survived long enough to justify long-term development of the concept. The military had developed an interest by then, and indeed Zeppelins played an important part in Germany's fighting in WW I. 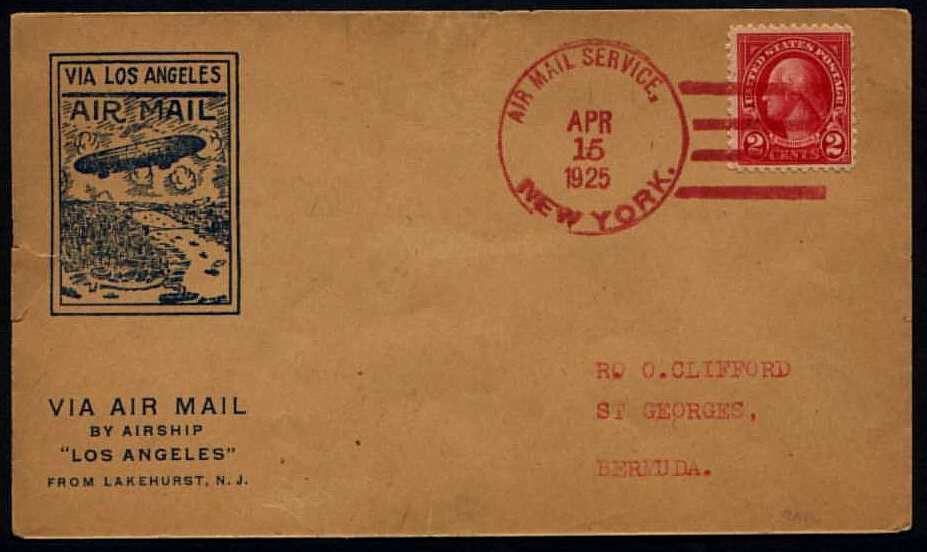 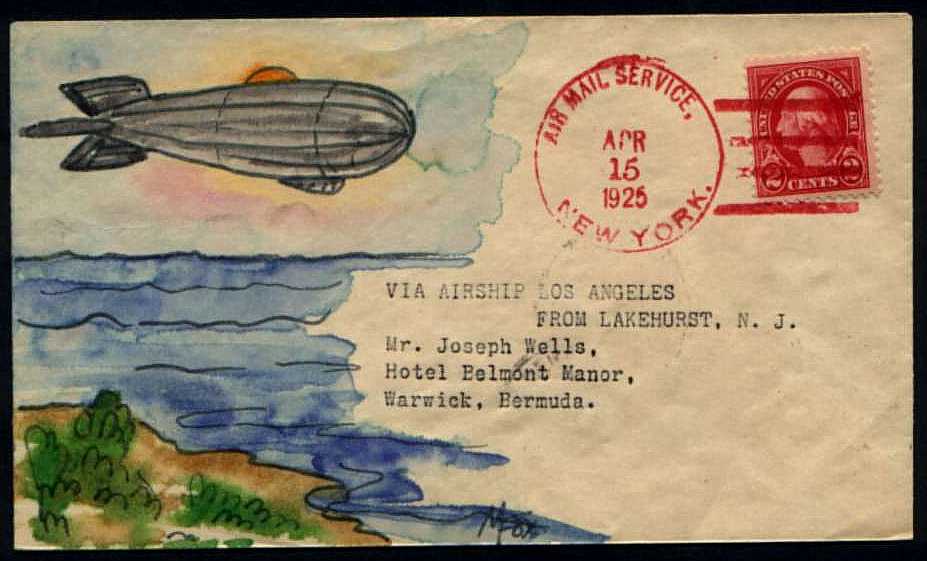 After World War I, the German military was forbidden by terms of the Versailles Treaty of 1919 from building more Zeppelins. In 1924, thanks at least partly to suggestions of Hugo Eckener, the US Navy decided it should test the Zeppelin's utility for its own military use, and ordered one from the Germans. The result was LZ 126. Its delivery to Lakehurst, New Jersey on 10/15/24 required the first Zeppelin flight to North America, and gave US citizens the opportunity to see a Zeppelin first-hand in their own skies. Renamed the Los Angeles, it served reliably until 1932, when it was decommissioned, making it one of the few US dirigibles to avoid disaster of some sort. The two covers above were carried on one of many Airship Los Angeles flights that accepted mail for souvenir-hunters.

( Here is a more detailed version of the story of the Los Angeles.)