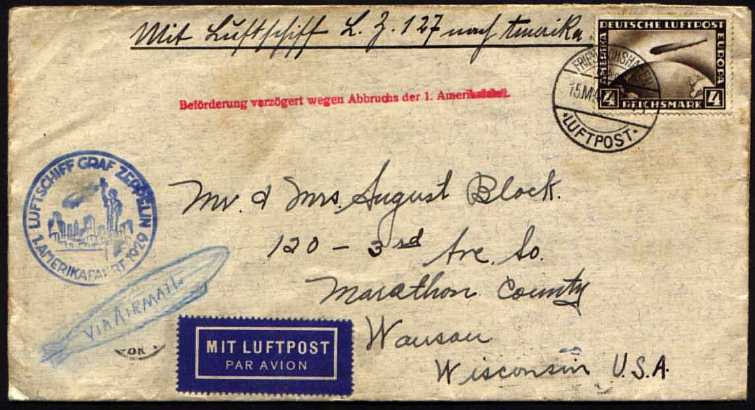 Germany issued its first Zeppelin post stamps on 9/20/28 (Sc. C36 and C37). There had been unofficial stamps, and overprints, prior to that date, but this was the first real postage stamp created for mail to be carried on the Zeppelins. The cover above (with C37) began its journey from Germany to America on the flight that departed on 5/15/29, but technical difficulties required that flight to be interrupted at Cuers, a tiny village in southeastern France, near Toulons - hence the red handstamp, which translates Delivery delayed because of break in 1st America flight. The flight was resumed on 8/1/29, and arrived at Lakehurst on 8/5/29. The one slightly puzzing element of this cover is the partial postmark beneath the hand-drawn zeppelin in the lower left corner. One can't help wondering if the drawing was added to conceal something. But what? 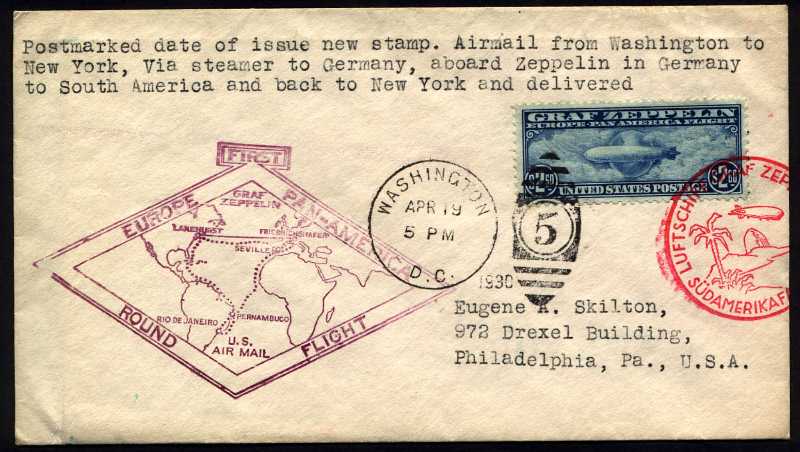 Here's a nice First Day Cover for the high value of the set of US Zeppelin stamps issued in 1930. I like the neatly typed, detailed specifications for its travels, and the clearly applied rubber stamp showing the route on a map.

The 1930 US Zepps were the first Zeppelin stamps issued outside of Germany, and are a tribute to the salesmanship of Hugo Eckener. In the US to receive a medal from the National Geographic Society, for his accomplishments in Zeppelin travel, he socialized with US government officials, and when he learned that the wife of the Postmaster was a Zeppelin enthusiast, pitched the stamps to her husband, who could not refuse.

Here are all three of the US Zeppelin stamps of 1930. The set of three cost $4.55, a lot of money then, even if it had not been the first year of the Depression. What's more, they were valid as postage ONLY on mail carried on the May, 1930 Europe-Pan America round trip Graf Zeppelin flight, making them little but souvenirs from the start. Sales were very poor, fewer than 100,000 of each stamp, and the rest of the one million sets printed were destroyed, making these relatively scarce today, and somewhat justifying the high price a set like the one above will bring - these three sold for "$2,000 + 10%" in Siegel's March 10-12, 2004 auction. 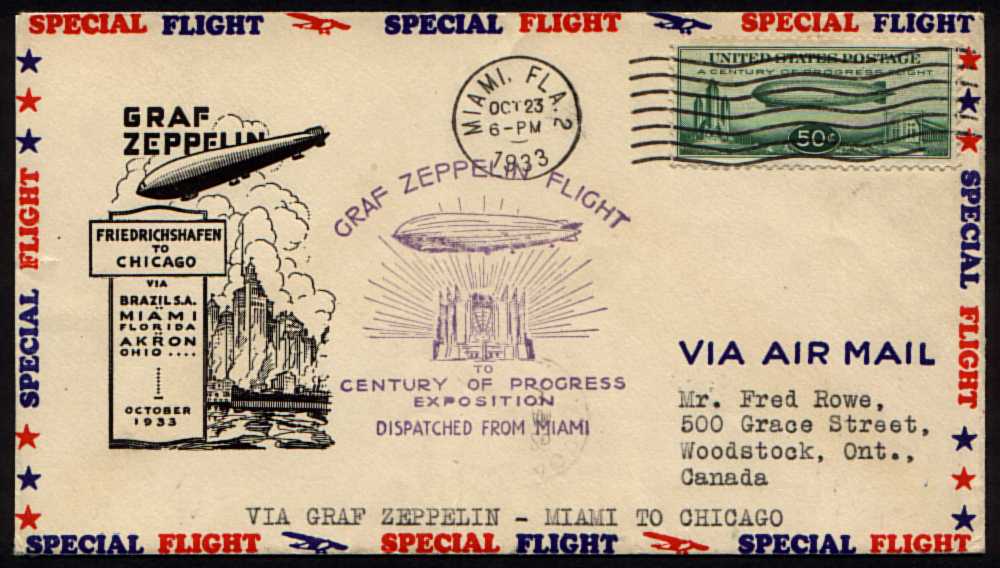 These covers are NOT First Day Covers for their stamp, the "Baby Zepp", issued in 1933 in conjunction with the Century Of Progress World's Fair in Chicago, 6/1/33 to 11/1/33. Zeppelin post was still expensive - fifty cents for the flight from Miami to Chicago, and this stamp was basically just a souvenir. More were sold (over 4 million) than the earlier set, so while not cheap today, a decent mint copy of this one can be acquired on eBay for $50 or so.

When Chicago invited the Graf Zeppelin to make an appearance at its World's Fair, the Nazis were not yet in power, but by the time the visit actually took place, there were swastikas painted on the airship's tail. Eckener, who had made the trip hoping to repeat his triumphs of earlier voyages, was anti-Nazi, but unable to prevent Hitler's usurpation of his creation, and found himself jeered and snubbed in the States. The Zeppelin made only the briefest of appearances in Chicago, shooed away by local officials afraid of trouble, and Eckener went home angry and disillusioned.

Max Johl, in his indispensable United States Postage Stamps, 1902-1935 reproduced photos of essays for this stamp, which I reproduce here below, as I always find it interesting to see what other ideas were considered, and rejected, for a stamp, and how the final design evolved.

ZEPPELIN POSTAGE STAMPS AROUND THE WORLD

When Zepplin mania heated up in 1929, the USSR wanted the Zeppelin to pay them a visit, but hated the Germans. Eckener refused to stop by unless the Soviets issued a special stamp, as he had persuaded many other countries to do by then. This was the result, the USSR "Graf Zeppelin and Call to Complete 5-Year Plan in 4 Years" set issued 9/10/30 - they simply added a Zeppelin to a stamp already in the works, AND made it appear the Germans were endorsing Soviet programs! Eckener was counting on the proceeds from a large volume of mail to pay for the trip, of course, so the Russian bosses imposed such tight constraints on sales of stamps and processing of the covers that only 9,000 letters and 4,500 postcards actually made the flight. Imperforates like the pair above are scarce - these two catalog $700 each, while the pair sells for $40 in its ordinary, perforated state. 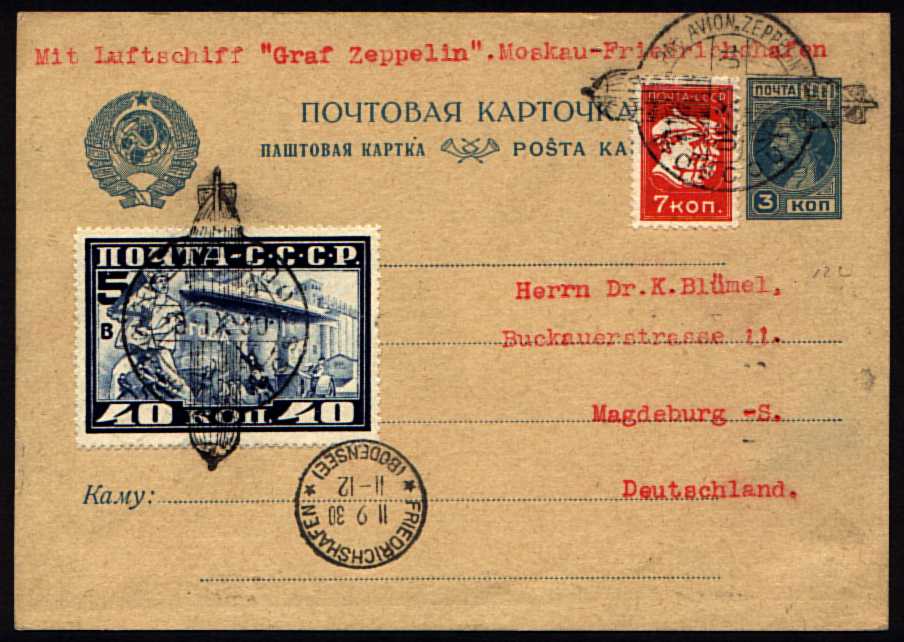 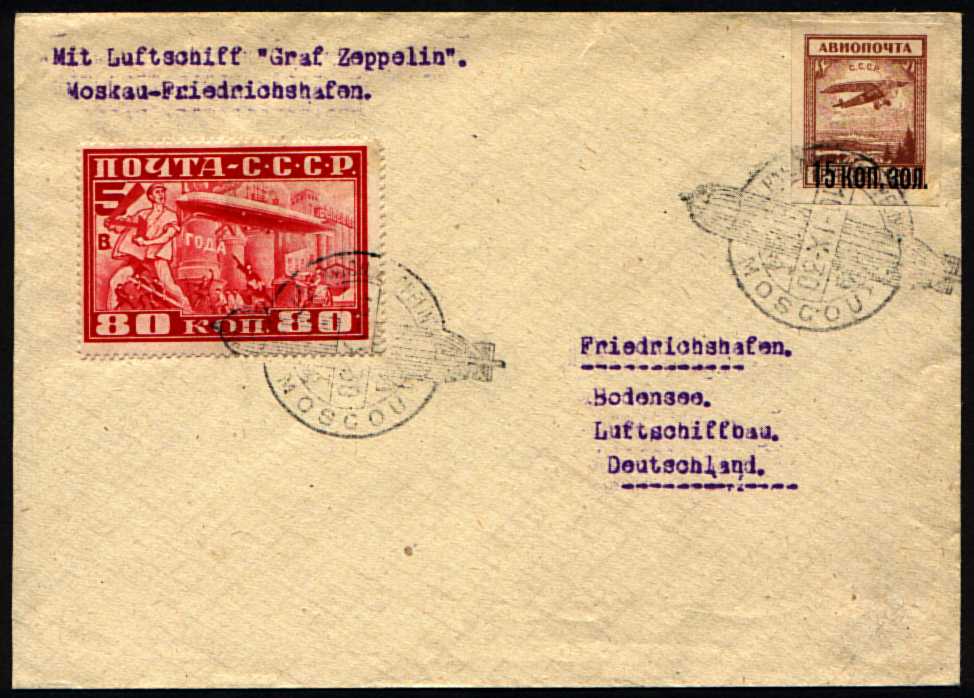 The pair of covers above were apparently among the 13,500 Russian cards and covers that made the first Zeppelin flight from Moscow to Friedrichshafen. Both were postmarked in Moscow on September 10, 1930, making them First Day Covers. They were also postmarked on the following day in Friedrichshafen (one on the back, which was more common for receipt postmarks).

Note the extra postage on both of these items. All covers with these stamps that I have seen are thus. Was this another part of the Soviet effort to complicate things? Eckener's usual deal on Zeppelin stamps was that he got most of the proceeds, so requiring additional ordinary stamps would have increased the Russians' share of the take. 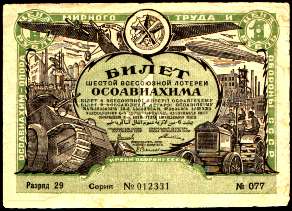 NOT A STAMP - The item above is a recently acquired Zeppelin favorite, and does not belong here, but I like it. It is a 1931 Russian Lottery ticket, includng a Zeppelin. I find it amusing because when I was growing up, in the 1940's and 50's, it was a standard joke on tv and in movies that the Soviets claimed they had invented EVERYTHING. They were famous for rewriting history to exaggerate the Russian role in science and technology, claimed it had been Russians who invented the light bulb, the radio, the telephone, the automobile, etc. So I interpret their use of a Zeppelin on this item as an attempt to take credit for that too. 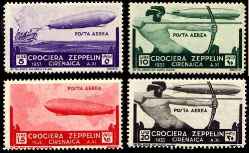 Cyrenaica, now part of Libya, was an Italian Colony from 1911-1951. The stamps above were part of its contribution to the Zeppelin saga in 1933, and say something about the flights of fancy the giant balloons inspired in people. There are two more stamps in the set, denominated 3 and 12 Lire. These stamps were issued to commemorate the flight of LZ-127 to Rome in May of 1933, and had everything to do with Cyrenaica's status as an Italian colony - the Zeppelin never even flew over the country, let alone stopped anywhere in it.

The set below were Italy's own issue for that 1933 flight to Rome. Mussolini and the fascists were already very much in power, and I attribute these (to me) slightly ridiculous images of "Zeppelin over famous sites of Italy" as a result of their self-important foolishness.

Paraguay has the dubious distinction of  "more Zeppelin Post stamps than any other country, including Germany", with 27 different stamps, though most, I concede, are overprints. I should also note that Paraguay (with a 1993 population of about 4.6 Million) has more airmail issues (nearly 900 by 1990!) than any other country, perhaps because, being landlocked, it depends much more on air traffic for its contact with the outside world? Although the Zeppelins did make many South American trips, and may have flown over Paraguay, I cannot find any record that they ever stopped there. Below are about half of Paraguay's zepp issues. None is valuable, but for some reason all have been counterfeited extensively. Some of these may be fakes. The triangular shape usually denotes an airmail stamp, by the way.

Even tiny Liechtenstein got into the postal act - the set on the cover below (Sc. C 15-16) were that municipality's SECOND set of Zeppelin stamps. They were issued on May 1, 1936 for the maiden voyage to the US of the Hindenburg, and depict both the Graf and the Hindenburg over scenes in Liechtenstein. The cover was postmarked May 2, so - alas - it is not a First Day Cover. 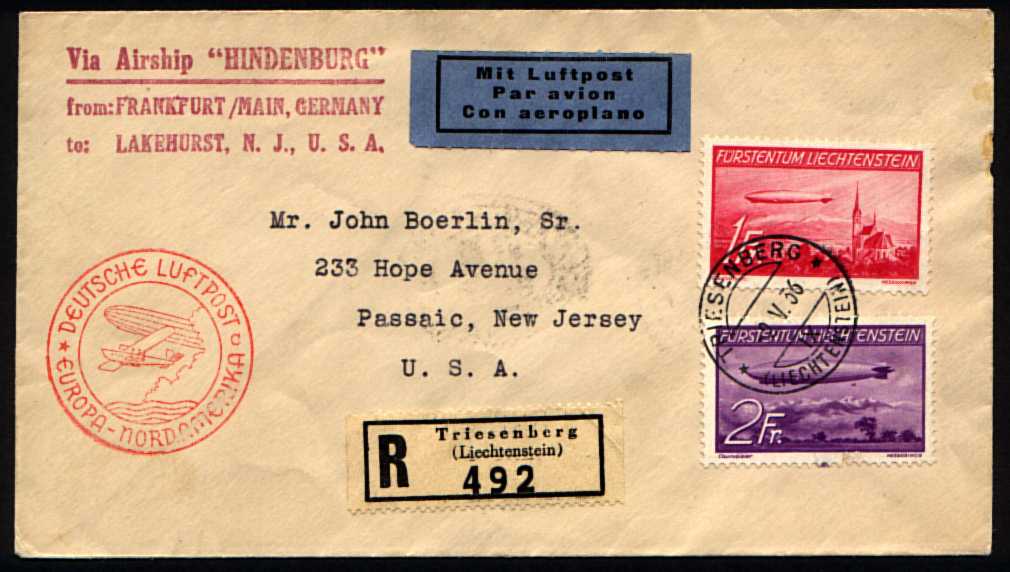