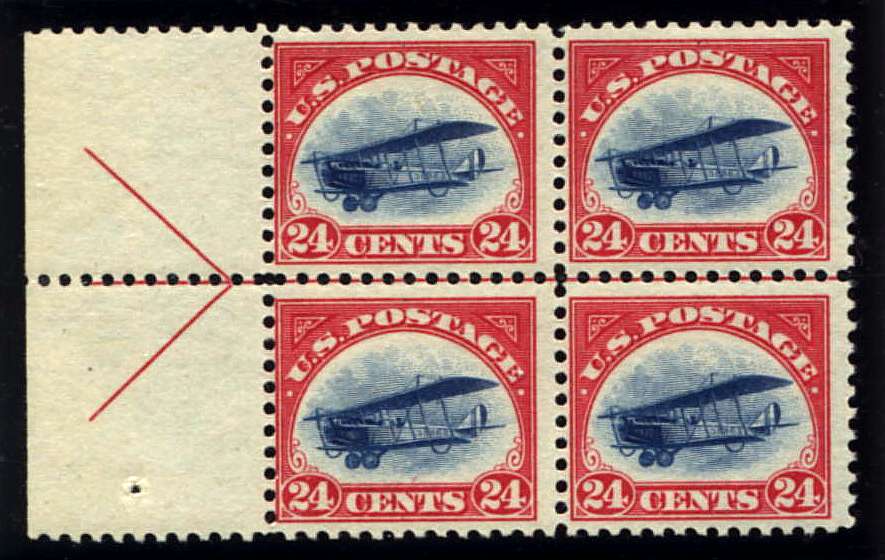 This is a "center-line block" of the first airmail stamp issued by the US, in May of 1918, but it is only the third Air Mail issue world-wide. The first air mail stamp was a single issued by Italy in May, 1917. The second was a set of three issued by Austria, in March, 1918. Here those are:

As you can see, all are overprints, so the U.S. stamp is the first design printed specifically for air mail postage.

Named the 24c Curtiss Jenny airmail stamp, the U.S. stamp was only the second bicolor issue produced by the BEP (the first was the six stamps of the 1901 Pan-American Expo set), and as had happened in that earlier instance, invert errors slipped out, giving us the most expensive and to my eye attractive of all invert errors, the Inverted Jenny.

One striking evidence of the speed with which Air Mail developed in this country is in the following table - note how rapidly rates fell (ref. = The Beecher Book).

Note also that the Scott catalog assigns numbers to stamps not by issue date, but by denomination within a set, so our first air mail stamp is C3, not C1. 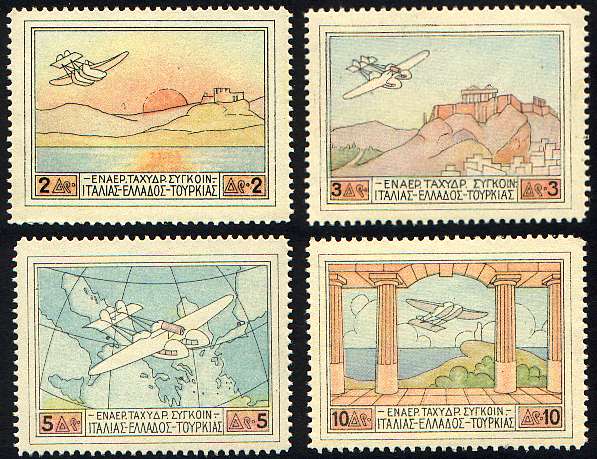 The set of stamps above are the first air mail stamps issued by Greece, in 1926. I bought them many years ago simply because I liked them, and am showing them here for the same reason.

A First Day Cover (FDC) is officially-speaking any cover carrying a stamp cancelled on the day it was issued. Today one can get a "First-Day cancel" up to a month or more after the actual issue date of a stamp, so most modern FDC's are really just souvenirs, with no postal meaning. Nonetheless, FDC's are a very popular collecting area. 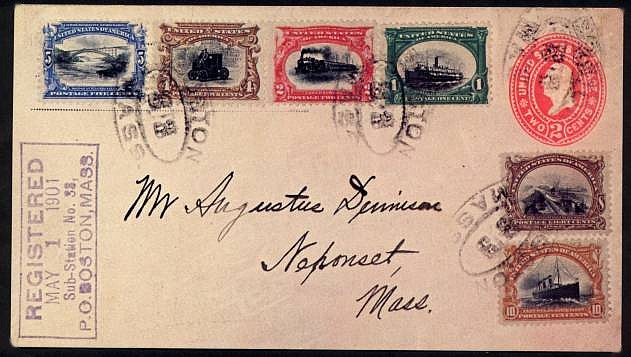 Most early stamps did not even have an official issue date. They were distributed to post offices whenever the print run was finished, and could be sold as soon as they arrived. Collectors of the stamps and covers of that period seek the Earliest Known Use (EKU). Starting in the 1890's, however, commemoratives did have issue dates, and the cover above is one of the earliest recognized First Day covers, bearing a full set of the Pan-American Exposition stamps issued on May 1, 1901. Obviously it was created as a souvenir or collectible item, but the concept was very new at the time, and this is one of only six known examples of these stamps on FDC as a set. It is valued at $12,500. 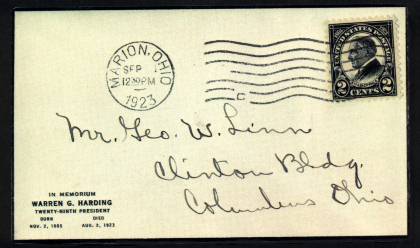 The very simple cover above is regarded as the first "cacheted" FDC. A cachet is any special text or design added to a cover to explain or illustrate its purpose, and all modern FDC's bear a cachet of some sort. The cover above (est. 200 made), valued today at $800, was created by George Linn, a philatelic dealer and publisher of the era, to commemorate the death of Warren G. Harding in 1923. 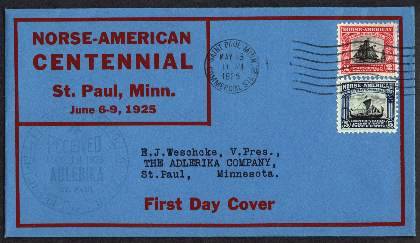 The concept of cacheted FDC's caught on slowly - this one, from 1925, which I like for its simplicity and visual appeal, is one of only 200, and valued at $300 today. It is generally described as the "first cachet" of its creator, E. J. Weschcke, but I have been unable to find any others he ever made, so apparently it is also his only cachet. 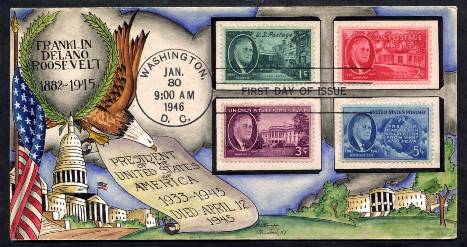 By the 1930's, commercial FDC's were very popular, and had become quite elaborate and beautiful. From the early 40's through the mid-80's, Dorothy Knapp produced exquisite all-over, hand-painted cachets, of which the cover above is a prime example. She produced fewer than fifteen each of most of her designs, and they are valued today in the $300 to $800 range. 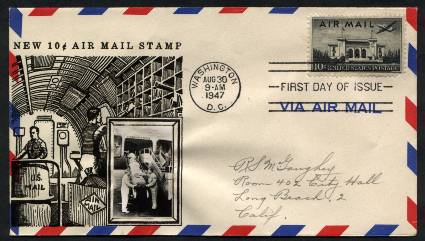 W. G. Crosby issued his cachets in the hundreds per design from the mid-1930' to the late 1940's, and they can be purchased for $5 to $10 today. Most, like the one above, have a very distinctive thermographed cachet with a small photo pasted in a framed area. 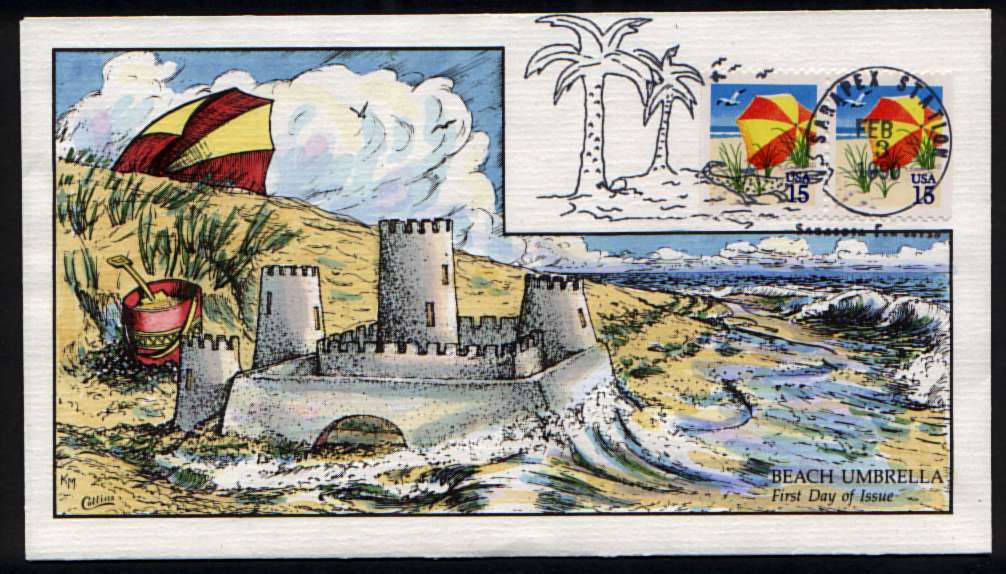 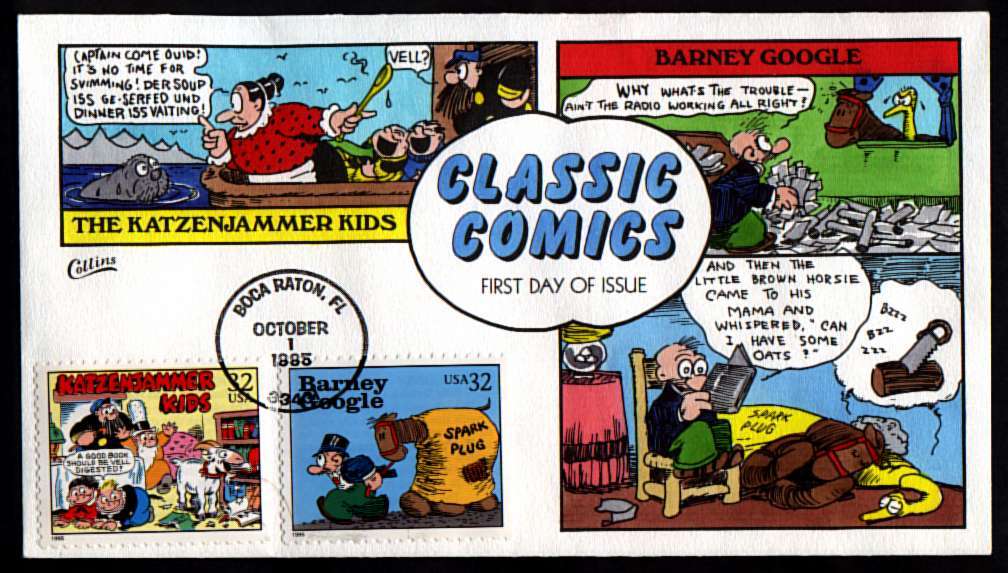 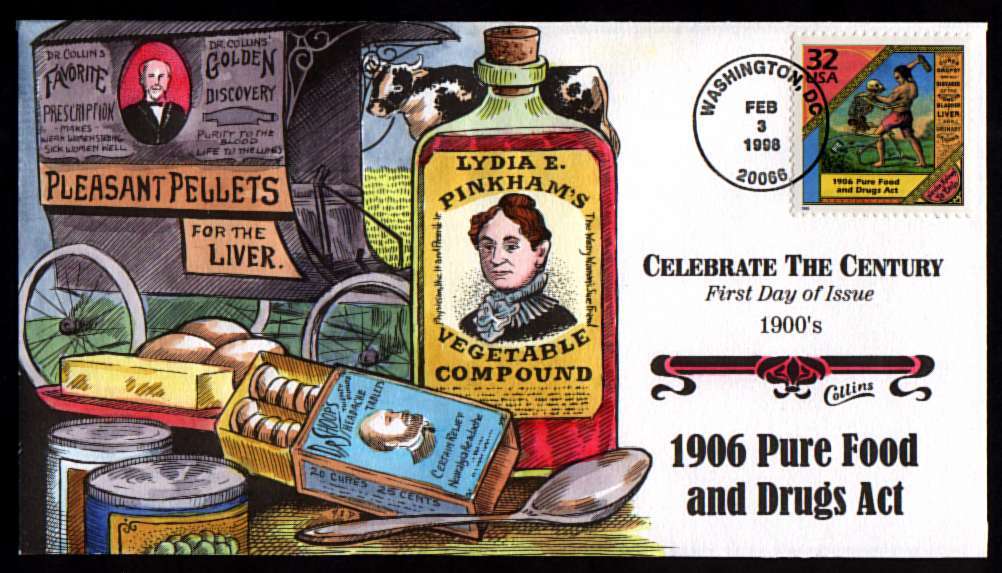 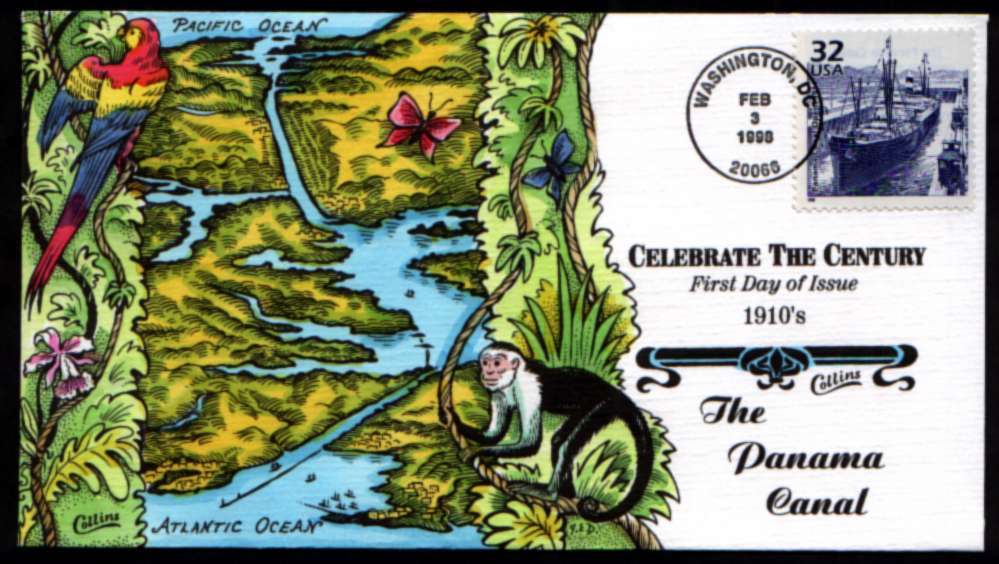 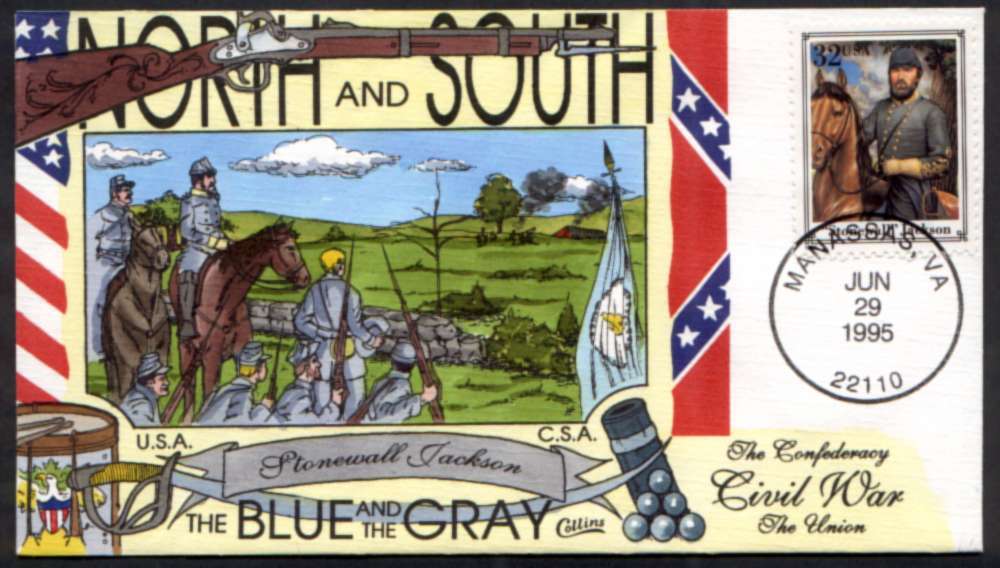 My favorite of the modern commercial FDC makers is Fred Collins, a few of whose recent designs are shown above. 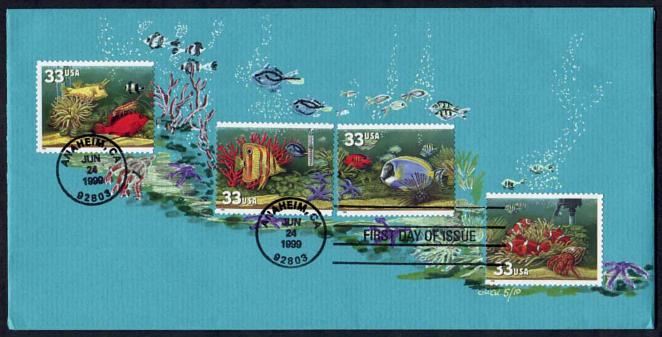 The First Day Covers above were created by a friend of mine, who does it just for fun. Some friends and I have been trying to persuade her to market her efforts, but so far she prefers to avoid the business aspects, which she is afraid would ruin it for her.

You will find many more FDC's throughout the pages of this exhibit, as they are a popular way to collect and display almost every type of stamp and theme.

Below is the image he sent, which makes me even sadder that the USPS abandoned their rate-change alphabet. Think of all the fun we could have had spelling other things! 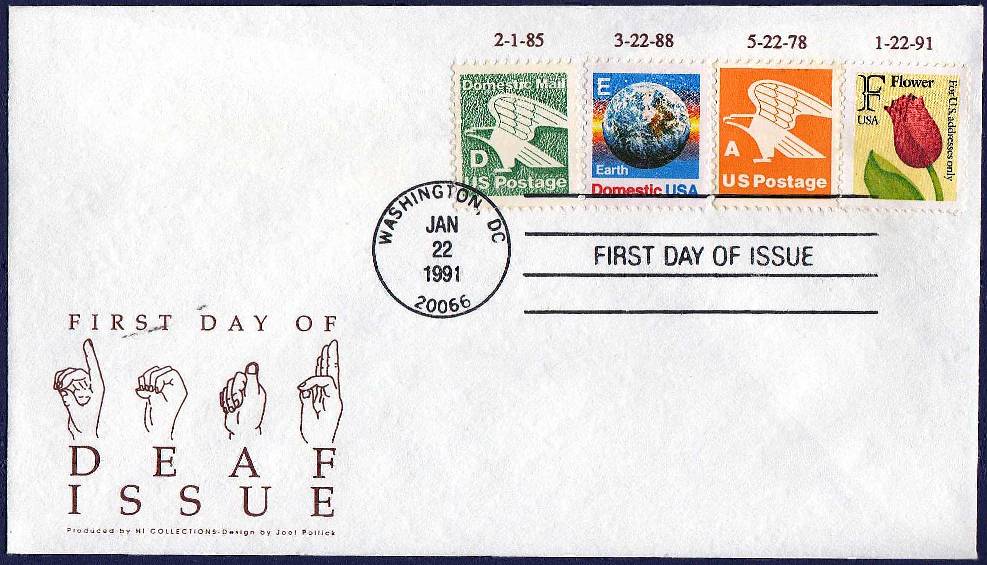 So your challenge now is to think of all the words you can spell with just the letters A through H. And congratulations to Ken and Al on a really clever FDC!

The American First Day Cover Society is the official organization of FDC collectors in the US. They publish a monthly journal and handbooks for collectors.

And if the topic of hand-drawn, hand-painted FDCs interests you, visit the excellent web site of Chapter 73 of the AFDCS - here is a link to their article on the history of HDHP-FDCs, at http://www.hpfdc.com/ansink.htm .