In the early days of the development of airmail service in the US, the inauguration of a new air mail route was a major event, often accompanied by ceremonies and souvenirs. The first official route, from Washington, DC to New York City, was inaugurated in 1918, but it took until 1924 before the first official coast-to-coast Air Mail service was established. With primitive planes, few airports, no radar, no CAB, no air traffic controllers - none of the things we take for granted - every flight, even over an established route, was an adventure. If the topic interests you, I recommend Aerial Mail Service, by A. D. Jones, published by the American Air Mail Society, and Turk Bird, by James H. Bruns, published by the National Postal Museum.

First Flight souvenirs became popular, and both the postal service and the airlines aided collectors by providing special service for First Flight Covers. The dates of first flights on new routes were published. One could submit a cover, marked to show the flight one wanted it carried on, and addressed to General Delivery at the flight terminus, with a return address on the back, and a note "Return to Sender". In the earliest days airline pilots signed such covers. At the originating end of the flight, the post office applied appropriate handstamps and/or cachets, and made sure the covers were placed on the proper flight; at the receiving end such covers were back-stamped to prove they had actually travelled on the designated flight. Finally, the postal clerk on the receiving end would, as requested, return the cover, sometimes with a "Return to Sender" handstamp, but often without, preserving the integrity of the souvenir. Note that nothing like an RPO cancel existed, so the whole arrangement was somewhat a matter of faith. In later days one did not need to use the General Delivery method, the system was more like First Day Covers: one sent the cover to the city of orgination, addressed to oneself, and it was cacheted, flown, and forwarded from the flight terminus to the address on the envelope.

First Flight covers used to be available routinely as souvenirs of the opening of a new route, somewhat as First Day Covers are still available, and they used to be a popular collecting area, but the USPS stopped supporting their creation a few years ago, so they may lose their appeal. The ones above interest me for additional reasons: the first two are franked with plate blocks that are scarce on cover, while the third has that rather dramatic typed admonition ("Positively must go on new air mail route...") - apparently it worked, unlike this one, ("Dispatched by train to avoid delay.")

If you would like to see some First Flight covers on which the cachet includes a train(!?), click here.

My thanks to Jim Graue (Editor of The Airpost Journal, the monthly publication of the American Air Mail Society), who explained to me how First Flight Covers were created. 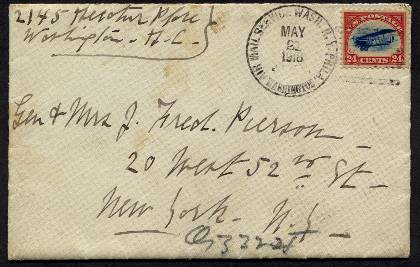 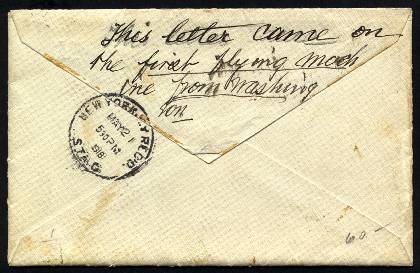 This rather dirty, not particularly distinguished cover is a favorite of mine. It is not a First Day cover for its stamp - that would be May 13, 1918, about a week earlier than May 21, when this cover was mailed. But it has that charming notation, written by the recipient on the back - "This letter came on the first flying machine from Washington", and it contains a brief letter that begins "Our greetings to you, dear friends, by The Air Ship Mail Service." It goes on to mention hospitals and convalescences, obviously in reference to WWI, which had not yet ended. The full text of the letter is available here.

If you would like to read an interesting account of the early days of aviation and airmail in the US, I recommend this page - http://www.navfltsm.addr.com/howitbegan.htm

This was the world's first Christmas stamp, in 1898, and has an interesting story, which may be apocryphal, but is fun nonetheless. The purpose of this stamp was to mark the inauguration of Imperial Penny Postage throughout the British Empire (2 cents Canadian was equal to 1 penny GB), and the original design did not include the inscription "XMAS 1898." Its intended date of release, moreover, was the birthday of Queen Victoria's son, the Prince of Wales, later to become King Edward VII. But when the British Post Master General was asked by the Queen when Imperial Penny Postage would become effective, and he replied "On the Prince's birthday", she replied with obvious disapproval "And what Prince would that be?" (The Prince of Wales was not Victoria's favorite.) Thinking fast, the PMG replied "Why, the Prince Of Peace, Your Majesty, of course." So the release date was changed, and this stamp had the extra inscription added. The stamp's usual name is the "Canadian Map Stamp," and it was remarkable for its day not only for its issue date, but also for its use of three colors. (Yes, Imperial Penny Postage did begin on that date.)

The change of the oceans' color (from pale lavender to ocean blue) was not intentional, but this was the first multi-color stamp Canada Post had attempted, and color variations were common in those days, so the mystery is not why they exist but why Scott chose to give them two separate numbers. Experts recognize at least four colors to the oceans, plus many other variations in color and design, so why stop at two? Autre temps, autre moeurs.

(Another web page with a more detailed version of the story of this stamp.)

Finally, collector and Map Stamp specialist extraordinaire Ralph E. Trimble
has published a delightful web page about the many design variations on this stamp - GO HERE.

The USPS seems to have been "pushing the envelope" with its designs and technology lately. Here are three examples of important firsts - the first US triangle stamps, issued in 1997 to advertise Pacific 97 (Ninth International Stamp Exhibition in the US); the first US stamp with a key part of the design created by actually cutting paper away from the stamp (the silhouette of Alfred Hitchcock in the upper left corner of the stamp released in his honor in 1998); and the first US semi-postal (the Breast Cancer Awareness stamp, also released in 1998). 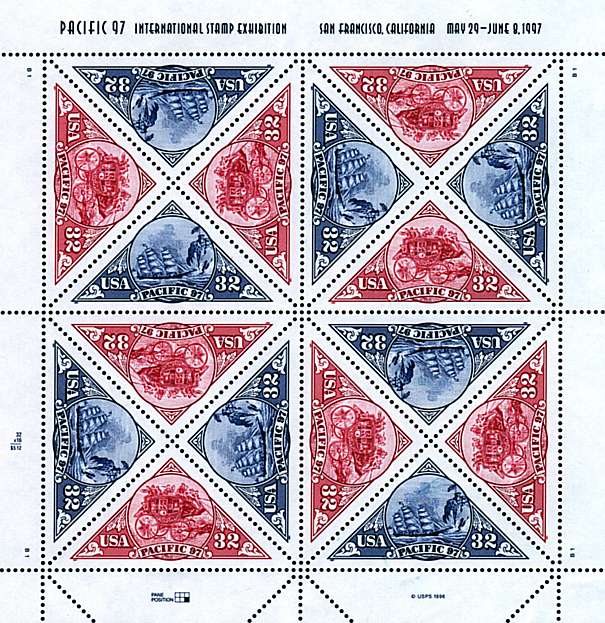 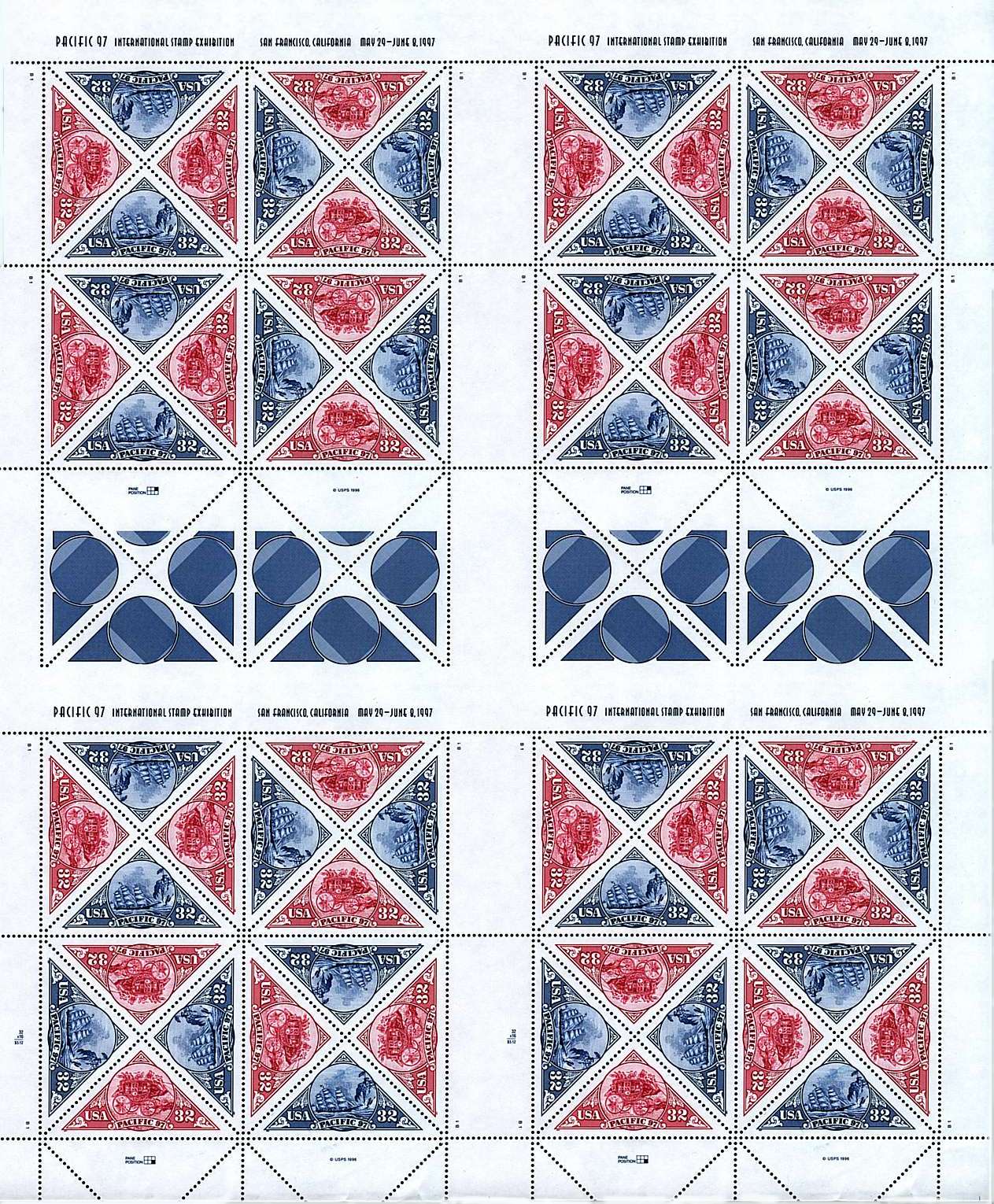 Unusual shapes are usually considered just a modern gimmick with stamps - Tonga was notorious in the 1960's and the 1970's for its stamps shaped like bananas, coconuts and watermelons. But the first triangle stamps were issued in 1853 by the Cape of Good Hope (now a part of the Union of South Africa), and the shape has been used with unusual restraint and good taste since. Often its goal has been to distinguish its stamp's purpose, usually for Air Mail.

It seemed an appropriate choice for these USPS stamps in honor of Pacific 97. And it provided an opportunity for a very creative and attractive layout, as well as some interesting but ultimately puzzling doodling on the full press sheet that was also available. By the way, the design was recycled from one created (but rejected for lack of time) for the Centennial Olympic Games stamp in 1996. Read the fascinating story in George Amick's excellent Linn's Stamp Yearbook for 1996.


First Cutouts on US Stamps

Silhouette in top left corner of stamp is a diecut - you can see the paper behind showing through!

Modern technology makes it easy to produce innovative design features that would have been impossible only ten or fifteen years ago.
The silhouette cutout on the Alfred Hitchcock stamp is a clever example, though in fact it is produced by the same process that creates the perforations - including the stars in the corners of the stamp.
Rather than being punched out by pins, as in the older production method, all the missing paper on these stamps is removed by a grinder.

Semipostals have been common in Europe for many years, but are not popular with most collectors, who feel they are unfairly taxed by such issues, in effect compelled by their desire for a complete stamp collection to subsidize causes they might prefer not to support. This first US semipostal was heralded as the "opening of the flood gates," and a sure failure, but sales have been good; and while Congress has mandated that more should be issued, they have also given the USPS control over the program. The original plan was for one every two years through 2010. So thus far it seems none of the ill predictions has proven true. To date (July, 2013) we have four U.S. semi-postals, the original one for Breast Cancer research (still on sale, thanks to some very aggressive lobbying by California Senator Diane Feinstein); Heroes of 2001, for the familes of the 9/11 rescue personnel victims (no longer available); Stop Family Violence, to fund programs to fight domestic violence (also off sale), and Save Vanishing Species (still on sale), a wildlife conservation stamp to fund the Multinational Species Conservation Fund.

Lest I seem too optimistic and naive, however, I should note that the Breast Cancer Research lobby is campaigning to have their stamp kept available indefinitely - the USPS made the mistake of pushing it too hard by reprinting it and leaving it on sale too long, I think. Other countries treat these more like commemoratives, with small fixed printings and/or limited sale dates. They also issue many more, of course, so I'd better shut up - from a collector's point of view, the U.S. approach is much better. 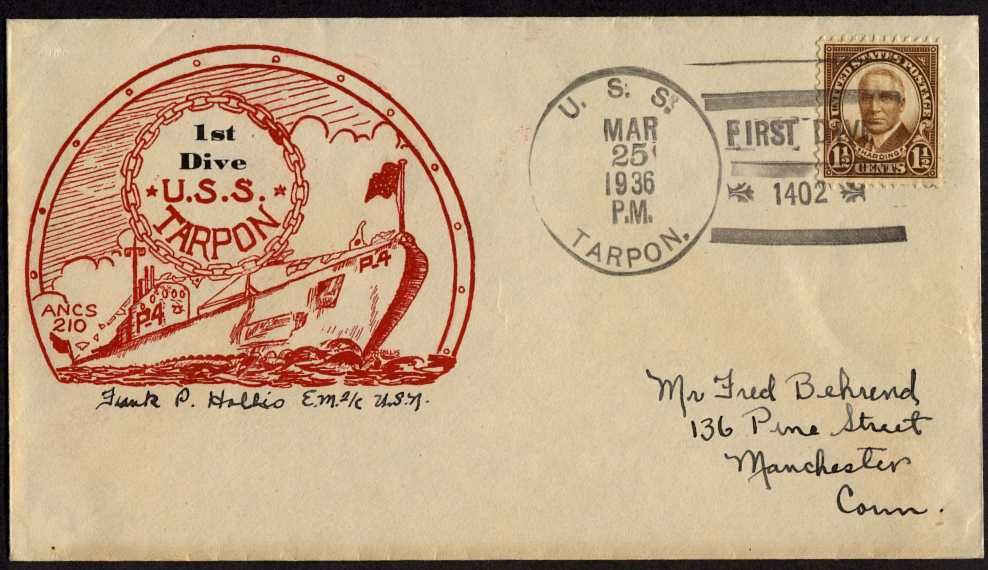 And yes, there are even First Dive covers. When you're going to be stuck inside a submarine for six months or so, you take entertainment wherever you can find it!