Poster stamps are a subset of Cinderella stamps.

A Cinderella stamp is essentially any stamp not produced by a government for use as postage,
so it includes advertising stamps, charity seals such as Christmas and Easter seals,
and officially-issued stamps such as tax stamps, telegraph stamps and locals.

Poster stamps are advertising stamps, and usually poster-like in their appearance.
Many are indeed just reduced versions of actual posters, and were issued in
conjunction with the events for which the posters were produced. The image below, for
the 1932 Olympics Games in Los Angeles, was produced as a poster, post card, stamp,
envelope cachet, lapel pin, program cover, etc. Even in 1932 the Olympics were already big
business, and heavily marketed!

(Click on any image to see a higher-resolution version.) 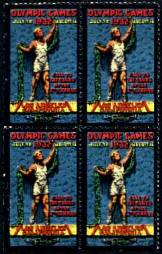 Click HERE to see my pages on ALL of the Poster Stamps of the Olympic Games.

One of the attractions of poster stamps for me is the uncertainty -
there are few catalogs of what exists, so one cannot buy albums or
checklists and pursue a "complete" collection.
Like rare butterflies or UFO's, one pursues elusive items merely on hope,
spurred on by reports of rare "sightings".

My own favorite poster stamps fall into various categories, such as trains, olympics, multi-language sets, and multi-year sets.

The poster stamps I find most appealing were produced in the early part of the
twentieth century, when large international fairs were very popular.
For most of those fairs, poster stamps were issued both as advertising
and as souvenirs, and printed in all the major languages of the world.

The set below is popular for its exceptional design. To date I have found thirteen different languages, and seventeen distinct versions, plus several varieties. There are five additional variations with black borders. Note that one of the stamps in Chinese has the language (in German) printed in the selvage, which leads me to wonder how these were issued - did a sheet have all stamps of the same language, or did it have one each of every language? Or did they put the language next to the Chinese stamp just so people would know what it was?

Answers to most of these questions, images of most of the stamps, and much more about the Bugra HERE!

Having spent a lot of time and money to create an appealing and effective design,
why not use it over and over again?
That seems to have been the philosophy of the promoters
of the fairs for the sets shown below, and I enjoy trying to find all the versions.

Looking through my collection recently I noticed the three seemingly related stamps below, for a similar show held in Chicago.
Two of the shows are in the same years as the National shows, suggesting that the concept was popular at the time.
The designs are all different, but all three include a train, which is why I acquired them.

One of the longest-running U.S. sets of poster stamps is those issued for the
Chemical Industries Exposition, now called "Chem Show".
I have created a separate page for that set, as they have become an obsession.
One even thas a train! GO HERE.

Click here to access my web page about what may be the longest multi- year set
in the US, the poster stamps created to advertise the Chicago International Live Stock Exposition.

The above stamp, for the Swedish Industries Fair in Göteborg, Sweden, is a favorite of mine,
both for the design, and the fact that it is the first of a set that spans fifty years, 1918-1968!
In this case the set clearly spans the War, with some design modifications, and there are four
different languages for some of the early years, so there could be many more in the complete set.
For some history of the event - click here.
It was last held in 1973, though the name survives in the form of an exhibition center.

I own or have seen stamps for every year from 1918 through 1950, EXCEPT the following: 1923, 1941, 1942.
Click on the image above to see tham all.
I suspect there are additional languages for some of the years. If you can fill
in any of the gaps with information or scans, please email me at

An alphabet is an old reliable concept for presenting a topic in an entertaining way
(as my web site itself attests!), and has been used on poster stamps, of course. The set
below, designed by F. G. Cooper, for New York Edison in 1913 to promote electricity,
is quaint and charming today, when we are exhorted to use LESS, not more, and electrical
conveniences are so much taken for granted that it is hard to imagine a time when they were
a novelty, and people had to be persuaded to try them.

These were issued with four different background colors, and both with and without the printer's monogram at bottom.

For images of all four, plus some thoughts on their printing formatCLICK HERE.

In case you prefer to save your eyes from the torture of trying to make out the text on the set above,
here it is all on one page.

10/13/07 - I just acquired this new group of twelve New York Edison poster stamps
with a similar concept, to show all the ways the new marvel, electricity, could be used to make life easier and more pleasant. 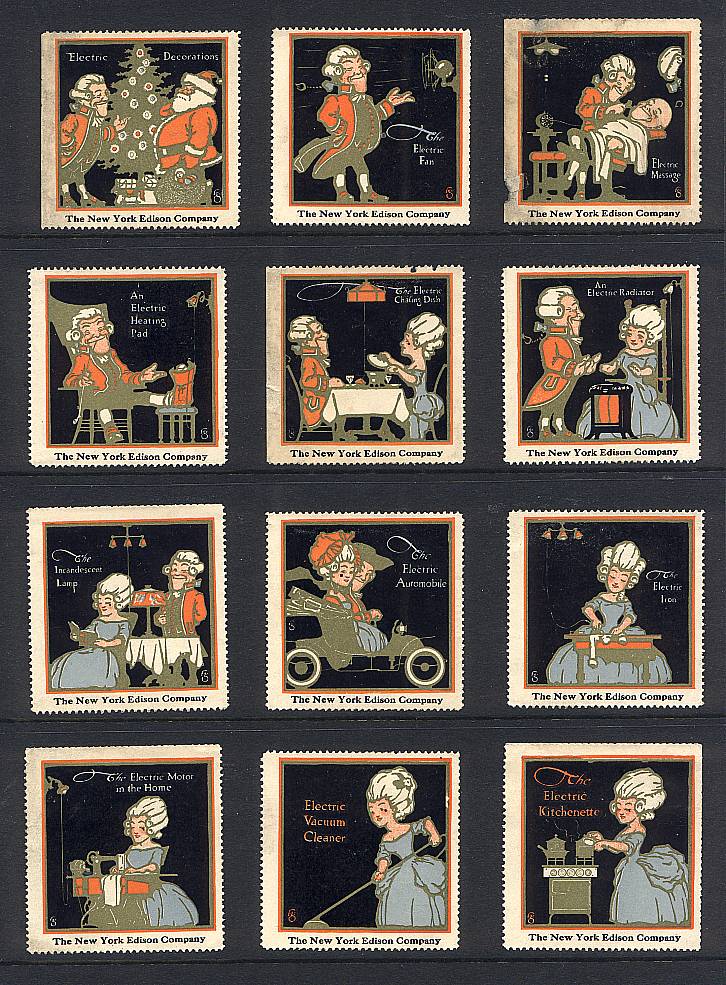 I can't decide which set was produced first.
The figures are almost identical on both - those hairdos!
And comparing the autos, the irons, and the vacuums,
there's nothing that looks more modern about either. 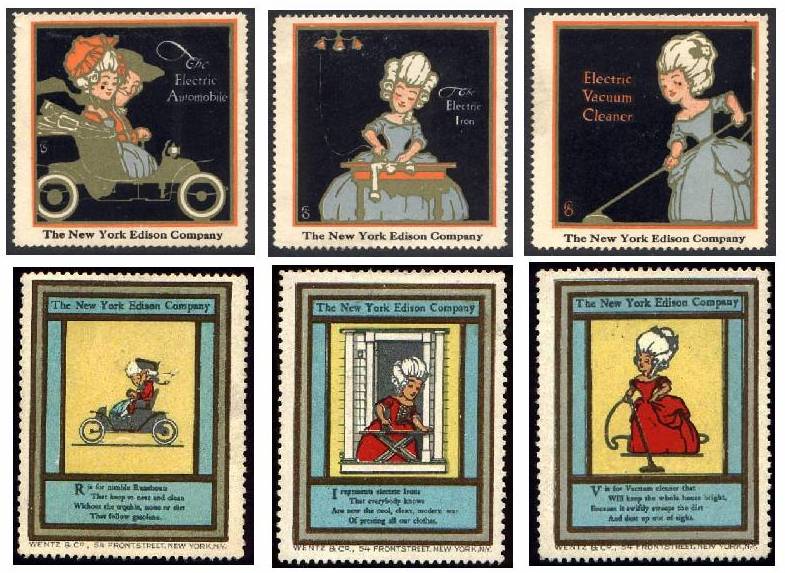 I suspect the A-to-Z set was produced later, though.
Someone saw the first set and said, "You could do one for each letter of the alphabet!"

If anyone out there has a better argument, send it to the author -

Below are three more New York Edison advertising stamps from the same period, and by the same designer, F G Cooper.

And finally, here are four more designs that look like Cooper's work, for the
German company AEG (Allgemeine Eliktrizitätsgesellschaft), another producer of electrical appliances. 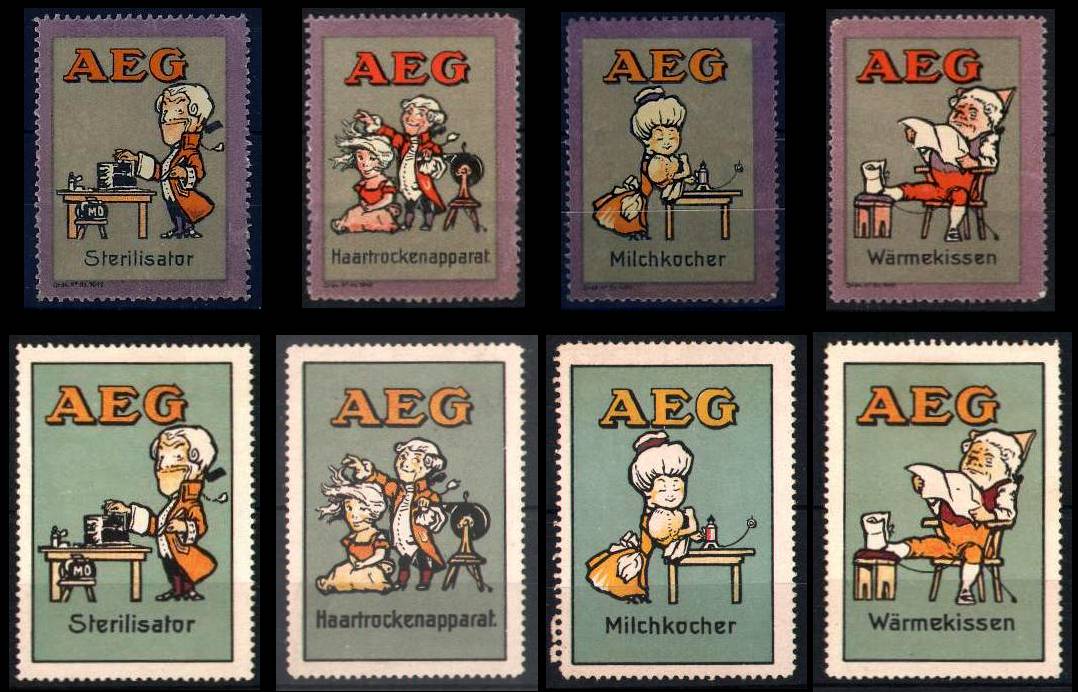 According to THIS PAGE


F. G. Cooper (a native of Oregon) arrived in New York City in 1904, and began a
lengthy career as a freelance designer and illustrator that would include a fifty
year association with New York Edison (later ConEd), creating posters, ads,
calendars -basically a visual identity - for the company.

He was a prolific illustrator, designer, and calligrapher, whose work is still considered inspirational by modern designers.

The set above are Queens of the Poster Stamp world, both for their
striking graphic artistry, and for their use of the female figure.
Unfortunately, none has a year date, so all I can say about
their dates of issue is that I suspect it is in the 19-teens.

This set illustrates one of the effects of scientific and technical progress during the twentieth century.
These technologies were thought of as closely related in their infancy. Today no one would think to connect them.
The last item illustrates this divergence.

1916 was the 250th anniversary of the founding of Newark, New Jersey.
They celebrated in a big way, including a prestigious competition
for the best advertising poster design.

And because it was the height of the poster stamp craze,
the winning designs were produced as poster stamps as well.

Though I couldn't find the story of this first design,
I believe it was commissioned before the contest as the "official"
advance notice of the event. I love its bold colors and simple design,
which work very well on a stamp.

Second prize - why was this one not produced as a poster stamp? I think I know.

Official Guide to the celebration: https://archive.org/details/officialguideman00comm

Click here to access my web page about the 1936-1951 Poster Stamp Bulletin of the National Poster Stamp Society.